Villains Wiki
Register
Don't have an account?
Sign In
Advertisement
in: Kamen Rider Villains, Doctors and Scientists, Elderly,
and 9 more

Scientist
Doctor D is a scientist who works for Gel-Shocker and a supporting antagonist in the original Kamen Rider Tokusatsu series.

He was portrayed by Tadashi Araki in his initial appearance in the Kamen Rider series and by Yuji Kishi in Ninninger Vs. Drive.

Doctor D analyzed Takeshi Hongo's and prepared a trap to immobilize him. Gel-Shocker initiates his plan, but they are foiled when Hayato Ichimonji returns and saves Hongo.

Two years after Gel-Shocker's demise, Doctor D continued his research in secret to develop a way for Shocker to manipulate history. However, before he could finish his research a lab accident caused an explosion to erupt in his base and killed him.

However, his cells were saved by the Great Leader of Shocker and given to Roidmude 089 when he allied with Shocker. Using his cells, 089 assumed the form of Doctor D and used his research to create the History Modifying Machine, allowing Shocker to manipulate time to create a world where they reigned supreme. 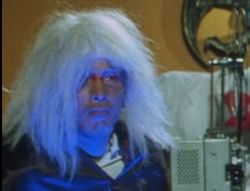