Doctor Death is an evil genius and a villain in the DC comics, serving as one of Batman's earliest Rogues.

A villain named Dr. Death has created a deadly toxin that he intends on releasing upon the city's wealthy elite. But he is concerned that the Batman may cause him some trouble. He writes a classified ad in the Daily Globe beckoning Batman to meet him at an arranged location. Batman, recognizing that it is a trap meets him anyway. Dr. Death's goons try to kill Batman, but he manages to beat them down and escape.

Sometime later, Dr. Death sends his bodyguard Jabah out to poison one of Dr. Death’s entrepreneurial enemies. Batman saves the man’s life and trails Jabah back to Dr. Death's hideout. The two get into a fight and during the scuffle, Dr. Death’s laboratory catches fire. The flammable chemicals explode and Batman presumed that Dr. Death died in the blaze.

Less than a week later Bruce Wayne read an article in a newspaper about the strange death of a man, and he deduced that only Dr. Death could be behind that crime, when he interviewed the widow of the dead man he confirmed his suspicions, he had managed to escape the fire trough a secret door, but his face had been horribly destroyed, he had also lost all his fortune and was blackmailing millionaires trying to reestablish his funds. His plans were once again foiled by Batman, who discovered that Dr. Death was hiding behind the identity of Ivan Herd, a diamond seller, Batman trapped Dr. Death and left him to be arrested by the police.

Dr. Karl Hellfern was a prominent opponent of the overuse of chemicals in modern society. As Doctor Death he attempted to blackmail Gotham by spraying a dust over the entire city. This dust was a potent allergen developed by Hellfren that caused death after 48 hours. The city flew into a panic as millions fell ill and newly-elected Mayor Hamilton Hill refused to cooperate. Doctor Death was eventually taken down by the Batman and an antidote was spread over the city by police helicopters.

The modern version of Doctor Death produces biological weapons, selling them on the black market to the highest bidding terrorists and other criminals. He is a bald, gnome-like man wearing a coat and an oxygen mask, who has a history with Batman. After Batman and Batgirl failed to shut down his auction of Formuna "O", which could convert human bodies into oil, Death was employed by the president of Tarakstan, who wished to use the weapon on his own population. Batgirl and Batman take down the operation, but Doctor Death releases his poison into Tarakstan, however the young hero Black Wind sacrifice prevented it's use

In later appearances, Doctor Death had taken on a new look, wearing a overcoat, hat and gloves, and a gas mask. He was seen joining forces with the new Black Mask in his Ministry of Science.

Doctor Karl Helfern was a scientist working for Wayne Enterprises. Hired by Lucius Fox, along with fellow doctors Bill Kelver and Del Paji, he was known as the smartest among the group, working with nano-medicine to try and create a serum to make human bones harden upon impact to prevent breakage. The experiments were a failure and, presumably, led to his decreasing mental stability. Some time after being fired from the company, Helfern took up the mantle of Doctor Death, killing the other members of his research group by injecting them with his failed formula, causing their bones to grow uncontrollably and rip them apart from the inside.

Shortly after becoming Negative Man, now living in a room in his mother's boarding house, Lawrence "Larry" Trainor looks for work—normal work. Visiting a "Dr. Drew" who wants to use Larry's power and his own genius, Larry rebuffs him, refusing to "exploit my strange power! I'm gonna lead a normal life using normal human talents!". Drew know that, when Larry is crushed in his search that he will return.

Larry is offered a job, dependent on his powers, not his abilities as a pilot. His old company offers to put him on a pension, but he refuses. Returning to Dr. Drew, whom Larry secretly refers to as "Doctor Death", he is tested as Negative Man between two electrical arcs, ostensibly for protecting the Earth from alien invaders. Larry discovers they are really to destroy the planet. Death temporarily traps Larry in a lead lined room, but he escapes and finds and destroys the full-scale transmitters that Death would use to blackmail the world. (Presumably, Larry lets him go, as he does not appear to call the police and Drew later returns).

Some time later, Larry accepted a commission to fly a plane towards a dangerous, volcanic island. Doctor Death learned of the charter and arranged to sabotage Trainor's plane, killing him. When Larry succeeded and returned, he revealed Dr. Death's disguise as Charlie, Larry's new mechanic who sabotaged the plane.

Exerpt from Scribblenauts Unmasked: This mysterious antagonist of Batman works for Hush's family business while moonlighting as a chemist for the Guzzo Mob. Taking on the name Dr. Death, this poison expert deals out toxic wares for the highest bidder on the black market. 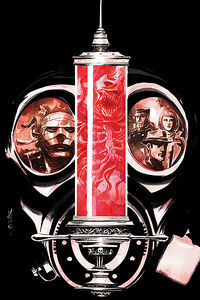 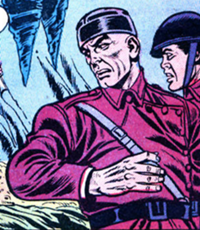 Doctor Death as a Blackhawks villain from Quality Comics. 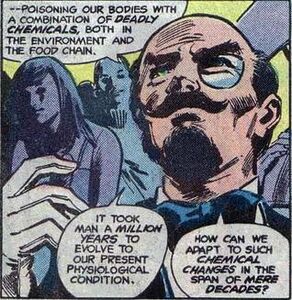 Doctor Death of the Silver Age.