Doctor Destiny is a supervillain in DC comics, he is a rogue enemy of the Justice League, The Sandman and Batman. There have been other characters with the same name, but John Dee is the most well known incarnation.

Doctor Destiny first appeared in Justice League of America Vol 1 #5. He was originally a criminal scientist named John Dee who used an antigravity device and a Green Lantern costume to break into the Justice League's headquarters, He then used a "will deadening beam" to destroy their free will and planned to destroy them by sending their headquarters into space, but the real Green Lantern showed up and defeated him. Eventually his mother, Ethel Dee, gave him Morpheus' Dreamstone. He equipped this magical artifact to a machine called the "Materioptikon", and it gave him to power of dream manipulation, making his dreams reality.

He called himself Doctor Destiny and again battled the Justice League. His power was so great he had to be hypnotised to stop his ability to dream, This caused him to lose his mind and he was sent to live in Arkham Asylum. He escaped later on and used the Sandman to turn other people's dreams against the Justice League, but he was again defeated and Sandman was freed. When his mother died, he again escaped Arkham, reclaimed the Dreamstone, and went on a rampage.

Morpheus, creator of the Dreamstone, destroyed it and restored Doctor Destiny's ability to dream. Doctor Destiny was returned to Arkham powerless and with his sanity slowly returning. Later on though he learned that the Materioptikon maintained some of his former powers. He used it to trap the Justice League in Atom's dream of a world ruled by fascist superheros. Blue Beetle helped them escape and he was defeated yet again.

Doctor Destiny is a brilliant scientist who built things like an anti gravity device. Eventually through the Dreamstone and the Materioptikon gained dream manipulation, which can bring his dreams to life. When hypnosis cost him his ability to dream, he began using other people's dreams.

The man who became known as the Phantom of Washington was once a French soldier named Achille Destinee. In the 18th century, he served in the Napoleonic Wars as a military engineer and general under Napoleon Bonaparte himself. When Napoleon invaded Egypt, Destinee explored the underground tombs where he discovered an ancient device capable of wielding incalculable power. After the war, he relocated from France to the United States where he was an apprentice under patriotic statesman Benjamin Franklin. In 1814, Destinee approached President James Madison and offered his services to repel the British invasion. He showed him his artifact and swore that he could save the capitol. Madison rebuked his offer believing Destinee to be little more than a crackpot.

Destinee decided to take matters into his own hands, so he rode off towards the Capitol Building determined to destroy the British soldiers. One soldier got the drop on him however, and fatally stabbed him with his bayonet. Before dying, Destinee hid his artifact inside the dome of the Capitol Building and swore that he would rise from the grave to haunt those too ungrateful to accept his aid. The first recorded sighting of the Phantom of Washington was in 1861 when he appeared before President Abraham Lincoln at the onset of the American Civil War. He appeared again to President Woodrow Wilson at the early days of World War I. He appeared again in the presidential limousine of President Franklin Delano Roosevelt in December 1941 on the day that the Japanese attacked Pearl Harbor.

Little is known of the ghost's activities following World War II, but for the fact that he usually appeared at the onset of a war, always offering the same advice he once presented to President Madison. Enraged that no one would ever accept his aid, the Phantom decided to take his anger out upon the entire city. He used the spectral powers at his disposal to wreak havoc with notable landmarks including the Lincoln Memorial, the Washington Monument and the Capitol Building. Rex Mason, the hero known as Metamorpho, was present in the city during this string of attacks and used his elemental powers to combat the Phantom.

During the melee, greedy inventor Simon Stagg stole the artifact and took it to Fort Knox in the hopes of using it to purloin the gold reserve. The Phantom and Metamorpho followed Stagg's trail, and the Phantom entered a sea of molten gold in an effort to retrieve his artifact. Metamorpho caused a chemical reaction in the liquid gold that dispelled the essence of the Phantom, seemingly for all time. Presumably, the Phantom’s Egyptian artifact was destroyed as well.

Doctor Destiny appears as a villain in Justice League. His origins are altered somewhat for the TV series. In the Justice League episode "Only a Dream", John Dee is a small-time criminal. Formerly a low-level employee of LexCorp, Dee was arrested after the Justice League caught him guarding smuggled weapons. Sentenced to a lengthy prison term, Dee blamed the Justice League for ruining his life and fantasized about destroying them, and being welcomed by the other super villains as the greatest of them all.

In prison, Dee offered himself as a test subject for the Materioptikon, in this series a device that would affect a person's mental power. On learning that his wife was leaving him, Dee's obsession with destroying the League increased. During a mass breakout, while the League and the police were busy with the other prisoners, Dee hooked himself up the Materioptikon and turned it to full power. Escaping the prison, he discovered he now had the power to enter human minds while they slept and manipulate their dreams. The police and the JL were unconcerned with his escape, believing him to be an unimportant criminal. Dee decided to live out his fantasies for real, and gave himself the name Dr. Destiny, and created an illusory skull-faced appearance.

Dee's first act was to take revenge on his former wife Penny. Invading her dreams, he trapped her in her sleep, and, it is strongly implied, tortured her so severely that she died in her sleep. He then entered the minds of the Justice League members, trapping each of them in their own nightmare where they would either die or go mad.

The Flash dreamed that he was unable to slow down, to the point that the entire world is frozen around him forever. Green Lantern dreamed that he had become an outsider, and all of his friends and neighbors now saw him as a stranger and were unable to understand him. Superman became trapped in a nightmare that his powers grew beyond his control and began taking the lives of everyone he cared for. And Hawkgirl dreamed that her wings were locked together and that she was buried alive in a coffin. Only J'onn J'onzz and Batman stayed awake to trace the crisis to Dee.

While J'onn entered the sleeping Leaguer's minds to guide them out, Batman fought off exhaustion to trace Dee to his hideout in an abandoned warehouse. Using a commercial jingle to block Dr. Destiny from his mind, Batman was able to confront him and beat him in hand to hand combat.

He make his first live action appearance in Arrowverse crossover Elseworlds under the name John Deegan.

Destiny appears as the main antagonist of the animated film Justice League Dark, voiced by Alfred Molina. This version is an evil sorcerer and former opponent of Merlin's and Etrigan the Demon. Destiny was said to have been a former man of science by Merlin in Arthurian times before turning insane after wielding the power of his personal artifact, the Dreamstone. With it, he brought many towns to their knees by making them live their worst nightmares, but a group of knights led by Jason Blood attempted to defeat him. All of them were mortally wounded, forcing Merlin to unleash the power of Etrigan, which forced Destiny's soul into the Dreamstone. In the climax of the film, it's revealed that John Constantine's old friend Ritchie Simpson made a deal with Destiny that would give him immortality to cure him of his disease. However, Destiny exploited a loophole in their deal by possessing him and wreaking havoc in a nearby city. While he was able to defeat Swamp Thing and Etrigan, Destiny was ultimately defeated by Constantine and Deadman, and the Dreamstone ends up destroyed along with Destiny. 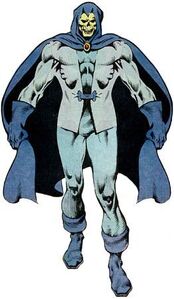 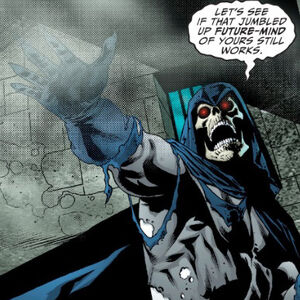 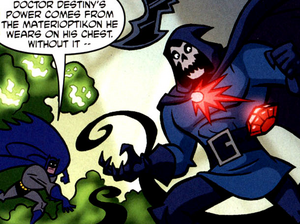 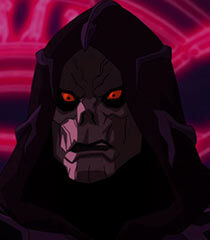 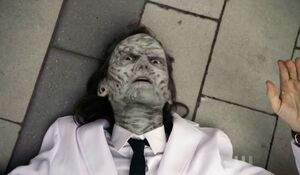 Dr. Destiny after being defeated in Elseworlds