Villains Wiki
Register
Don't have an account?
Sign In
Advertisement
in: Doctors and Scientists, Sadists, Animals,
and 29 more

Transfer the brain from Mickey to Julius (succeeded)

Mentally Ill Scientist
Doctor Frankenollie is the secondary antagonist of the 1995 Mickey Mouse short film Runaway Brain. He is depicted as an insane monkey and a parody of the infamous Dr. Victor Frankenstein.

He was voiced by Kelsey Grammer, who also played Stinky Pete in Toy Story 2, Sideshow Bob in The Simpsons, and Hunter in Storks.

Doctor Frankenollie is a mad scientist who attempted to switch Mickey's brain with that of his giant monster Julius. He put an ad in the newspaper promising to pay his employer nine-hundred and ninety-nine dollars. Mickey, who is looking for such payment to fulfill Minnie's desires to go to Hawaii, answers the ad and falls into Frankenollie's trap. Frankenollie prepares to operation by attaching helmets to Mickey and Julius' heads before activating a switch, laughing maniacally.

Mickey awakes to find himself in Julius' body, thus the operation is successful. Mickey finds a charred Frankenollie and tells him to change him back, but Frankenollie's body disintegrates and turns to a skeleton in Mickey's hands. 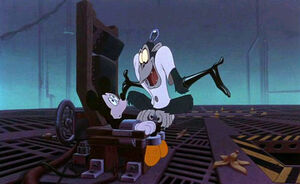 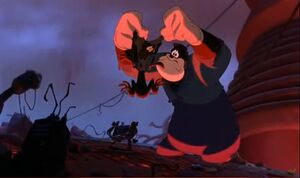