Manipulating events in the DC multiverse.

Experiment with the nature of the "Metaverse" (formerly).

Save Prime Earth and his own world (succeeded).

Doctor Jonathan "Jon" Osterman, or better known as Doctor Manhattan, is one of the main characters of the comic miniseries and film Watchmen, and one of the main antagonists of the DC Comics universe, specifically during the New 52 and Rebirth eras, as well as the Doomsday Clock storyline.

He is a nuclear physicist who would later be bestowed with vast reality warping and omniscient abilities following an accident that seemingly killed him. Following the events of Watchmen, he would go on to become a major antagonist in the mainstream DC universe, rewriting and manipulating numerous events and character histories for unknown reasons. He is notable for his greatly detached views on humanity, as well as him being the only superhero with actual superpowers in the Watchmen universe.

While Doctor Manhattan was seen as the "bigger bad" of the DC multiverse for the majority of Doomsday Clock it has been revealed as of "Doomsday Clock #7" that Manhattan is not the malevolent entity DC originally made him out to be and his "bigger bad" status has been usurped by Ozymandias, who is the current main antagonist of the series.

Manhattan becomes a notably darker figure starting from Flashpoint in which he enters the DC multiverse proper and uses a misguided Pandora to convince Barry Allen to merge three separate timelines in order to create Prime Earth - the merger allows him to erase 10 years from the reset universe, this also causes a massive reality-warp that alters the pasts of many characters and even brings back many formerly deceased characters.

He then stops the wizard Shazam from revealing to Pandora how to open a skull shaped box and murders both Owlman and Metron after they try and gain access to the secrets of the universe.

After these events Manhattan continues to manipulate the DC multiverse on a massive scale by causing Wally West to be removed from history via having Abra Kadabra trap him inside the Speed Force, only for West to be saved by Barry - this causes the Rebirth era of the DC multiverse to occur.

It is in this new era that he murders Pandora after she realizes that he was the one responsible for all the sins she had been blamed for, this leads Barry and Batman to investigate the strange occurrences and they learn from Lilith Clay that "Manhattan" was a prominent name in Kadabra's mind when he removed Wally from history.

Zoom then attacks Batman as he is studying a blood-stained smiley face button in the Batcave, however when Zoom picks up the button he is teleported away - only to return quickly, horribly mutilated and half-mad, he claims to have seen "God" before he dies.

While trying to use Flash's Cosmic Treadmill to trace radiation left behind by the mysterious button Batman and Barry discover that Zoom was trying to reach "God" but upon reaching the unseen figure he boasted about being able to exist as a paradox, only to be vaporized completely - leaving behind only the button, which Manhattan picks up and recalls him dialogue with Laurie.

Later Manhattan puts Bruce Wayne in contact with the Flashpoint Thomas Wayne, who tells his son not to become Batman before his "death" and the destruction of the last of the Flashpoint timeline, this prompts Bruce not to respond to the Bat-Signal the following night.

Manhattan then proceeds to alter history again by saving Jor-El from the destruction of Krypton only to condition him into seeing only the worst in humanity, forming the villainous Mister Oz - who tries to convince his son, Superman, to abandon Earth - ironically Jor-El's humanity would ultimately prevail over this and he tries to warn Superman of Manhattan's threat only to be teleported away, despite Superman's attempts to save him.

Instead of breaking Superman's spirit it appears Manhattan's actions only strengthened his resolve to protect humanity and stop whatever plans the as-yet-unseen nemesis had in store.

As of the fairly recent events of Doomsday Clock the Watchmen universe is revealed to have entered a state of chaos following Manhattan's departure and the other Watchmen seek him out, which is set to have them enter the DC Multiverse themselves. It is revealed he took the Comedian from the Watchmen universe and placing him in the DC multiverse to save his life, showing the he is expanding his manipulations even further.

He altered history so Alan Scott never became Green Lantern and erased the Justice Society from existence. It is revealed that he saw a vision of Superman punching him and nothing afterwards, coming to the conclusion that Superman kills him or he destroys everything.

The heroes of DC eventually arrive on Mars to fight, but are unable to beat him.

Doctor Manhattan is considered one of the most powerful entities in the Watchmen universe and even in the DC multiverse itself he is treated as a being so powerful several characters have mistaken him for God itself - though in reality, despite his vast cosmic abilities, he is not a truly omnipotent being - though his array of powers and mastery over such power makes him incredibly formidable and he is theoretically capable of creating and destroying entire universes on a whim.

As of "Doomsday Clock #7" Manhattan has revealed that for unknown reasons he is unable to see beyond a certain point in DC's timeline, this is a very notable incident as it contradicts his usually omniscient nature - though it is possible that magic, tachyons or some other sufficiently powerful and exotic force is responsible for this apparent paradox.

It has also been revealed that despite many believing Manhattan created the DC multiverse during the events of "New 52" he in fact entered the DC multiverse at an unspecified point in prehistory - before modern superheroes but after the creation of said multiverse, this means Manhattan may still be vulnerable to the same cosmic laws and limits as other high-tier beings in DC multiverse rather than exempt from them.

Doctor Manhattan is characterized as a man who has become a living "god" but in the process has lost almost all the qualities we see as "human" - as such he sees the multiverse in a very matter-of-fact manner, though this is often mixed with darker cynicism, though he is by no means a cruel or malevolent being as he simply doesn't care.

Thus when Manhattan performs an act others see as "evil" or "immoral" he is not really doing so out of a desire to be malice, he simply does what he sees as necessary for a given situation and does not see emotion or ethics as things to concern himself with.

Having evolved so far beyond most other beings Manhattan has developed a sense of isolation and apathy, capable of almost unlimited feats yet in many ways unable (or unwilling) to understand some of the more basic things in life, such as compassion or compromise.

According to several characters in the New 52 and Rebirth, the as-of-yet unseen Manhattan has darkened and is even more cynical and sees the multiverse as cruel, corrupt and meaningless; something that Pandora (one of his apparent victims) claimed the heroes of DC would "prove him wrong" on. since Manhattan himself has yet to physically contact any actual heroes in the DC multiverse these remain mainly the words of others but there is compelling evidence that Manhattan is actively engaged in cosmic-scale reality-warping and manipulation, many of which seem designed to harm or displace DC heroes and their loved ones. 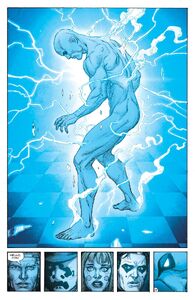 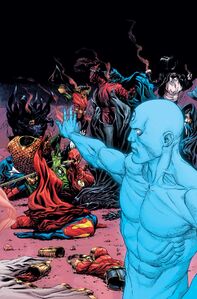 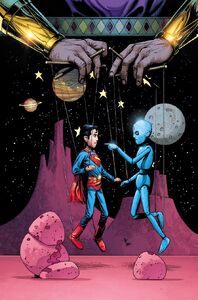 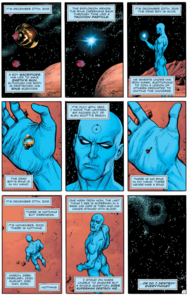 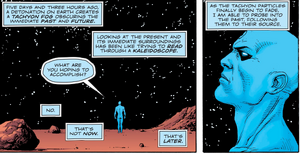 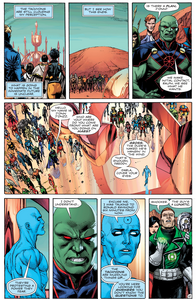 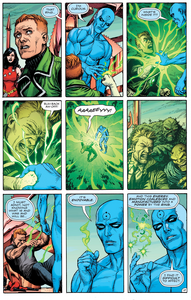 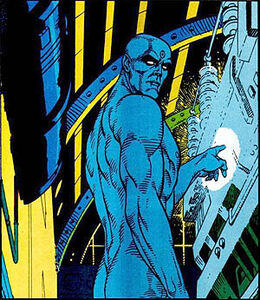 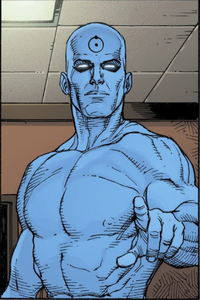 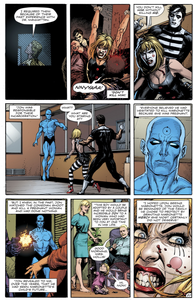 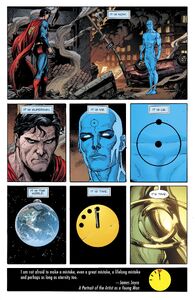 Retrieved from "https://villains.fandom.com/wiki/Doctor_Manhattan?oldid=3488727"
Community content is available under CC-BY-SA unless otherwise noted.