Doctor Octopus is the main antagonist of the superhero movie Spider-Man 2, being a scientist who becomes controlled by his malevolent mechanical arms and is from there turned into a dangerous supervillain. He is played by Alfred Molina.

Otto Octavius first appears alongside his wife Rosie as a scientist working on a means by which to provide cheap, renewable energy to the entire world via Fusion Power. Peter Parker visits the couple and befriends them, with Otto reminding Peter that intelligence is not a privleage but rather a gift to be used for the good of mankind.

On the day of the demonstration, Otto unveils his mechanical arms with which he will tap into the energy he is creating due to it being too dangerous for a human hand to enter.  To prevent the mechanical arm's artificial intelligence from taking control of his mind Otto also wears an inhibitor chip to protect his higher brain functions. At first, the demonstration goes well, but the experiment soon proves to be unstable, becoming akin to a miniature black hole. During the chaos that ensues, Otto's wife Rosie dies and Otto himself is electrocuted, which also destroys the inhibitor chip and fuses the mechanical arms to his spine. Taken to the hospital, Otto's mechanical arms reactivate and savagely murder all of the ER doctors and surgeons. Awakening, Otto panics upon realizing where he is and retreats to the ruins of an old warehouse on the edge of New York city. Consumed with grief at his wife's death and feeling responsible, Otto sinks into despair before realizing too late that the inhibitor chip has been destroyed. With it gone the mechanical arms swiftly corrupt Otto, convincing him that his experiment had been going successfully and that it is his "duty" to rebuild it, no matter the moral cost. So it is that Otto Octavius becomes Doctor Octopus.

Doctor Octopus first attempts to steal the money needed to rebuild his invention, and in doing so first comes into conflict with Spider-Man. Though he takes May Parker as a hostage he is ultimately driven off by Spider-Man, who rescues his aunt.  Afterwards Doctor Octopus visits Harry Osborn and demands that he give him more Tritium with which to complete his experiment. When Harry arrogantly refuses him, Otto threatens his life, at which point Harry makes him a deal: kill Spider-Man and he will receive his Tritium.

Seeking out Peter Parker on Harry's advice, Doctor Octopus kidnaps Mary Jane and tells Peter to find Spider-Man, lest he kill Mary Jane. As Spider-Man Peter confronts Doctor Octopus and after an intense battle uses up all of his remaining energy to stop a train crash after Doctor Octopus sends the train off-course. Capturing the fatigued Spider-Man, Doctor Octopus delivers him to Harry Osborn and then goes off to complete his experiment. After Spider-Man returns, the two battle once more, with Spider-Man being unmasked in the process. Apealling to Otto Octavius' inner goodness, Peter is able to convince Otto to abandon his doomed plan, at which point Otto reasserts control and returns to his original personality.  With his machine now raging out of control, Otto sacrifices himself to drown it in the river, noting as he does that he will not die a monster.

Doctor Octopus at the bank 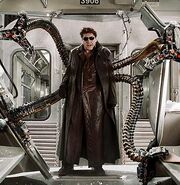 Doctor Octopus on the train

Doctor Octopus without his goggles

Doctor Octopus attempting to escape with stolen money
Add a photo to this gallery
Retrieved from "https://villains.fandom.com/wiki/Doctor_Octopus_(Spider-Man_Films)?oldid=568717"
Community content is available under CC-BY-SA unless otherwise noted.