Villains Wiki
Register
Don't have an account?
Sign In
Advertisement
in: Doctors and Scientists, Sadists, DC Villains,
and 34 more
English

NOTE: This article is about the incarnation of Princess Maru from the DC Extended Universe. The mainstream version can be found here: Doctor Poison (DC Comics).

She is an insane scientist working to develop a poison gas for General Ludendorff. However, their plans are compromised when the American spy under British Service, Steve Trevor manages to steal Doctor Poison's notebook filled with valuable information, taking the biggest advantage away from her and her allies. Despite her plans ultimately being thwarted by Wonder Woman, Maru manages to escape.

She was portrayed by Elena Anaya, who also played Aleera in the 2004 horror/action movie Van Helsing and Vera Cruz in the 2011 Spanish sci-fi/fantasy/psychological thriller The Skin I Live In.

Doctor Poison appears to wear black lab clothing that covers her entire body. It had buttons similar to that of a typical lab coat. She is often seen with a pair of large goggles at the top of her head. Her skin is caucasian and her hair is brown. Her most distinguishing feature(s) are the porcelain pieces that she wears on her face. She uses there to cover her scars.

Isabel Maru, or rather Doctor Poison, is an extremely malevolent, ruthless and genius individual. Obsessed with finishing her work on the gas weapon and testing it by killing people (which means that she is also a psychopath without remorse), Maru sought the right way to do it during WWI.

In fact, unlike General Ludendorff whom she serves as his own personal assistant and unlike Ares, who both of them unknowingly worked for and had bigger plans, Maru had much more human goal than Ares, who wanted to conquer Earth and destroy humanity, or Ludendorff, who wanted to win the war and rule the world.

For the German military, Maru is working on a deadly poison gas in a base in the Ottoman empire. While she is showing her newest progress to the German military leader General Ludendorff, one of Ludendorff's companions - American spy under British Service, Steve Trevor managed to steals Maru's notebook and successfully escapes from the base via plane. While Trevor flies off, Ludendorff and Maru enter a car. Although Trevor sweeps back over the camp and attempts to shoot their car, Ludendorff and Maru escape successfully.

After the fall of the base in Turkey, Maru is shifted to a different base in Belgium where she is to continue her work. However, Maru seems to have lost faith after her notebook has been stolen. When Ludendorff arrives to see whether Maru has made any progress, Poison reveals to him that the war is over; Germany has given up. Von Hindenburg has recommended that the German emperor signs the armistice and the fighting will be over soon. Ludendorff claims that the emperor will not sign the armistice if he sees Poison's newest weapon. Although Maru seems to have lost faith since her notebook was stolen, Ludendorff tells her that he believes in her, not her book. Maru then reveals to Ludendorff that she had fabricated an additional gas for Ludendorff himself, which will restore his strength. Ludendorff inhales the gas, which gives him enhanced strength and endurance. While he is recovering from the shock, Maru suddenly has an idea which might perfect her gas. She states that if it works like she expects it to be, the results will be terrifying.

Planning to Use the Gas

Together with Ludendorff, Maru heads to Germany where Ludendorff attempt to convince the German High Command not to sign the armistice. After he realizes that his attempts are futile, he signals Maru who tosses a grenade filled with her gas into the room.

While Ludendorff shuts the door, the German High Command succumbs to Maru's poison. Outside the room, Maru asks Ludendorff why he left the German leaders one gas mask as he knows that the mask will not save them. Ludendorff sadistically states that the Germans do not know that and will fight for what they believe to be safety. After the death of the High Command, Ludendorff and Maru plan to stage a presentation of the efficiency of Maru's gas for the German emperor as to convince him not to end the war.

At the gala Ludendorff is hosting, Steven infiltrates the castle and approaches Maru. He claims that he is a fan of her work and that she is the most talented chemist in the German army. He has a brief conversation with Maru who is dismissive at first. However, when Steve compliments her enough, he almost manages to convince her to show him what she is working on. Maru replies that she appreciates the interest he is showing but adds that she is loyal to Ludendorff.

Even after Ludendorff's death, Maru keeps the German soldiers going and personally oversees the German soldiers loading a huge bomb containing her gas into a cargo plane. In contrast to what Diana and Steve believed, the bomb is not intended for the front but for London. When Ares finally reveals himself, using his immense powers to wreaking havoc on the German base while fighting Diana, Maru tells her men to keep loading the plane. While Diana is fighting Ares, however, Steve Trevor and the rest of his team set out to destroy the plane. When Steve's men storm her laboratory, Maru flees the building and sacrifices her research which is blown up moments later by Steve's team.

After Steve has sacrificed himself to destroy Maru's plane mid-air, Diana unleashes her true powers and rips through the German soldiers. Ares encourages it and uses his powers to blast Maru's escape car and hurl Doctor Poison right in front of Diana, claiming that she is the perfect example of humanity and deserves no sympathy in any way. He urges Diana to kill Maru and Diana lifts up an entire tank to do so. However, the storm rips off Maru's face mask and reveals her destroyed face. Diana remembers what Steve told her moments before his death and decides to spare Maru's life. Agreeing that Maru and humanity are everything Ares says, Diana adds that, however, they are so much more. Upon being spared, Maru runs off while the gods resume their battle. It's completely unknown what happened to Maru after escaping from the base, but she most likely eventually passed away before 2017. 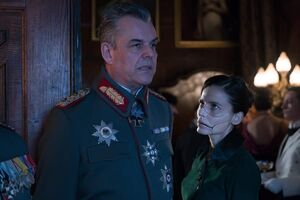