Doctor Robotnik is an evil dictator who was the main antagonist of Sonic Underground. He resembles the version of Robotnik that appeared in Sonic the Hedgehog (SatAM).

Robotnik was assisted in his villainous schemes by Sleet and Dingo. In the series finale, Robotnik is defeated when 3 robots controlled by Sonic, Manic, and Sonia crashed into Robotropolis causing an explosion with Sonic stating "Game over, Robuttnik!".

He was voiced by Garry Chalk, who also voiced Grounder in Adventures of Sonic the Hedgehog.

Doctor Robotnik also has many different design changes. First off, he has a longer and more colored mustache then in the normal games. He also has an all metal arms after an incident that happened to him in the Underground. He also wears a long belt going around his waist. He wears shorter more colorful boots and a red cape. He also wears big, heavy yellow shoulder pads to hold up the cape. Dr. Robotnik was modified specifically to look like he was a mechanic.

Robotnik was a consistent villain throughout the series, but didn't appear in many of the episodes. One of the major things he did was in the beginning where he tried to destroy Sonic, but it then backfired when Sonic foiled his plans. He only captured Sonic successfully one time, and Manic multiple times. One of the more famous episodes was where Sonia was faced with a choice to save either Manic or Sonic. He is also notable for roboticizing Sonic's Uncle Chuck, Sonia's adoptive mother Lady Windimere, and Manic's adoptive father Ferral. 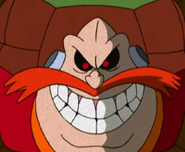