Villains Wiki
Register
Don't have an account?
Sign In
Advertisement
in: Male, Doctors and Scientists, Possessed/Brainwashed,
and 30 more

Professor Souichi Tomoe, also called Doctor Tomoe, was a villain in Sailor Moon S and the acting leader of the Death Busters. Most of the time his face is shadowed whenever he has his lab coat on.

Tomoe was a good scientist who was forced out of the scientific community for inappropriate experiments, selling some of these findings to purchase property that served as the basis for Infinity Academy where he continued his research. But a Tomoe was horrified when his wife Keiko and Hotaru were caught in a lab explosion caused by a bolt of lightning that contained the Daimon Eggs of Pharaoh 90. His wife already dead, Tomoe attempted to save Hotaru's life by converting her into a cyborg, selling his soul to Pharaoh 90 to give his daughter new life. Tomoe became a Daimon's vessel from here, attempting to create "Superior Beings" from hybridizing human and Daimons. He eventually assumed his monstrous form Germatoid before was put to rest by Sailor Moon's Rainbow Moon Heart Ache.

In the 1990s anime storyline, Tomoe was possessed by Germatoid, and searched for the Purity Chalice so he could awaken Pharaoh 90. To do this, he would need to find three treasures located inside the Pure Hearts of three people. He sent his assistant Kaorinite to find them, but she never did, and was killed by Sailor Uranus.

From here, Doctor Tomoe began creating more powerful Daimons inside a Heart Snatcher oven, and sent Eugeal of the Witches 5 to search for the three Pure Hearts. Soon she found them inside Sailor Neptune and Sailor Uranus, with Sailor Pluto's crystal ball being the third, and the Purity Chalice appeared. However, Sailor Moon got this, and Eugeal was killed by Mimet, the second of the Witches 5, who then took over for her to extract Pure Hearts to feed to Mistress 9, who was possessing Hotaru, whom Tomoe had chosen to be Mistress 9's host.

Soon, Mimet and the other witches were killed, but Kaorinite captured Rini and Mistress 9 took her Pure Heart to awaken in her true form. She sent Tomoe over to fight Sailor Uranus and Sailor Neptune, where Germatoid left him and was later killed by Sailor Uranus. From here, Tomoe was no longer evil. He survived the battle with Pharaoh 90, though he suffered temporary anmesia and injuries to his arm and leg, resulting in him being in a wheelchair, but was expected to make a full recovery.

In the Sailor Stars arc, Tomoe is seen briefly enjoying life in the countryside with baby Hotaru, until Sailor Pluto shows up to take over on Hotaru's care. He was never seen again after. 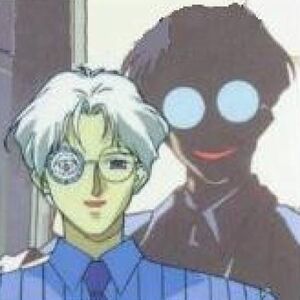