Member of the Hades Army

Sending out Cyber Knights to menace the Justirisers.

Attempting to kill the Justirisers.

Scientist, Monster Master
Doctor Zora is a major villain in the first quarter of Genseishin Justiriser. She is a member of the Hades Army who comes to Earth seeking to unseal Kaiser Hades.

Doctor Zora and her Cyber Knights came to Earth to uncover the place where Hades was sealed. Zora soon found Hades imprisoned under Kamishiro Mountain and set to work trying to destroy the Stellar Plates in order to free him.

Zora succeeded in destroying the 7 Stellar Plates, allowing her to break the eighth one and free Kaiser Hades. However, after Hades was injured by an attack from Glen, Zora decided to hold off the Justirisers while Hades retreated. Hades' battleship fired a laser at Zora to enlarge her into a space beast. However, the Justirisers form NinRiser and destroy her.

Zora with her white cloak on 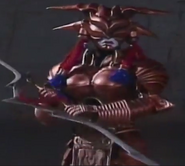 Zora in her fighting form.

Zora's Ship
Add a photo to this gallery
Retrieved from "https://villains.fandom.com/wiki/Doctor_Zora?oldid=3535624"
Community content is available under CC-BY-SA unless otherwise noted.