Dodoria is one of Frieza's henchmen, and his second strongest commander. He is pink, spiked, fat, and ugly with his appearance matching his personality. He served as a supporting antagonist in the Namek Saga and as the secondary antagonist of the 1990 TV special Dragonball Z : Bardock The Father of Goku.

He was voiced by Yukitoshi Hori in DBZ, and Takashi Nagasako in DBZ Kai in Japanese and Paul Dobson in Ocean Group dub, Chris Forbis in DBZ, Mike McFarland in Raging Blast, and John Swasey in DBZ Kai in Funimation dub, and Ed Marcus in AB Groupe dub in English.

Dodoria and Zarbon accompanied Frieza to Planet Namek during Freeza's quest to find the seven Dragon Balls and wish for immortality. Unlike Zarbon's, his newer scouter did not break at Vegeta's power level. On the fifth Namek village Frieza invaded, three Namekian warriors disposed of most of Frieza's henchmen, so Dodoria stepped up to fight them. Before he could, the village elder Moori, destroyed Dodoria's scouter along with any other scouters, so that Frieza could not find the Dragon Balls. Dodoria angrily went after Moori to rip him to pieces in revenge, but Frieza ordered him to kill the young three Nameks first. After easily defeating them, Dodoria killed one of the Namek boys Cargo with a breath blast over Moori's shoulder (anime only).

After beating Moori to near death before snapping his neck, Dodoria tried to kill Dende, the other Namek boy, but Son Gohan and Kuririn attacked him and escaped with Dende. Dodoria chased after them, but was eventually stalled when Kuririn used Taiyoken to temporarily blind him. Dodoria blasted the area once regaining his eyesight, and, thinking he had killed them (when in reality they avoided the blast), Dodoria attempted to get back to Frieza.

However, he was attacked by Vegeta. They fought, and soon it was clear Vegeta had the advantage, so Dodoria bargained for his release by telling Vegeta a secret about his home planet, Planet Vegeta: that it was destroyed by Frieza and not a meteor. Vegeta did not keep his end of the bargain, and as Dodoria tried to escape, Vegeta destroyed him with an energy wave.

Dodoria was seen in several flashbacks on Planet Vegeta during the Frieza Saga.

The reason Dodoria stands out despite his few appearences is his sadism. Unlike Zarbon, Dodoria, despite showing some limits to his cruelty, is almost as evil as Frieza himself. He clearly shows little regard for those he killed, and gets easily flustered when someone overpowers him. Therefore, this proves that Dodoria is nothing more than a bully who preys on the weak while being fearful of the few in the universe that are stronger than him. As Vegeta said, he is also a coward who revels in making those weaker than him suffer, but will plead whenever  someone does the same to him.

Dodoria is a bloodthirsty brute and a psychopathic bully. Out of all of the soldiers in the Galactic Frieza Army, he is arguably the most twisted outside of the Frieza Clan themselves. He is a sadistic barbarian who is very proud of his strength and position as Frieza's enforcer and one of his two attendants and highest ranking soldiers outside of the super elite squads of the Ginyu Forces and the brothers Abo and Kado. He enjoys using his strength to bully those weaker than him. He loves carnage and destruction, taking joy in murdering Bardock's crew. He has no qualms with murdering children or the elderly and appears to enjoy his work. Like Zarbon, he looks down on Saiyans, including Vegeta. Despite his power, he is quite cowardly toward those stronger than him, as he fears Frieza's wrath and begs Vegeta to spare him. He is also reckless and irrational, having a tendency to not make sure he has finished his foes and being prone to blind rage. In short, he comes off as a sadistic, cowardly, dimwitted brute.

Various videogames attempt to give him more personality traits; the Raging Blast series shows that he would like to join the Ginyu Force to look cool, and the Xenoverse series shows him to be a surprisingly caring commander toward his troops (which is in contrast with the series canon since he demonstrated no sadness upon his crew being killed by Bardock and didn't seem to care when soldiers were killed by Namekians).

Dodoria in Dragon Ball Heroes has a fight with Beat and is seen over powering the young boy with blows to his face and stomach. By the end of the fight, Dodoria defeats Beat.

In TeamFourStar's Dragon Ball Z Abridged series, Dodoria remains one of Frieza's commanders, alongside Zarbon, however, the main difference between this version and the original is that this version states outright that she is actually a woman. Dodoria is shown along side Frieza and Zarbon throughout the first few episodes of the Namek saga, notably murdering most of the Namekian soldiers and listening to the cries of a "space duck", which was actually just a scared Krillin trying to make sure Freeza and his men didn't think that he and Gohan were watching him. After they saved Dedene, Dodoria chased after the two, only to be blinded by Krillin's solar fare, idiotically try to blast everything in sight and be ambushed by Vegeta. Dodoria tried to bargain with Vegeta by telling him what really happened to his planet, only to be blown off when Vegeta reveals that Frieza had already posted the information on Twitter all those years ago. Vegeta comments on how Dodoria is begging for his life like a woman, leading to Dodoria revealing that she is a woman, much to Vegeta's shock and horror. Dodoria explains her people's origins, along with her own, (off screen) revealing that she is the prettiest and only member of her race, because Frieza blew up her home planet for seemingly no reason. She is then killed by Vegeta, wanting to repress his memories of this experience.

In Season 2's Kai episode, Zarbon was notable for saying the line "I have a thick, meaty, vagina", right before being killed by Vegeta. 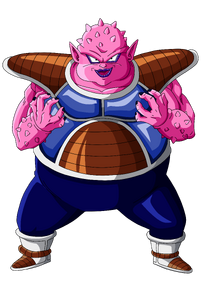 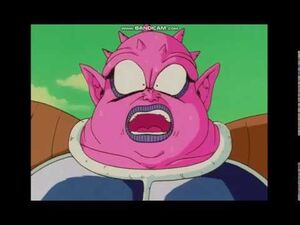 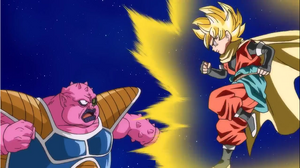 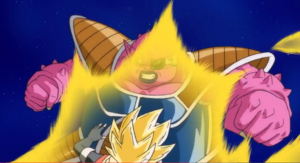 Dodoria kneeing the boy in the stomach. 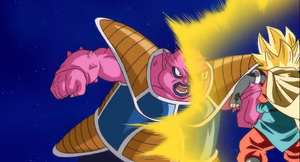 Dodoria punching Beat in the stomach. 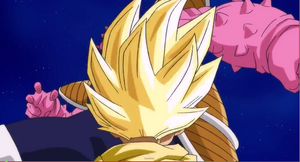 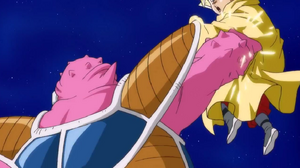 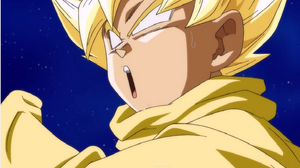 Beat in pain after being punched . 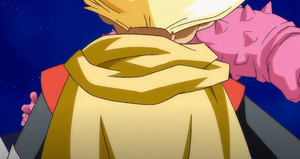