Dogati is the main antagonist of the 1985 action-adventure film King Solomon's Mines. He is a ruthless Turkish slave trader and adventurer, Allan Quartermain's archenemy, as well as one of the leaders of a German military expedition who determines to find the titular mines at all cost, alongside Bockner.

He was portrayed by John Rhys-Davies.

Dogati can be best described as ruthless and greedy. A slave trader who cares about nothing but money and his rivalry with Quartermain, Dogati will try to get King Solomon's Mines for himself and kill Quartermain at all cost. His ruthlessness is displayed when he kidnaps Professor Huston by murdering one of the his partners, subjects him to brutal torture and threatens to do the same to Jesse. On the other hand, Dogati is very intelligent as he has preemptive measures for all possible situations, allowing him to survive after Bockner shoots him.

When coming to the mines, Dogati and his men slaughter the inhabitants of a small Kukuana village to pave way for himself. Dogati even willingly backstabs Bockner and the latter's men as well as his own just to cross safely into the moat of quicksand, an act that causes Bockner to turn on him, showing just how obsessed with the treasure he really is. He later forces Bockner to swallow some diamonds just so he can cut him open to retrieve them later on. When the mountains is crumbling, all he cares about is killing Quartermain, proving for the final time that Dogati is nothing more than a psychopathic monster.

Dogati is a ruthless Turkish slave trader and Allan Quartermain's long-standing archenemy. Together with Bockner, he leads a German military expedition to find the fabled King Solomon's Mines. To this end, they capture Jesse Huston's father, Professor Huston, who is also on an expedition to find them. Since Huston leaves his map behind upon being captured, the expedition force him to draw another one. After several occasions of the two rival expeditions clashing with each other, Quartermain's group manage to rescue Huston, who confirms the existence of the mines and begs Quartermain to stop Bockner and Dogati from finding them.

Just as the Kukuana tribesmen submit to Umbopo, Dogati and Bockner attack their village, and amid the ensuing chaos the evil priestess Gagoola kidnaps Jesse and brings her into caves in the depths of the Breasts of Sheba. While Quartermain and Umbopo chase after them, they're pursued by Dogati and Bockner, who follow them to the entrance of the mines only to be hampered by a moat of quicksand. When Bockner's men are having trouble going forward into the quicksand, Dogati shoots down all of them and most of his own men, and uses their corpses as stepping stones to cross into the moat safely. After they passed into the entrance, Bockner betrays and shoots Dogati before taking over the remaining party to take the treasure for himself.

However, Dogati is later revealed to be still alive thanks to his protective vest. When Bockner is laying claim to the treasure, Dogati confronts him and forces him to swallow some diamonds so he can cut him open to retrieve them later on. Before he can do anything however, a series of eruption throughout the mines caused by Gagoola's suicide causes the treasure chamber's ceiling to collapse, partially burying him but leaving Bockner unharmed. Before leaving, Bockner fires his gun at the ruined ceiling, burying Dogati alive. Yet, even this doesn't kill Dogati, as he is once again revealed to be alive and well. While Quartermain is escaping with Jesse and Umbopo, Dogati confronts and strikes him down. A fight between the two ensues, but Quartermain gains the upper hand at the last minute, sending Dogati falling into the chambers' lava pit and finally killing the slave trader once and for all. 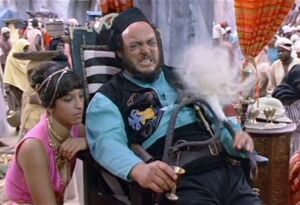 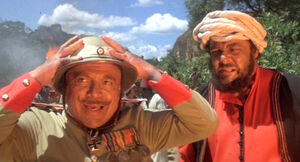 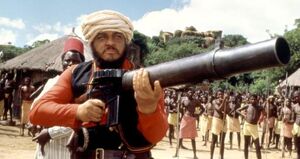 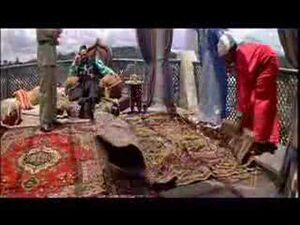