Dogbert is the deuteragonist in the Dilbert comic strips by Scott Adams as well as their TV adaptation.

He is a extremely intellegent dog with a megalomaniacal desire to rule the world and enslave the human race. He has scamed several companies and made billions of dollars. He also often bullies his owner Dilbert, such as stealing a device Dilbert made to create unlimited energy. However, he does often help him at times. For example, he saved him from being executed by the evil director of human resources, Catbert and often gives him advice.

He has successfully conquered the world several times; however each time he retires and allows the world to return to its former system, consistently believing the human race unfit to be led by him.

In an episode of the television adaption, he tricks Dilbert into saying 2001, as in 2001: Space Odessy when he was taking a shower that had a voice-contoled thermostat, thus tricking Dilbert into changing the temperature. He often uses people's stupidity against them, such as the Pointy-Haired Boss, and can don on several disguises to trick people.

Some people have believed that he was a beagle, but Adams himself said that he was never one, only that he is based off of that particular species. 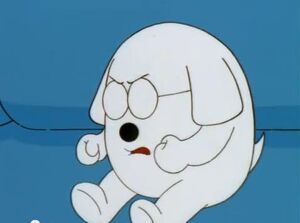 Dogbert in the TV Series 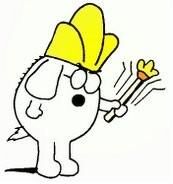 Dogbert dressed up as his religious alter-ego, "Saint Dogbert". 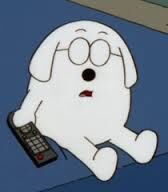 Dogbert with a TV Remote.
Community content is available under CC-BY-SA unless otherwise noted.