Doggymon is a minor villain in Digimon Frontier.

After Calumon escaped the Digimon Devas, he encountered a Doggymon that attacked him.

During the battle with DarknessBagramon in the Human World, a Doggymon is among the many Digimon Taiki summons from the Digital World to form Shoutmon X7 Superior Mode.

Doggymon is a Champion Level Digimon that looks like a cartoon dog. They often stand on their two hind legs and they have a D on its chest. 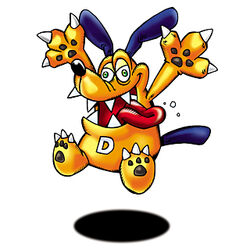 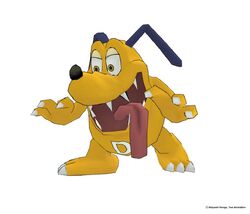 Doggymon.
Add a photo to this gallery

Retrieved from "https://villains.fandom.com/wiki/Doggymon?oldid=3005320"
Community content is available under CC-BY-SA unless otherwise noted.