Kidnap as many dogs as possible (failed)

The Dognapper is the main villain of the Arthur episode "Buster the Myth Maker." He is a criminal who has kidnapped several dogs from Turkey Hill Park in Elwood City for an unknown reason.

The Dognapper first appears in the episode when Arthur Read and Buster Baxter see him setting a trap atop a tree while riding their bikes away from Turkey Hill Park (where they had been investigating the rumor that there were escaped tigers there). Arthur, Buster, and the Dognapper all scream at seeing each other, causing the latter to fall of the tree, and Arthur and Buster ride to Arthur's House, where Buster voices his belief that the Dognapper must have been a tiger hunter, but Arthur believes there is another explanation. Then the telephone rings; Arthur answers it and a mysterious person calling himself "Mr. Deep Float" tells the two kids to meet him at the Ice Cream Shop. There, they meet Mr. Deep Float, who is a kid disguising himself with a fedora, a ski mask and a long coat, and he tells them that the tigers at the park are just the tip of the iceberg, as there are many other climatically inappropriate vertebrates there. Then, Mrs. Powers comes to offer Mr. Deep Float ice cream and refers to him as "Alan," revealing him to actually be Brain in disguise. After chiding his mother for blowing his cover, Buster asks him if he knows something about the tigers, but he responds that he made it all up because he wanted to create a false story that people would buy into and posted it to a website called "Ultra Wacky Animal Stories" (which is where Arthur and Buster found the tiger rumor in the first place). Buster then compliments Brain for going as far as hiring an actor to play a tiger hunter to make his lie seem true, but Brain has no idea what he's talking about. Arthur begins to explain to Brain about the man they saw in the park, but he, Buster, and Brain then exchange looks when they realize that Brain didn't hire the man. A headline in the Elwood City Times then shows that the Dognapper has been sent to jail. The Dognapper is then shown being loaded into a police car by officers, as a reporter explains that he is a serial dognapper who had stolen dozens of Elwood City dogs over the past year, and Ranger Clarice tells anyone who has lost a dog in the park the past year to come pick theirs up after they were recovered from the Dognapper.

The Dognapper is a gray-furred anthropomorphic dog who wears a camo outfit.

Not much is known about the Dognapper's personality because both of his appearances in "Buster the Myth Maker" are very brief, but he is obviously cruel towards (non-anthropomorphic) dogs, as he has kidnapped many of them from their owners for an unknown reason for the past year. 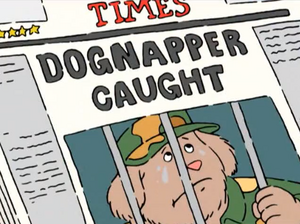 A headline in the Elwood City Times about the Dognapper's arrest. 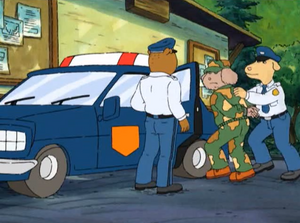 The Dognapper is taken away by the police.