Settle his rivalry with Kyoryu Gold.

Raging Knight Dogold is an oni-themed general in the Deboth Army and a major antagonist in Zyuden Sentai Kyoryuger. He tends to say "How irritating!" when vexed.

While aiding Chaos in the Sengoku period, Dogold was seemingly destroyed by Utsusemimaru's sacrifice, but actually reformed his body around the Kyoryuger as part of Chaos' plan to control the Zyudenryu Pteragordon. When he formed around Utsusemimaru, Dogold became dormant, and Utsusemimaru's anger was allowed to be dominant. However, this resulted in an amnesiac Dogold with no memories of the Sengoku period. The last of Chaos's followers to be revived, Chaos asked him his name upon thawing him. The raging "Dogold" fumes when Chaos apparently forgot his name.

The amnesic Utsusemimaru continued to use the name of Dogold when formally introducing himself to the Kyoryugers during his scheme to have Debo Royaroya captured martial artists to incite rage from them. Later, though it was a distraction for Chaos to obtain Zyudenryu Pteragordon, Dogold employs Debo Yakigonte in a scheme to not only gather rage, but to also break up the Kyoryugers. Though the plan failed, Dogold is given a fake evil Pteragodon Zyudenchi. Eventually, the truth of Utsusemimaru's fate is revealed as the real Dogold reveals himself and regains control of Utsusemimaru's body. Luckily, the Kyoryugers manage to free their ally from Dogold's possession by using a Pteragordon Zyudenchi infused with Torin and Ramirez's spirits.

Though his body shattered into a thousand pieces by the attack, Dogold reforms, revealing that so long as the "mask" of Dogold's armor-based body is intact, he shall survive. For a good time afterword, Dogold reluctantly uses the Cambrima as tentative vessels on a monthly basis, gaining a fur collar around his neck when he first took over a Cambrima. After almost gaining a new vessel in the robot G-BO, Dogold posesses fellow Debo Knight Endolf, whom had been cruel towards him and manipulative with his comrades.

Finding the results beneficial to his level of power, Dogold decides to keep his action a secret for the moment. However, when he employs the Debo Yanasanta brothers near Christmas, Dogold learns that Endolf's personality had begun merging with his own; Dogold had been complaining of headaches as Endolf had, and not-so sincerely apologize, as the Resentment Knight was prone to do. Confirming Dantetsu Kiryuu's strength during their second encounter, Dogold decides that taking Daigo's father as a new host would be not only the only way to maintain his sense of self, but would also boost his level of strength.

However, betrayed by Debo Yanasanta (who was revealed to actually be one of Endolf's monsters all along) to take the full blast of the Ten Zyuden Maximum Victory Finish, Dogold's body became weak enough for Endolf to break Dogold's hold. The freed villain reveals that he manipulated Dogold's plan from the beginning, and almost kills Dogold, though Candelilla and Aigaron step in at the last second. Upon returning to the frozen castle, it is revealed that, with his anger quota now full, Dogold has lost his standing with Chaos. He resumes using Cambrima as hosts.

Endolf soon begins uses a Deboss-cell based device to control Dogold, putting similar devices on Dogold's horns to cause pain, should Dogold be disobedient. When these are revealed, Utsusemimaru question's Dogold's pride as a warrior. This seemingly shatters Dogold's resolve and makes him fully obedient to Endolf, whom he begins calling "Master Endolf".

Dogold is present during the final battle. When the Kyoryugers break away to face Deboss, Dogold and Endolf chase after them. Utsusemimaru breaks from the group to hold the two generals back. Dogold convinces Endolf to hold the warrior still so Dogold can get a clean kill. However, after Endolf complies, Dogold attacks Endolf instead, releasing Utsusemimaru and destroying the control device, releasing Dogold from Endolf's control. It is revealed that when Utsusemimaru questioned Dogold's pride, he began planning a rebellion against Endolf by earning his trust.

Asking Utsusemimaru's help to defeat Endolf, the two attack the Resentful Knight. Endolf counter-attacks Dogold, mortally wounding the Raging Knight. However, Dogold merges with Utsusemimaru at the last second, though this time allowing the samurai to remain in control of his body, and the two use their combined power to destroy Endolf with a dual Lightning Afterglow attack. Dogold breaks away from Utsusemimaru and merges with the Cambrima again, and is ecstatic to be free of the nuisance that was Endolf. However, wanting to finish his centuries-long battle with the Kyoryuger, and die a warrior's death, he demands Utsusemimaru take up his stance, and reveals that the mask of his armor is permanently damaged.

The two take up their stances, and clash one final time. Utsusemimaru gives a fatal blow, with the two collapsing onto each other in pain. Dogold thanks Utsusemimaru for honoring his request to die in battle with him. Utsusemimaru replies that such words from a villain are "irritating", parroting his rival's catchphrase. Dogold dies laughing at this, and disappates into light.

In the year 2114 Remorseful Knight Arslevan takes Dogold's body, and puts a new soul into it, reincarnating him into Submission Knight Sneldo.

Dogold has the ability to discharge lightning from his body, to which he can channel to his Kenka Jōtō, a seven-branched sword for brutal strikes.

When Dogold was using Endolf as a host, he had the ability to use Endolf's Rosocrusher (the candlestick-based pistol/sword) for attacks in unison with his normal sword. 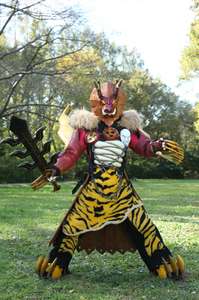 Dogold with the shock restraints.