Pawn of the Xiliens (Godzilla Island)

Kill Godzilla and the other kaiju (both failed).

Dogora (in Japanese: ドゴラ) is a super organismic mutant space cell and the titular main antagonist of the 1964 Japanese film of the same name, and a minor antagonist in Godzilla Island and Godzilla: Planet of the Monsters.

Dogora first appeared in space as multiple cells feeding off radiation emitting from the Earth. A television satellite studying the cells accidentally crashes into one of them, causing it to mutate further. The cells came closer to Earth and began attacking factories and vaults whilst vacuuming coal and diamonds, making scientists discover that it is feeding on carbon.

Now in its jellyfish-like adult form, Dogora shows up above Fukuoka with the objective of consuming more carbon. The JSDF attack the creature with every weapon they got, but none of their attacks work since Dogora is able to quickly recover from every wound in its flesh. Before departing with all the carbon it needs, it grabs the Wakato Bridge and hurls it at the city, creating a large tidal wave. From the damage it received from the JSDF, Dogora splits into copies of itself via mitosis.

While figuring a way to defeat the Dogoras, the humans remember that earlier, a swarm of bees flew over the space squid, causing numerous rocks to fall from the sky. They realize that bee venom is Dogora's weakness, causing its cells to crystallize when stung. When the Dogoras returned, the JSDF use huge sprays carrying wasp and bee venom to harden and defeat the aliens, shattering them to pieces.

Dogora made its Godzilla debut in an episode of Godzilla Island, where it is a pawn of the Xiliens. It was summoned by Zaguresu to possess Godzilla using SpaceGodzilla's ghost. As the possessed Godzilla attacked the other monsters, Dogora casts an illusion over the forest to keep Torema lost and prevent her from awakening King Caesar. She shot Dogora with her laser pistol to escape its illusion, but the alien quickly reformed. As King Caesar walked towards Godzilla with an okuda to perform an exorcism, Dogora attempted to stop him by causing a mountain to explode and bury him under a landslide. However, Godzilla Jr. managed to dig out King Caesar from the landslide, allowing him to successfully exorcise SpaceGodzilla from Godzilla. Dogora then retreated to space, never to return.

Dogora is briefly seen in the prologue of the film as one of the monsters that invaded the world. According to the prequel novelization Godzilla: Monster Apocalypse, Dogora was the second monster that made contact with humanity after Kamacuras, first appearing in its cell form from a Russian space station. It reached landfall in September 2002 where it attacked London and destroyed many of its famous landmarks, including the Palace of Westminster and the Tower of London. After absorbing thermal energy from the British military, Dogora moved on to Manchester, where it was taken down by chemical plants releasing a substance that included spider and wasp venom. The estimated number of casualties resulting from Dogora's attack was around 3.9 million.

In the manga adaptation, Dogora and the other kaiju were instead killed off by Godzilla Earth.

Being utterly unlike any other earthly life form, Dogora can survive in the vacuum of space. Its amoeba-like nature allows it to survive conventional weapons, which pass through it largely without effect. It can levitate objects at a distance, which it does whenever it descends to the surface to feed on substances containing carbon. This power is great enough to allow it to pull large structures from their foundations. 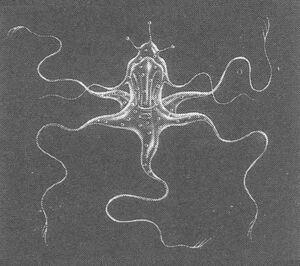 Dogora in the form of a cell. 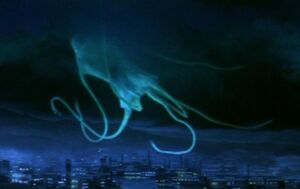 Dogora in its adult form.

Dogora exploding after it is exposed to wasp venom. 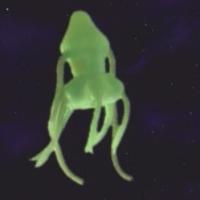 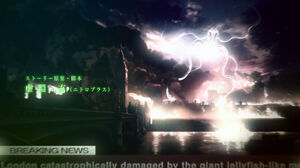 Dogora in the opening of Godzilla: Planet of the Monsters.