Control the Beyblade world and prevent Gingka and his friends from interfering (failed).

Doji is one of the main antagonists of the anime and manga series Beyblade: Metal Fusion. He was an enemy of Gingka and the former leader of Dark Nebula who had Ryuga. He used to own Dark Wolf DF145FS. Doji seeked the power of the "Forbidden Bey", Lightning L-Drago 100HF. As revealed in Beyblade: Metal Fury, he was one of the bladers who worshiped the evil god of destruction and planned to bring him back all along.

Years ago, Doji organized an attack against Koma Village with his organization Dark Nebula, planning to steal the forbidden bey Lightning L-Drago. When his minion Ryuga took the bey, Gingka's father Ryu tried to stop him, which resulted in Ryuga using the bey to apparently kill Ryu. However, Ryuga was weakened as using L-Drago required much of his energy, so Doji put him in a regeneration chamber for several years. Meanwhile, he tried to destroy Gingka, whose bey posed a thread to his plans as it was the exact opposite of Ryuga's, by manipulating Kioya, which later backfired when Gingka and Kioya became friends. When Ryuga was revived, they manipulated Gingka into giving L-Drago the last bit of energy it needed by provoking him during his battle with Ryuga as -Drago fed on negative emotions.

Afterwards, Doji hired various enemies of Gingka to join the Dark Nebula and finally organized Battle Blader, a tournament whose winner should be known as the world's greatest blader. Unknown to everyone else, Doji and Ryuga were actually using tournament to have Gingka get stronger so L-Drago could steal even more energy from him. However, Doji underestimated the powers of the bey and Ryuga's ambitions when ryuga declared that he didn't need Doji anymore and had L-Drago steal his life energy. Although it wasn't shown, Doji was apparently revived as all the others at the end after L-Drago's defeat as he returned in Beyblade: Metal Fury.

Despite Doji didn't appear himself (except for a few flashbacks), the second season had two villains who strongly resembled Doji: the Russian team leader Anton, who only appeared in one episode before being fired from the team because of cheating, and the American team leader, businessman and scientist Dr. Ziggurat, who was the final main antagonist of the season along with his agent Faust, who was actually the brain-washed Toby, a friend of Gingka's new teammate Masamune. Although there was no flashback or image showing them together, it was revealed that Ziggurat was also the mastermind behind Doji's actions in Beyblade: Metal Fusion, planning to use L-Drago for his experiments, which finally resulted in an alternate energy source he dubbed Spiral Force, powered by the bey Twisted Tempo, which was based on both L-Drago and Pegasus and wielded by Faust.

Doji returned in the third season, Beyblade: Metal Fury, as one of the agents of Pluto, the priest of a group of bladers who worshiped the god of destruction, Nemesis. It was later revealed by Doji that both him and Ziggurat were members of the cult all along and both their search for L-Drago and Dr. Ziggurat's Spiral Force were part of the cult's plan to revive their god to destroy the world and recreate it in their image. When the legendary bladers fought Nemesis, who was still in his prototype form, Doji manipulated Ryuga by provoking him as all bladers had to work together to lock Nemesis away with Zeus' Barrier. After this resulted in Ryuga attacking Nemesis alone and the dark bey being revived, Doji, Pluto, and Rago, the blader who wielded Nemesis, fled the temple they were in and went to the lost city of King Hades as this was the place where they wanted to build their new kingdom after releasing Nemesis' full power and destroying the world. However Ryuga had followed them to fight Nemesis alone once more, seeking the bey's power for himself. During the battle, Doji taunted Ryuga about being weaker than Nemesis until Ryuga, enraged by this, released a new Special Move to attack Nemesis. Despite it couldn't destroy Nemesis nor L-Drago, the impact resulting of the forbidden beys clashing was enough to send Doji fall down into the abyss, who was laughing maniacally, claiming it to be the best feeling in the world.

Doji finally returned in the Shogun Steel anime in A New War, but this time, he was apparently revived by Merci. He was converted to life energy stored within the Hades computer system. His new form poses as a threat to the WBBA and the future of beyblading.

Doji is a person who never really gets serious even if his enemies were strong such as Gingka. He is also a person who doesn't like to show his real power, especially not to children. Doji is extremely cruel, often punishing members of the Dark Nebula by "feeding" their power to Lightning L-Drago 100HF. He is never one to give up on his goals and desires, as he uses his intellect to get ahead of his enemies. He always speaks in a polite manner, even to his enemies, but there's no mistaking the arrogance in what he says. He'll frequented access people as 'my friend' in a condescending manner. Generally, he appears to never accept people as being on his level.

As shown in Metal Fury, Doji has a habit of taunting those who oppose him. In episode 141, he even goes so far to anger Ryuga by making note of him helping Gingka, as well as degrading him to a mere pawn in Hades Inc's plan. It's a form of manipulation, as he clears knows this will cause Ryuga to immediately stop any cooperation with the other Legendary Bladers. Doji appears to take great enjoying of taunting Ryuga, as he laughs hysterically at the Dragon Emperor's reaction (which also reveals him to be more psychotic than before). He has even done this to Gingka back in Metal Fusion when he "awakened" Lightning L-Drago.

Socially, Doji keeps his distance (Yu was the only one who had the potential to form a friendship with him.) He only associates with those who can be of use to him. Powerful bladers like Ryuga deserve the upmost of respect, in his mind. Although Doji doesn't get close to others, he has the ability to "play others emotions like a piano". This shown in episode 3 of Metal Fusion when he agitates Kyoya to the point where he bets on his free will. He also does this in Metal Fury to Ryuga in order to mess up Zeus's Barrier.

In private, he has a conflicted relation with his own interests. He claims to 'hate cacti so much that he can't think about anything else'. The true reason for this, as Doji further describes, is that they are so prickly that he can't hug them. This sort of utter obsession with things he can't have seems to be a large part of his character motivation. In the anime version of Shogun Steel, he is especially driven by this - given he is physically dead, he can't have any form of physical sensation which he now misses terribly. 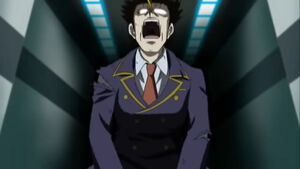 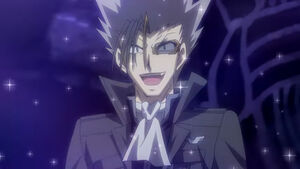 Doji as he appears in Beyblade: Metal Fury. 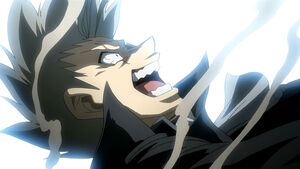 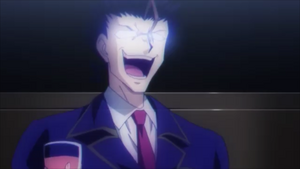 Doji's holographic appearance as an A.I. in Beyblade: Shogun Steel.
Add a photo to this gallery
Retrieved from "https://villains.fandom.com/wiki/Doji?oldid=3422765"
Community content is available under CC-BY-SA unless otherwise noted.