Galactic Scientist Doldora is a scientist and weapon designer serving as one of the Galactic Imperial Army Zone's three Galactic Commanders and a major antagonist in Chikyuu Sentai Fiveman. She is also the one who hatched Zaza and modified her into being her cyborg bodyguard.

She was portrayed by Hatsue Nishi.

Doldora was one of the earliest recruits of Zone. She took part in Zone's conquest of the planet Romano, where she single-handedly defeated their Knight Corps. She would go on to assist in many more of Zone's invasions, including their attack on the planet Sidon where they first encountered the Hoshikawa siblings, and later, their invasion of Earth. She often worked alongside her assistant Zaza in evil schemes.

On one occasion, Doldora disguised herself as a human woman in order to make Fumiya fall in love with her as part of a plot to destroy the Fivemen from the inside. She said her name was "Midori" to invoke feelings of Fumiya's mother and used Fumiya's love for her to get him to lower his guard, enabling Kumorugin to brainwash Fumiya with one of its spawn. Doldora then attempted to have the brainwashed Fumiya kill the Fivemen in their sleep, but the Hoshikawa siblings soon noticed something was awry with their brother. They were later able to remove the parasite from Fumiya's head and kill it, freeing Fumiya from its influence. The Fivemen then went to confront Doldora and destroyed Kumorugin.

One scheme by Doldora involved using the Galactic Warrior Tanukitsunegin to create an illusion of the Fivemen's mother in order to lure them into a trap. The illusion of the Hoshikawa mother succeeded in attracting Remi, though Gaku remained suspicious of it and believed it to be a Zone trap, as she did not appear to have aged since he last saw her. Eventually, Doldora's deception was uncovered and her device for projection the illusion was destroyed, though the Fivemen were able to find footage that confirmed their mother was alive.

When Galactic Empress Meadow is revealed to be an illusion created by Vulgyre, Doldora is the one who is impacted the most, having a breakdown over the deception she had endured for all her time under Zone, believing that she was working for Meadow and not Vulgyre. Vulgyre then uses this opportunity to use his energy to combine Doldora with Zaza and mutate her into the Galactic Warrior Baradorugin. Vulgyre then sends her to corrode the flowers of Sidon, which had prevented him from simply destroying Earth.

Baradorugin corrodes and destroys nearly all the Sidon Flowers at Newtown Elementary save one, which was protected by the boy who brought the flower to the school while Fiveman protects it. Seeing its mission as becoming more difficult, Gorlin #37 is sent out which four of the five Fiveman end up fighting once Baradorugin is absorbed within as FiveRed is forced into a final showdown with Billion. Using their force and the Hang Beam of Star Five, the Combined Galactic Warrior is destroyed, with it the final remains of Doldora. 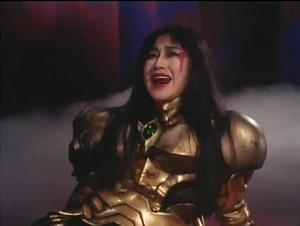 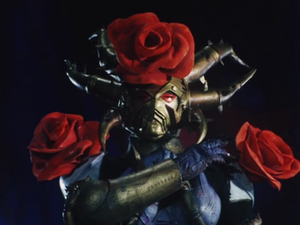 Baradorugin.
Add a photo to this gallery

Retrieved from "https://villains.fandom.com/wiki/Doldora?oldid=4352967"
Community content is available under CC-BY-SA unless otherwise noted.