Take absolute control over all of the Great Waterland.

Kill Alfred and take over the world.

Dolf is the main antagonist from the Dutch-Japanese cartoon series Alfred J. Kwak.

He was voiced by Shigeru Chiba in Japanese.

Dolf is Alfred's archenemy and first appears in Episode 4. In the first episode, Dolf's parents, a crow and a blackbird, can be seen making disparaging and vituperative comments on the eggs of Alfred's mother. Both are dressed in traditional German garment. The father wears Lederhosen, a feathered hat and, in the Dutch original, speaks with a heavy German accent, while Dolf's mother is seen in a dirndl outfit. In Episode 10, he helps Alfred to accidentally release The Evil Spirit of Darkness.

Dolf gradually develops from a merely naughty and mischievous schoolboy, to a merciless and cruel dictator, an arms dealer, a reckless politician, and overall criminal. Though the show clearly portrays Dolf's acts as inherently negative and wrong, it also provides the background on how Dolf became who he is. For example, when a child, Dolf is prone to blame others for problems in which he too played a role. Dolf mentions that his mother died very early and that his father neglects him due to alcoholism. Dolf can also be seen to express a sense of self hate and poor self image, as he is disgusted by the fact that he is only part crow, and paints his orange beak black to disguise his true identity. When Alfred accidentally finds out about this, he cannot understand why Dolf is so ashamed and urges him to drop the secret and tell others about it. Dolf however is petrified and convinced that his friends will make fun of him, and makes Alfred swear he will never tell anyone about it.

Episode 22 through 25 are essentially an allegory of the rise and fall of Fascism/Nazism, with Dolf himself, though wearing a Napoleonic uniform, as a clear caricature of Adolf Hitler. It begins with Dolf returning from abroad, in a train with Austrian markings, and meeting up with his friends. He then discusses the current political climate in an oppressed country known as the Great Waterland, and expresses disgust of it. Dolf then decides to found a political party, the later National Crows Party, for which he goes to Alfred to lend money. He explains his ideas, but Alfred refuses and Dolf barges out of Alfred's house in a fit of rage. Alfred and Henk express their fear of Dolf, but Henk reassures Alfred that Dolf will never gather enough money to fund his intended party. Not much later however, Dolf inherits a huge fortune. He founds his party, which through promising employment and change, quickly becomes a major and powerful political movement. Dolf eventually stages a coup d'etat and takes over the country. Political opponents, including Alfred, are imprisoned on the charge of high treason. Alfred and his friends barely escape and flee abroad to the neighboring country of Great Reedland. Not much later the King of Great Waterland himself flees as well, and Dolf proclaims himself Emperor Dolf I. Alfred and the other political dissidents however devised a plan to dispose of Dolf and steal Dolf's inheritances from the vaults of his palace. Without his money, Dolf's power quickly dwindles and he is forced to flee.

Dolf eventually makes an appearance as an illegal arms dealer and general criminal in further episodes. In the 43rd and 44th episodes, the King has decided to abdicate and for the first time democratic elections are held. Dolf once again attempts to rule Great Waterland as one of the three official candidates. In order to get ahead of other two candidates (Ollie being the first candidate) He hires some foreigners to sabotage the dam, which protects the Waterland from being flooded by the seawater. After the dam has broken Dolf cunningly withdraws his entry because he wants to help people and can not waste time to elections. Dolf then publicly funds the repairs of the dam, skyrocketing his popularity and prompting his reentry in the presidential race. He then, in an attempt to get rid of any compromising evidence, tries to kill Lispel, who saw the criminal act, but manages to escape and though heavily wounded, tells Alfred the truth on the flood.

Dolf manages to escape and continues his life of crime. In the final two episodes, Dolf becomes the henchman of an oil magnate who is attempting to get his hands on the blueprints of an environmentally friendly fuel, invented by Professor Buffon. After a fight, in which Dolf attempts to kill Alfred by pushing his car off the road, Dolf is again captured and is sentenced to be imprisoned for 26 years. This time however, he escapes, aided by a former member of his Crows Party, and takes Winnie, Alfred's girlfriend, hostage. In the series finale, and after a manic hunt, Alfred finds and tells Dolf of where Winnie is. After telling Alfred the whereabouts of her, it gave Dolf enough time to escape, only for him to be caught by the police and put into prison. 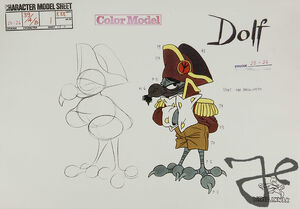 A crow-like monster in the opening sequence, possibly a representation of Dolf and the threat he and his party poses. 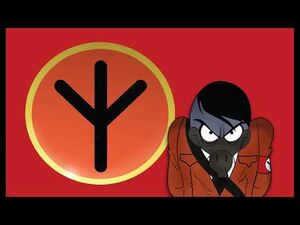