Make Alice lose her memory and force her into prostitution (failed).

Dr. Angus Bumby, also known as The Dollmaker while in his Wonderland incarnation, is the main antagonist of the 2011 videogame Alice: Madness Returns. He is also a posthumous antagonist in the 2015 animated short film Alice: Otherlands.

He is a psychiatrist and secret child sex trafficker, as well as both the killer of Alice Liddell's family and the mastermind behind the Infernal Train, Wonderland's corruption and Alice's insanity.

He was voiced by Alistair McGowan, who also played Carlos in the Robbie the Reindeer film Legend of the Lost Tribe.

When he was younger, Bumby was an undergraduate, being tutored by Alice's father, Dean Arthur Liddel. On his usual trips to the Liddel's for tea, he became fixed on the eldest daughter, Elizabeth Liddel, a love she didn't share. Bumby's lust for her grew even after threats of exposing the foul man until one night, he sneaked into the house, had his way with the poor young woman, knocked her out/killed her, and then set the house on fire to stay innocent.

Alice was the only member of her family who lived, and the fire became the cause of her slip into madness. Bumby later kept the key as a memory, using it later on to hypnotize others.

After Alice left Rutledge due to his rebuilding sanity, her nurse, Pris Witless, managed to land her a job as a maid. At the Houndsditch Home, Bumby hypnotized Alice, saying she could help her forget and recover. In truth, Bumby realized that Alice could potentially expose him for what he was if she regained her memories and was attempting to cover his tracks, in addition to wishing for him wanting Alice to become a prostitute.

However, Alice began to regress into insanity once more, finding her Wonderland being torn apart. Alice, now ready to face her own issues and wishing to investigate the cause, set off into her mind to stop her Wonderland from falling apart and regaining memories.

Alice's adventures shown light onto Bumby's evil deeds, and that he was also using Houndsditch Home to make children sell themselves as prostitutes with no memories.

Note: These events took place at the same time as when Alice confronted the Dollmaker, however, these events were in the real world and not through Alice's delusions of Wonderland

When she regained her memories, Alice found Bumby to interrogate him. Confirming her actions, he also told the girl that he also wanted to turn her into another of his workers. Angus Bumby showed an utter lack of remorse for his actions and in fact seemed to think that he should be rewarded for his behavior. She threatened Bumby with telling the police, but Bumby laughed it off, believing that no-one would believe her. And so, Alice snatches Elizabeth's key from Bumby and pushed him in front of a train, rightfully killing him.

The Dollmaker assumingly warped in to Wonderland after Alice had her first therapy session with the man. He used the weakened land to his gain, corruping it with Ruin and kidnapping Insane Children to make into dolls who serve him.

Later on, he took ontrol of the Dollhouse, using it as a factory to create his minions. He also managed to convince the March Hare and the Dormouse into making the Infernal Train, which he used to wreak havoc on the Deluded Depths and some of Queensland.

The Dollmaker tries to destroy Alice, but she manages to fight off his monstrous mooks and reach his main base of operations.

Note: These events took place at the same time as when Alice confronted Angus Bumby, however, these events were in Wonderland and not in the real world's Moorgate station.

When Alice meets the Dollmaker, she discovers the truth: that the fiend is no more than a twisted version of Dr. Bumby, trying to destroy what remains of her mind and turning children into his slaves.

Declaring that she'll stop his nightmarish train, the Dollmaker tries to kill Alice by turning her into a doll and shoving her in front of the train, to no avail. Alice then makes her way to the engine room, where she finds none-other than the Dollmaker.

In this final battle, the Dollmaker transformed further, becoming even more monstrous with a snake-like body of Ruin, hads holding on to his body, and his tongue becoming a nightmarish mix of doll heads and Ruin. To defeat him, Alice must avoid his powerful grabs and crushing blows, as well as fighting monsters made of Ruin. After beating him, the Dollmaker's influence dissipates, saving herself, Wonderland, and his victims.

Although Bumby/The Dollmaker don't appear in Alice: Otherlands, one of the Leviathan's tentacles does bare his face.

Appearing as a middle-aged man, Bumby has a slim figure and a long, thin face. He has brown hair, with a beard and mustache. He also has a bony nose and hands, pronounced cheeks, and a pointed chin. He wears a white shirt under a gray waistcoat and a red tie and black pants. He gains a top-hat and brown coat when outside.

The Dollmaker is a twisted version of Bumby, grown into a gigantic size. He has no eyes, with Ruin flowing down his face from his eye sockets, mouth, nose, and ears. The Ruin forms a mock beard for The Dollmaker. His hands have a sewn appearance, with nails and doll heads exposed on them.

Whereas Bumby finds children and has them sell themselves for money, the Dollmaker turns the Insane Children into dolls. He sees his prey as nothing more than toys for his sadistic mind to use, mirroring his basis with his thoughts on children. 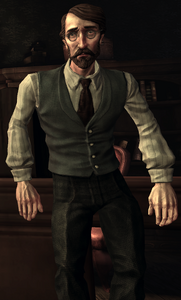 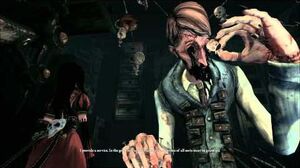 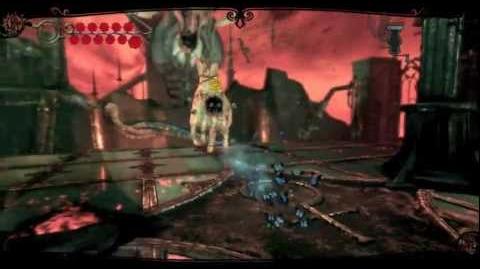 Retrieved from "https://villains.fandom.com/wiki/Dollmaker?oldid=3489199"
Community content is available under CC-BY-SA unless otherwise noted.