Get revenge on Quentin Lance for locking him up in Iron Heights Prison (failed).

Barton Mathis, also known as the Dollmaker, is the main antagonist of the Season 2 episode "Broken Dolls" from the TV series Arrow.

He is a psychotic and misogynistic serial killer who was locked up by Quentin Lance before escaping from Iron Heights during the Undertaking.

He was portrayed by Michael Eklund, who also played Richter Maddox in Smallville, Kit Nelson in Alcatraz, Michael Foster in The Call, Zane Morgan in Bates Motel and James in Poker Night.

The Dollmaker kills his victims by suffocating them with a flexible polymer which he pours down their throats. He then dresses the corpses as dolls and leaves them for the police to find. After murdering eight girls he was caught by police officer Quentin Lance and brought to prison but was released by Count Vertigo who managed to break out when the quake in the Glades destroyed part of the prison. After his breakout he resumed his killing.

After his breakout, which was kept secret to avoid panic, he resumed killing. As Officer Lance was forbidden from investigating, he contacted Arrow to catch the Dollmaker.

The same night, the Dollmaker attacks a young woman in her car and kidnaps her.

During the interrogation of Mathis' lawyer Arrow and Lance find a clue to where Mathis could have run. Arriving at a hotel where Mathis supposedly checked in they only find a newspaper article of the Dollmakers capture and a ringing phone. When Lance picks up the phone he is adressed by the Dollmaker who taunts Lance and kills the girl he previously kidnapped while Lance has to listen. Her body ist found the next night, dressed as a doll.

Arrow and Lance find out that the Dollmaker chooses his victims because of a special skin cream they use. Felicity Smoke volunteers to buy the cream to deliberately put the Dollmaker on her trace. The Dollmaker takes the bait and tries to kidnap Felicity but has to flee when Arrow puts an arrow in his shoulder. He is pursued by Arrow and Lance but due to interference from the police Lance is arrested and the Dollmaker escapes.

After he is released from custody, Officer Lance is ambushed and kidnapped by the Dollmaker, as is his daughter Laurel. On his way out of the police department parking lot, the Dollmaker shoots a guard. In his hideout the Dollmaker wants to make Laurel his new doll and has Quentin watch the whole scenario. Despite Quentin's pleas that Laurel has nothing to do with it, Mathis replied that he is hurting Laurel because that would be the ultimate way to harm Quentin. Both are saved by the arrival of Arrow who shoots the device that poisons Laurel. The Dollmaker tries to run but is attacked by the Canary. He manages to overpower her but is then shot in the shoulder by Arrow. When Arrow tells the Dollmaker that he will go to prison, the Canary throws a knife into the Dollmaker's chest, killing him. 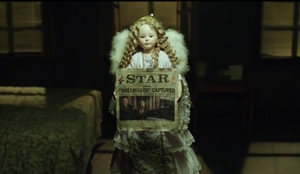 The Dollmaker's message for Quentin Lance. 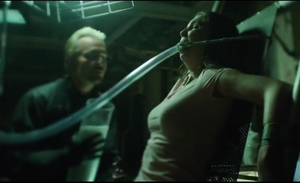 The Dollmaker killing one of his victims. 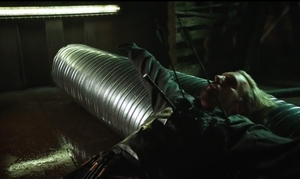