Leader of the Eyeless

Armed with sword and pistol

Influence over the Eyeless gang

Dolores Michaels is one of the two main antagonists in Dishonored: Death of the Outsider. She is encountered during the mission The Bank Job.

Michaels is the owner of a bank in Karnaca. She is also the leader of the Eyeless gang and a potential recruit for the Cult of the Outsider. The Cult has entrusted her the twin-bladed knife for safekeeping and Michaels has locked it up inside the safe in her vault. However, Billie Lurk, in her mission to kill the Outsider, infiltrates the bank in order to get the knife - putting her in the path of Michaels' ambitions.

She is voiced by Siedah Garrett.

Michaels is the owner of the Dolores Michaels Deposit & Loan Bank, where the wealthy and influential of Karnaca store their possessions. The bank is protected by high security, including trained guards, Clockwork Soldiers, arc pylons, electrified floors, a code system which switches every guard change and - most importantly - a secure vault invented by Grand Inventor Kirin Jindosh himself. Among her employees, Michaels is known for being a stickler for proper protocol and thus, all employees are advised to always have the required codes if they want to call Michaels.

In addition to her role as bank manager, Michaels is also one of the leaders of the Eyeless gang, a gang interested in the Outsider and the supernatural. Michaels' belief in the Outsider and the occult far overshadow that of her fellow gang leaders Shan Yun and Ivan Jacobi - her faith is strong enough that the Cult of the Outsider considers her a worthy candidate to be recruited. The cult deems Michaels' network of patrons and subordinates a potential way of spreading their influence and find her reliability and constancy to be unquestionable. Due to their faith in Dolores, the cult have tasked her with keeping safe the twin-bladed knife, an important artifact to the cult. To keep it safe, Dolores has locked up the knife in a safe inside her vault. Three keys are required to open the safe, one is in possession of Dolores, the others are owned by Yun and Jacobi.

Unbeknownst to both the Cult and the gang, Dolores in truth does not care about the cult's beliefs or the Outsider. Her sole motivation for joining the cult are her hopes to gain immortality by entering the Void. All the goals she once valued -wealth, power and influence- pale next to this newest goal and she finds that no material possession can compare to eternal life and thus even accepts living in some filthy mine, the cult's headquarter, for some time if that is what is required.

In order to prepare Dolores for her ascension into the Cult, the Cult of the Outsider has sent her several important documents, including a map to their commune. Although Dolores was tasked with keeping these documents safe, they were stolen by Eyeless gang member Eleuterio Cienfuegos. Dolores immediately started hunting down Cienfuegos and ordered his execution by the hands of Ivan Jacobi, but Cienfuegos' had already sent the documents to another person. After Cienfuegos' death, Michaels bank caused the illegal foreclosure of his pharmacy and tried to get back the documents. As they were not found among Cienfuegos' possessions, Michaels ordered the remaining items to be auctioned off. As Michaels' bank foreclosed every business of people that were eliminated by the Eyeless, this gained the attention of the public and Cienfuegos' daughter Theresia started a petition against the bank's immoral actions.

After the elimination of Grand Inventor Jindosh, Michaels has tasked one of her engineers with finding a way to open Jindosh's safe inside the vault. However, thus far the engineer has not yet found a way to open the safe.

During Billie Lurk's quest to kill the Outsider, she needs to break into Michaels' bank and steal the twin-bladed knife. In order to open the safe in the vault, Billie first tracks down both Shan Yun and Ivan Jacobi and steals their keys from them. After Shan Yun notices his key is missing, he flees the country for Tyvia, fearing retribution from Michaels for failing to keep his key safe. Jacobi, however, stays in Karnaca and Dolores sends to henchmen after him to clean up Jacobi's mess and to prevent any blunders he could commit in the future. Accordingly, the thugs kill Jacobi and stage his murder as a suicide by hanging him from the ceiling fan of his office. If Jacobi has already killed himself due to being exposed as the murderer of Cienfuegos, the thugs merely search his office for any incriminating evidence.

If Billie has doused the bank's ventilation system with laudanum, Michaels - and every other person in the bank - will be asleep and only wake up if Billie makes too much noise. If the laudanum is not used, Michaels will be right in her conversation with Mrs. Jennett. If Billie activates the button in Michaels' desk while the two talk, Michaels' hidden safe opens. This interrupts the conversation of the two women and Michaels apologizes and heads to her desk to close the safe again. Jennett dryly replies that while the bank seems to have many secrets, they are not well hidden. If Billie opens the safe again, Michaels apologizes to Jennett and tells her that this is a minor technical fault and that the bank's technology is always maintained to the highest standard. Jennett replies that this remains to be seen. If Bilie activates the safe a third time, an outraged Michaels apologizes once more for the inconvenience and claims that she needs to leave Jennett for a moment as she needs to find the technician. Jennett replies that she is used to entertaining herself and inspects Michaels' office while Michaels is gone. After Michaels returns to the office, both women keep walking through the office but do not interact with each other anymore.

Inside the office, Billie deals with Michaels either lethally, non-lethally or gets past her without Michaels' even noticing. Billie manages to obtain Michaels' key from a hidden safe opened by pressing a hidden button in a safe. Opening the vault, Billie manages to steal the twin-bladed knife. If Michaels is left alive during the heist, her reputation will be destroyed once the public gets wind of the break-in. This causes the customers to storm onto the bank, demanding their valuables back while the bank tries to calm them. 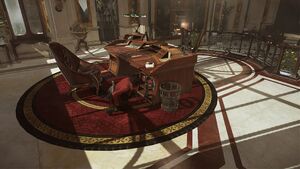 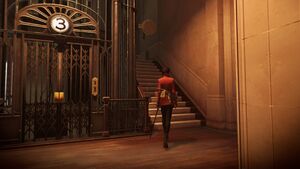 Michaels looks for an engineer 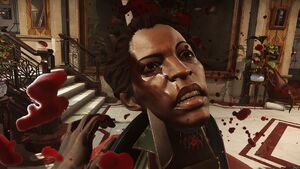 Michaels is killed by Lurk