Harry Potter and the Order of the Phoenix

Senior Undersecretary of the Minister for Magic (for years until 1998)

Ordering authoritarian regulations.
Corrupting Hogwarts.
Gaining power.
Disciplining and punishing those who disagree with her.
Persecuting and imprisoning muggle-borns.

Professor Dolores Jane Umbridge, simply known as Dolores Umbridge, is one of the antagonists of the 2003 book, Harry Potter and the Order of the Phoenix, and its 2007 film adaptation of the same name, and a minor, but pivotal, antagonist in the 2007 book, Harry Potter and the Deathly Hallows, and its separate 2010-2011 two-part film adaptations of the same name.

She was a Ministry of Magic official and served as Senior Undersecretary to the Minister for Magic under three successive ministers: Cornelius Fudge, Rufus Scrimgeour and Pius Thicknesse. Umbridge was designated as Defense Against the Dark Arts teacher at the Hogwarts School of Witchcraft and Wizardry by order of the Ministry in 1995 and was later promoted to Hogwarts High Inquisitor and eventually Headmistress. This was part of a Ministry effort to keep the school and Harry under control. She was removed from these positions later on in 1996, when Voldemort was revealed to be alive, and returned to the ministry, working as a judge under Voldemort's supremacist reign.

In the films, she was portrayed by Imelda Staunton, who also played Mrs. Lovett at the Chichester Theatre Festival's adaptation of Sweeney Todd, and Alexandrina Victoria Hannover in The Pirates! In an Adventure with Scientists!.

Umbridge was very ambitious yet extremely vicious, immoral, manipulative, and sadistic woman who possessed an extremely high opinion of herself. She evidently believed herself above the law, as shown when she used the Black Quill (a torture device that causes the user to write in their own blood) on Harry and then the entire DA. She was even prepared to use the Cruciatus Curse on Harry despite him being a teenager and it being illegal to use. However, she justified this this by saying, "What Cornelius doesn't know won't hurt him". When she was placed in charge of registering Muggle-borns, she was incredibly corrupt and malevolent; she had imprisoned Muggle-borns under outrageous accusations and under the prejudiced beliefs that these witches and wizards stole their magic from Pure-bloods.

Despite being a teacher at Hogwarts Academy, she openly hates children and because of this took a great pleasure in enforcing torturous punishments on students. When she realized she was tricked when Hermione and Harry lured her to the Forbidden Forest, Umbridge flatly said "I really hate children.". While under control of Hogwarts, she enforced strict and somewhat tyrannical rules that the students were forced to comply. For instance, one of the few was that boys and girl could not be in close vicinity of one another, and broke up a wizard and witch kissing with her wand. Umbridge was a colossally prejudiced and inequitable woman as well, she believed that half-breeds, half-bloods and the Muggles were inherently inferior and registered them with extreme cruelty at the Ministry of Magic under Lord Voldemort's fascist reign.

Umbridge was xenophobic and intolerant towards half-breeds as well. Because of this, she was extremely impertinent and argumentative towards Hagrid the Gamekeeper and antagonized him as he was half-giant. She additionally spoke in an insulting and scornful tone towards the centaurs in the Forbidden Forest.

Umbridge was condescending and even cruel towards her fellow teachers, she interrupted Dumbledore's start of year speech with her trademark fake cough. She later did the same to Professor McGonagall who also offered her a cough sweet. She also insulted Professor Flitwick when she measured his height or mocked Professor Snape for his unsuccessful attempts to become Defense Against The Dark Arts teacher. Umbridge was especially vituperative and disrespectful towards Divination teacher Professor Trelawney and asked her to predict something for her. Profesor Trelawney said it is impossible to predict something on demand which made Umbridge dissatisfied with that answer. However when Umbridge was told she was in "terrible danger", she merely said, "good".

She was also a dishonest and fraudulent liar. As noted earlier, she would have preformed one of the Unforgivable Curses on a teenager and would never have told the Minister. She claimed that a locket, which was also a Horcrux, was in her family for generations. As such, she was extremely hypocritical, as she repeatedly punished Harry Potter for lying to others from her perspective even though she herself would deceive others for personal gain.

Umbridge attempted to mask her wickedness by giving off a sweet and pleasant demeanour, she dressed and spoke as a person's grandmother; her creator (J.K. Rowling) describes her personality as "poisoned honey". She wore a decorative black bow on her head (in the novels only), dressed exclusively in pink, adorned her office with cat plates (though simply liked pictures of cats and considered the real animal to be too troublesome), and enjoyed drinking tea along with cakes and sweets. Also, when first meeting her in her office, Harry resembled Umbridge's appearance with that of a toad. Even after it being clearly obvious that Umbridge was an evil person, she still kept her sweet facade which only ascertained how much of a monster she truly was.

Despite her evil nature, Umbridge appears to be good friends with Cornelius Fudge, the Minister for Magic referring to him by a first name basis and Fudge placed Umbridge in control of Hogwarts. Then again, this did not stop her from lying to him about using the Cruciatus Curse on Harry more than likely due to her arrogance, something that Cornelius would never approve. While she spoke highly about him, Dolores in reality just saw in Cornelius nothing more than a pawn, as demonstrated when Fudge was sacked and fired from his position. Instead of siding with him, Umbridge didn't give any support to her former employer and just sided with his replacement Rufus Scrimgeour.

Another similarity between Cornelius and Umbridge was that they were both quite paranoid and were worried that Dumbledore was amassing a secret army and weapon that would end the Ministry of Magic. However, Dolores was crueler in pursuit of her answers, when she became the Defence Against the Dark Arts Teacher she forbade any students from using their wands or magic as she believed it would only further Dumbledore's Army.

A sadistic and cold-blooded woman who rarely ever raised her voice or lost her cool, Umbridge was able to maintain a calm, nearly worry-less persona. Her voice was incredibly relaxed and rarely displayed genuine emotion, aside from making a sinister smile while making Harry use her "special quill". While extremely rare, Umbridge would occasionally lose her temper, like when she screeched at Harry Potter for insinuating that Lord Voldemort had returned and later slapped him when she caught him and the DA sneaking into her office. While being dragged deeper into the Forbidden Forest by centaurs, she was seen screaming in terror.

Although she was a noticeably powerless witch, Umbridge was a very intelligent woman which was shown when she was nineteen years old she enrolled in Improper Use of Magic Office and thirteen years later she became the head of the office. She is quite conniving and manipulative, as shown when she was able to let loose a Dementor on Harry Potter and his cousin Dudley which only highlighted her ruthlessness. Despite her intelligence, Umbridge was extremely gullible and unsophisticated at times, and was easily deceived by Hermione's deception that led her into the Forbidden Forest.

But what makes Umbridge more despicable than other Death Eaters is that she was abnormally self-righteous. As stated above, she cruelly forced Harry to write in his own blood using the Blood Quill. After the boy finished writing the single sentence "I must not tell lies", she then coldly said, "You know deep down, you deserve to be punished." However, the only thing that Harry had done was speak out of line and he didn't remotely deserve something so monstrous as a punishment. Umbridge was always a glutton for power to the point of immorality in its pursuit, but in a position of respect she viciously abused it. Her corruption carried out by the way she gave people who grovelled or sucked up to her, such as Malfoy power in her ranks. She dished out a vast multitude of sadistic and vicious punishments on a myriad of pupils simply to instil people's fear for her. This shows that she didn't want to be respected but feared, as respect would imply that she was equal to others, when she thought herself to be above everybody else.

Even at a young age, Umbridge lacked any moral center whatsoever which carried out by the size of her wand and not her height. 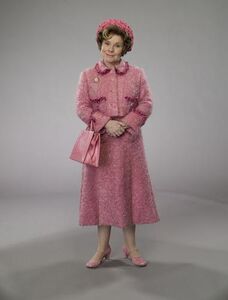 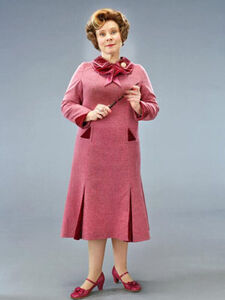 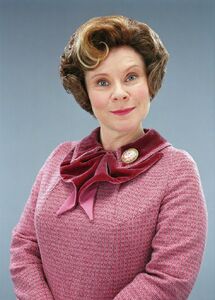 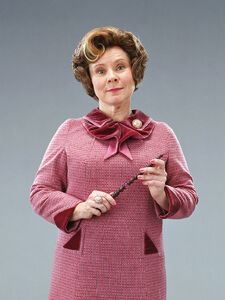 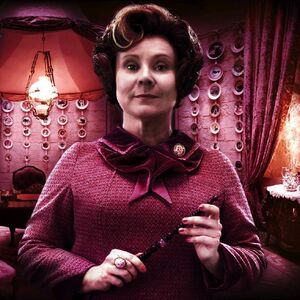 Dolores Umbridge's breakdown.
Add a photo to this gallery

Retrieved from "https://villains.fandom.com/wiki/Dolores_Umbridge?oldid=3609752"
Community content is available under CC-BY-SA unless otherwise noted.