Leader of the Space Circus Troupe

Recreate the entire universe as a circus stage by destroying unnecessary planets.

Domidoll is the evil alien ringmaster of the whimsically menacing Space Circus Troupe aboard their fantastic Spaceship Flying Tent, and he is the main antagonist of the 2016 movie Doubutsu Sentai Zyuohger the Movie: The Heart Pounding Circus Panic. His goal is to recreate the entire universe as a circus stage by destroying unnecessary planets. In order to achieve this goal of his he used the Zyuman circus to gather the energy of the children's cries to create a powerful energy, and attempts to destroy Earth with its powerful energy.

He was portrayed and voiced by Takashi Yoshimura.

In the present, he makes his first appearance piloting Cube Condor as he attacks Zyuoh King once he acquires the other two Zyumen and their vehicles he combines them with the Cube Condor to become Condor Wild which he now pilots with the restrained Amu and Tusk. Once he knocks Yamato out of the mecha he captures Sela and Leo to take them towards his base of operation.

During the flashback leading up to this event he revealed his true form as he captured the children who are watching the performance while sending the adults out of his base not before long he sends out a couple of Moeba to prevent the team from entering his base. Speaking of back inside his base he'd took Perle Cube Condor so he can pilot it.

According to Naria, Domidoll has been wreaking havoc across the cosmos by turning several planets into circus balls and rearranging stars into rings of fire.

Back to the present, he was marveling at the children's job to produce more crying to power up his machine to destroy planet earth however when he sees Zyuoh Eagle attempting to break into his hideout he demonstrates the energy that he collected by having them fired at the flier which he did sending Zyuoh Eagle crashing down to the ground.

Back inside when he heard the children laughing he jumps back down to the dungeon to force them to cry some more, but Perle does not like that idea so she wants him to give her Cube Condor back, but to his response she'd be killed immediately. So the disguised Zyumen tried to prevent him from killing Perle, but he stops them in their tracks by tying them up with the chains as they dangle from the ceiling.

Once that was done he is then about to finish Perle off once and for all, but he was stopped by the arrival of Zyuoh Eagle as he used his vehicle to blast a hole in the Space Circus right where the dungeon is at. So with that said Domidoll starts attacking Zyuoh Eagle as he manage to knock him out of his transformation state and he pins him to the floor with his foot, but thanks to Perle's determination to stop crying she'd cheered on to the Zyuohgers making the Zyumen Performers and the children to cheer them on too thus causing the base to lose the crying energy it needs which makes Domidoll very worried.

So in retaliation Domidoll he sends Yamato towards the crates, but he was knocked back by a rolling ball giving Yamato the time to free his friends, so they can take back their cubes from and as for Cube Condor in Domidoll's possession it was knocked out of his hands and back to the rightful owner.

Once that was done, Domidoll was so mad at them for what they did to ruin his plans, but to their response was to never messed with this planet. So they transformed and sent Domidoll flying out of his base giving Zyuoh The World enough time to bring the Space Circus back down. So he has the Moeba to get them, but they were wipe out by the team and the space circus crashed to the ground freeing everyone inside and the children be reunited with their parents.

This made Domidoll very angry so he had battled the team himself, but he was taken out by the team with instincts Awakened and Beast Unleashed as Zyuoh Gorilla suckered punch Domidoll to the destroyed base.

However he fused himself with his spaceship to become this giant Complete form as he battle Wild Tousai King. However he used his hand whip to bind the mech and sends jolts of electricity at the same time, but due to Zyuoh Condor's illusion to create Zyuland giving the team and the mech enough energy to free themselves from Domidoll's grasp and continue the fight and equipped Cube Condor as a sword. After that Domidoll was then destroyed by this finisher called Condor Zyuoh Infinity. 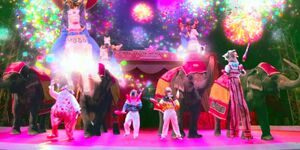 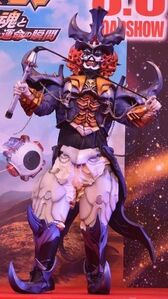 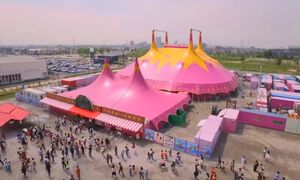 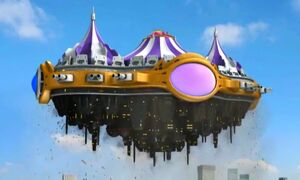