Wander Over Yonder: The Greater Hater

Searching for and collecting Volcanium X for Lord Dominator.

Aid Lord Dominator in her quest for galactic destruction.

Genocidal Robots
The Dominator-Bots are recurring robotic characters from the Disney animated series Wander Over Yonder.

They are Magma Robots created by Lord Dominator who help her in her quest to conquer the galaxy.

They look like black orbs and wear a laser cannon installed at the front of their faces, and red crack-like lines protruding from it. They also have four limb-like appendages that go form black, to red, to light orange in the form of magma.

Dominator-Bots look like Lord Hater's Watchdogs, specifically in that they are diminutive "one-eyed" creatures with a red and black color scheme, but they are stronger than them.

Dominator-Bots are emotionless, calculating, and obedient. They never travel alone, but don't have a mind link. They are built to serve Dominator tirelessly. Additionally they are granted of independent action and have an opinion. Not all Bots are built alike.

All Bots seem equipped with a blaster. Supposedly, they can all also apply special handcuffs. The thing that makes them dangerous is the ability to regenerate. If a Bot gets damaged, it will repair itself using magma Dominator got from destroying planets, however, if they are destroyed or damaged too much, regenerating won't occur. When one gets light damage, it's personality may alter, but it will change back if it gets repaired.

The Bot advisement system always ends with "suggested course of action" and then the suggestion. If it involves destruction, the suggestion is either "dominate" or "don't dominate." A bot's opinion isn't always a good one.

Between Dominator-Bots there is a subspecies of their prototype called Dominator Probes; robots used more for spying than invasion. These subspecies is in charge of search and get Volcanium X, a volcanic substance which Dominator supplies her army, ship and weapons. Volcanium X is also needed for Lord Dominator in her quest for galactic destruction. Between this subspecies the two most famous specimens in show are Bot 42, who failed in get Volcanium X for his leader, and Bot 13 who became friend of Wander and deleted the planes info of the Volcanium X planet which Dominator sought. Both were disintigrated by their leader for failing her. 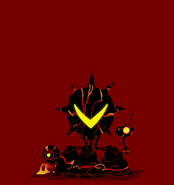 Retrieved from "https://villains.fandom.com/wiki/Dominator-Bots?oldid=3771482"
Community content is available under CC-BY-SA unless otherwise noted.