Dominatrix exists in Praetoria, a reality parallel to the game's main reality dubbed "Primal Earth" by residence of "Praetoria Earth". Dominatrix is the alternate reality version of Ms. Liberty from Primal Earth. In both realities Marcus Cole discovered The Well of the Furies - a dimensional nexus point for power as a concept that exists across all realities in various forms. Where Primal Cole refused to be the avatar of the well and compromise his own since of right and wrong to be under it's influence, Praetoria's Cole took up the offer and create a world ruled by his powers instead of protected by them. In both realities, Cole found two other items of legend next to the well on it's secret island, Pandora's Box and The Girdle of Hera. Opening Pandora's Box created a butterfly effect that ignited meta-human appearances all over the world through various manipulations of reality and chance - heralding in the mass number of meta-humans that exist in both worlds. The Girdle of Hera gifted whoever wore it with super-human strength, speed and endurance. Each Cole gave The Girdle of Hera to his love interest and later wife, Monica Richter who was known as "Maiden Justice" but eventually died with the Girdle passed onto their daughter Alexia-Duncan-Cole, Megan's mother. It was at this point events divert wildly, as in Praetoria Megan died earlier, killed by Cole's assassin Praetor Sinclair AKA "Chimera" when it was discovered she was planning a coup against her father. Though it turned out to be bad information, by the time Cole and Sinclair found out, Alexia was already dead but the Girdle of Hera, passed on to Megan. Megan had lived a repressed life, her ambition nurtured by her grand-father, but her mother trying to build her character by denying her any special treatment, as a result of this psychology Megan used the Girdle of Hera to completely live out all her repressed dreams of power over others. Her-long-term-goal, to sew a "Great love" between her and her grand-father. (The game is extremely coy as to what sort of love she desires, but she frequently swoons whenever she talks about her grand-father). 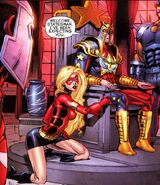