Assisting the Quantum organization with their nefarious operations.

Create an artificial drought and stage a coup d'état in Bolivia to create a puppet regime led by General Medrano which will allow him to make a deal with the new government that would make his company the sole utilities provider that would sell back the water at grossly inflated prices.

Dominic Greene is a major antagonist in the James Bond reboot series, serving as the main antagonist of Quantum of Solace and a posthumous antagonist in Spectre.

A wealthy environmentalist, Greene runs a corporation named Greene Planet, which is a front for Quantum, a terrorist organization that Le Chiffre and Mr. White also work for.

Greene is tasked by the organization with securing a piece of land in Latin America that is rich in natural resources. To that end, he plans to restore exiled dictator Luiz Medrano to power in exchange for the land. Greene also has a connection to Vesper Lynd, and may have been one of the men who was blackmailing her prior to the events of Casino Royale. Following his death, he is revealed to have been an agent of the criminal organization Spectre.

He was portrayed by Mathieu Amalric.

Greene first appears when Camille Montes confronts him in Haiti over his order to have her killed by Edmund Slate. He is then interrupted by Luiz Medrano, whom Camille has made it her mission to kill. The General takes her on the boat, but Bond saves her. On board his private jet, Greene meets with CIA representatives Gregg Beam and Felix Leiter; Greene tells Beam to get rid of Bond, much to Leiter's dismay. Greene has developed a relationship with the CIA, gaining their support in overthrowing the existing Bolivian government with understanding that the United States will profit (literally and figuratively) from Greene's influence in Bolivia with regard to oil, which he has led the Americans to believe he has discovered.

Greene attends a production of Tosca at an opera house in Bregenz, Austria; using remote communication earpieces, a conference call of sorts is held during the performance among Greene and fellow members of Quantum, all of whom are scattered about the opera house audience. Bond obtains an earpiece of his own and brazenly informs them that he is listening in. With their meeting compromised, the Quantum members — Greene included — leave the opera house. Greene goes to his car, where Bond gets one of his assailants and throws him off the roof, on to Greene's car. Greene is next seen at his party, delivering a speech on conserving South America's rainforests, but when Camille crashes the party, Greene threatens to kill her, at which point Bond steps in. Greene sends his henchman and cousin Elvis after them, but Agent Fields, a an MIG agent from the local British consulate, "accidentally" trips him up.

Greene utilizes his eco-friendly company Greene Planet as a cover for his involvement with the international organization Quantum. Greene has spearheaded a relationship with Medrano; through a mutually beneficial partnership, Greene has promised to use Quantum to overthrow the existing Bolivian government and place Medrano in power. In exchange, Greene and Quantum desire land rights to a seemingly barren tract of land deep within the Bolivian desert; ostensibly, this desolate piece of land could yield precious reserves of oil. Bond and Camille stumble across dynamite-created dams deep within a sinkhole in the Bolivian desert; these dams effectively divert vast resources of water into a single, concentrated area. Bond realizes Greene isn't after oil: instead, Greene and Quantum intend to privately own and control the whole of Bolivia's water supply. Upon Medrano's agreement to accept Quantum's aid in overthrowing the Bolivian government, Greene presents Medrano with a contract for the privatized water service Quantum will provide for the country — at double the rate.

Bond learns that Greene is staying at the Perla de las Dunas, an eco-hotel in the Bolivian desert (filmed in the Atacama Desert). He and Camille infiltrate the building and go their separate ways; Camille to find Medrano, while Bond goes after Greene, who is armed with a fire ax. An explosion of one of the hydrogen fuel cells that power the hotel sets off a chain reaction as an unarmed Bond fights Greene. With the hotel burning down around him, Bond knocks out Greene and leaves to find Camille, who has already killed Medrano.

As they escape the hotel, they see Greene in the distance running for his life. Bond captures Greene and takes him deep into the Bolivian desert where he interrogates Greene about the secrets of Quantum, including the truth that Vesper's boyfriend Yusef Kabira is a Quantum agent who faked his capture to blackmail Vesper into working for Quantum in the first place. With the information at hand, Bond spares Greene by leaving him in the middle of the desert and throwing him a can of motor oil, betting he will make it 20 miles before he considers drinking it, a reference to Fields' murder at Quantum's hands.

Following Kabira's arrest, M informs Bond that Greene was found in the middle of the Bolivian desert with two bullets in the back of his head (executed by Quantum) and motor oil in his stomach.

In the film, it is revealed that Quantum was in fact a subsidiary of Spectre, making Greene an agent of the latter organization. It was also revealed that Greene was nothing more than a pawn alongside Mr. White, Le Chiffre and Raoul Silva, all of them used by Ernst Stavro Blofeld (the head of SPECTRE) as part of the latter's true plot to inflict psychological pain on Bond. It is also implied that Blofeld ordered Greene's death as punishment for spilling the truth of Quantum to Bond.

Greene showed a highly opinionated and callous personality. He was quite a social climber, well-respected for his wealth, intellect, and so-called ambitions. However, underneath it all, he was a cruel, malicious, and arrogant man. He covered his tracks splendidly and knew quite a bit about how the Secret Services of the world work.

He was highly well-connected, and was able to side with the Bolivian chief of police and also General Medrano. Greene was quite cunning and manages to blackmail Medrano into signing over the money that Greene demanded (Double of what they had previously agreed), at the same time showing to Medrano how ruthless Quantum could be and that Medrano, whether he liked it or not, was completely expendable to them.

Dominic Greene was extremely devious and nobody could predict what his next move was going to be. Unfortunately, he had a habit of picking the wrong people to side with: He lost General Medrano to Camille, and beforehand he lost the Bolivian chief of police to James Bond. He was sadistic, taunting Bond when the latter believed Camille to have been killed by General Medrano. This showed him to be quite reckless, as Greene was about to fall to his death when he taunted Bond, who could have easily killed him for that remark. Greene was a coward, and did whatever he could to escape Quantum, and the wrath of James Bond, after he revealed every last secret of his secret organization. 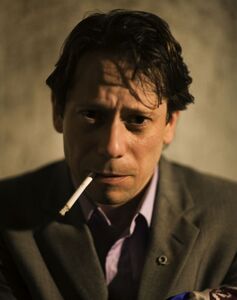 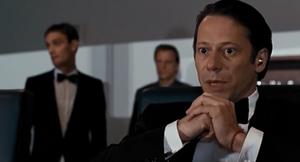 Greene at the meeting of Quantum's heads. 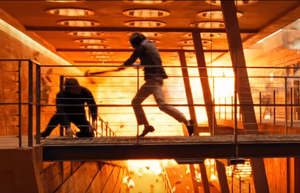 Greene and Bond during fight at the exploding hotel. 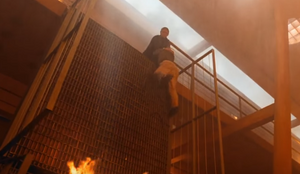 The fight ends with Greene at Bond's mercy. 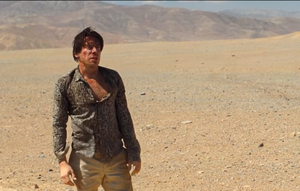 Greene being stranded in the desert by Bond with a can of oil, before his unseen death.