Owner of the Vixen Club

Kidnap Victoria to deliver her to Blake Dexter (failed).

Dominic Osmond is a minor antagonist in the video game Hitman: Absolution. He is the owner of the Vixen Club, a long-time friend of Blake Dexter and Edward Wade, and the first target in the mission "Hunter and Hunted".

He was voiced by Jon Curry.

Dominic Osmond was born sometime in the early '40s, most likely in either Chicago or South Dakota. Not much else is known about his past other than at some point in his life, he became the owner of the Vixen club, and friends with Blake Dexter and Edward Wade, and an informant for Dexter.

In 2012, Osmond learns about Victoria, and leaks this info to Blake Dexter, who then desires to find her. Birdie would later leak this info to Agent 47, which results in 47 finding and killing Osmond. 47 then listens to a phone call which confirms that Osmond was in fact the one who led Dexter on Victoria's tail, and knows who 47 is. It also confirms that Birdie had his own motives for wanting Osmond dead.

Not much is seen of Osmond's personality on screen, off screen however, he is said to be a ruthless and sadistic strip club owner who forces the women at his club into prostitution with threats of violence. He also, along with Wade, and possibly Dexter, likes to rape and kill his strippers purely for fun, under the guise of "sending them to Hawaii". 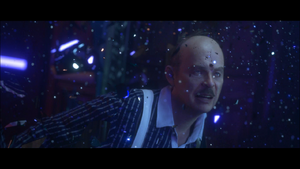 Osmond's death in HITMAN (2016)
Add a photo to this gallery

Retrieved from "https://villains.fandom.com/wiki/Dominic_Osmond?oldid=4158260"
Community content is available under CC-BY-SA unless otherwise noted.