Bloodstained: Ritual of the Night

Dominique Baldwin is the main antagonist from the indie metroidvania Bloodstained: Ritual of the Night and a major protagonist in Bloodstained: Curse of the Moon 2. Dominique is an exorcist sent by the church in order to help Miriam in her journey to defeat Gebel and stop the demon invasion. She initially acts as one of the supporting characters by selling demonic crystals to the protagonist. However, as time went on, it's revealed that Dominique is the main antagonist of the game, with an agenda of her own.

Bloodstained: Curse of the Moon 2

Bloodstained: Ritual of the Night

Dominique appears as a beautiful and frail woman with long blonde hair and wearing glasses. She wears a nun-like dress, which identifies her as a servant of the Church.

After revealing her true nature, her appearance changed slightly; as she fuses with the demonic shard, her left eye is covered with a patch of red crystal as does some parts of her outfit.

Dominique initially appears as a kindhearted young woman that helps the main hero, Miriam, accomplish her journey by selling her demonic shards so that Miriam could suppress the demonic energy during her quest. At some points, she even has several humanizing moments such as befriending an innocent 12 year old girl named Anne. However, this was all part of the act put by Dominique, herself.

In reality, Dominique is a woman who is obsessed with power and will do anything to achieve it, no matter what it takes, to the point that she would kill anyone who gets in her way. Her personality could be attributed to the loss of her parents due to the demonic invasion, to the point she renounces her faith to the god that she worships.

Dominique develops a rather Social Darwinistic philosophy, as she considers the people who died in her plans and ambitions to be weaklings. 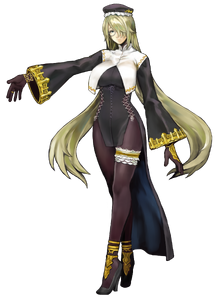 Dominique Baldwin in Bloodstained: Ritual of the Night. 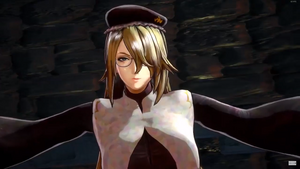 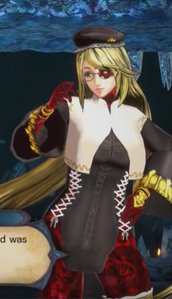 Retrieved from "https://villains.fandom.com/wiki/Dominique_Baldwin?oldid=4362045"
Community content is available under CC-BY-SA unless otherwise noted.