Villains Wiki
Register
Don't have an account?
Sign In
Advertisement
in: One Piece Villains, Anime Villains, Fighters,
and 17 more

Patriarch of the Accino Family

Lying down on his sofa and drinking.

Defeat Luffy and the Straw Hat Pirates and add their Jolly Roger to his captured pirate flag collection (all failed).

Continue collecting pirate flags (failed).
Continue to capture and turn in pirates for their bounties (failed).

Don Accino is an anime-only villain in in the anime/manga One Piece. He is the main antagonist of the anime-only Ice Hunter Arc and the patriarch of the Accino Family.

He was voiced by Tomomichi Nishimura in Japanese and Roy Gestaut in English.

Don Accino makes his first appearance in the arc looking at his collection of pirate flags that he obtained by defeating the pirates that previously owned them. His children come in while he is still gazing at the flags. While they were there, it happened to be Don Accino's birthday which gave them the reason to celebrate this great occasion. After Don was informed by his children's plan to give him the Straw Hats' bounty as his birthday present, Don toasted for his children's success and began the plan to hunt for the Straw Hat pirates.

Don Accino would later be seen with his eldest son, Campacino, who alerted Don that the Straw Hat's ship was somehow able to escape Hyokaido. However, Don told him not to worry and stated that they should instead focus on capturing the Straw Hat's flag in order to rectify the situation. His orders were then passed onto from Campacino to Don's youngest daughter, Lil.

Don was shortly afterwards seen drinking, while he eagerly anticipated his "present". He briefly noticed Zoro go past the window, but Campacino stated that he's probably too drunk. He would later be seen lying on an iceberg, becoming very annoyed at Campacino, that the Straw Hat's Jolly Roger hadn't arrived already and that he couldn't start the party without them. Campacino then left Don when he was called by Brindo, leaving Don all alone. He would be confronted by Zoro, with whom he took a drink. Don bragged about his pirate flag collection, just as one of Lil's flying birds brought in the Staw Hat's Jolly Roger, much to Zoro's chagrin. Don then asked Zoro:"A pretty flag, do not you think so too... 120,000,000 bounty-head, Roronoa Zoro?" (showing that he is aware that Zoro is a member of the Straw Hat pirates).

Don then prepares to fight Zoro, who slashed at him with his sword, but the strike passed through him. This got Don mad, due to Zoro almost cutting one of his flags. His children arrived, but were unable to calm him. They were able to dispose of Zoro via a trap door and in order to try and calm down Don Accino. Despite this, they were unable to contact him and call to Brindo and Campacino for assistance. After the duo arrived, they were able to successfully cool Don off (who was beginning to trigger his Devil Fruit abilities while he was angry). By this time, Luffy had arrived at Lovely Land and shouted out for them to return his flag.

Don watched him and cooled down and was eager for a fight. After his children are defeated, he walked out into the cold and begins to face off against Luffy. Luffy in turn confronted Don and demanded his flag to be returned. This caused Don to become enraged and "heated up" through his Devil Fruit abilities, known as the Hot-Hot Fruit. Luffy tried to punch him, but to no effect as Don could heat up any part of his body which caused Luffy to not be able to land a single hit on him. However, Luffy improvised and used a slab of ice and rammed it into Don with a Gum-Gum Bazooka attack.

Meanwhile, Puzzle fought Campacino and successfully defeated him. Simultaneously, his crew secured their ship, which had been stolen by the Domo Penguins. During the battle, the Don got even more enraged than before and Lovey Land started melting as a result of Don's anger. Don utilized his Devil Fruit power at 5.500 degrees and started throwing "atsuyaki eggs" (heatballs) at Luffy. When this proved to be futile, Don then amazed Luffy with "Atsu Atsu Gatling", which was a copy of Luffy's technique, though the punches themselves did not hit Luffy, only the generated heatballs did.

Eventually, Luffy used Gear Second in order to end the fight quickly. He punches Don and managed to throw him into the Accino Family's castle building. The majority of the flags from Don's room either got burnt or were left flying in the air. Chopper (who arrived here before with Puzzle and Jiro) found the Straw Hats' flag, but in the commotion took another one instead.

Don saw what was left of his collection, and as a result used his nose to gust hot air and propel himself to the ground, where he sweared to get Luffy with his own hands. As the battle between Luffy and the Don continued, Lovely Land melted away before their eyes. Soon, the temperature heated up so much that a rift in the iceberg appeared, being completely full of lava, that was released earlier during the fight, into which Don fell into during his fight with Luffy. However, thanks to the power of his Devil Fruit, he was able to survive and heat up even more, to 10,000 degrees. Don then attacked Luffy, trying to make him fall into the lava.

However, his attempt failed, thanks to Nami's Cool Balls cooling a patch of lava into stone, but he then proceeded to laugh at Luffy's dreams and about pirates risking their lives for "such a stupid thing" like a pirate flag. This finally caused Luffy to be serious and somehow enabled him to actually physically punch Don, without getting burnt, hurling him into the ruins of Lovely Land, defeating him. The Straw Hats then departed, seeing as Hyokaido began to rip apart, and ensured to put the flag on the ship before Luffy noticed that it had ever been gone.

Meanwhile, on the Accino Family's ship, Arbell apologized to Lil for ignoring her and the entire family (minus Campacino) presented their Papa with his birthday cake, which Don mistaked for Luffy's Straw Hat and heated up so much that he burned through the iceberg, which he was floating on. It is unknown what happened to him afterwards or if he survived after burning through the iceberg (due to his Devil Fruit abilities nullifying him to move in the ocean and causing him to sink like a hammer). 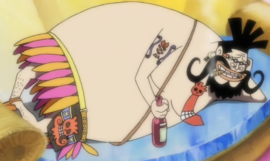 Accino with the Straw Hats flag

Accino heated up from being angry 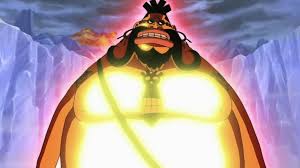 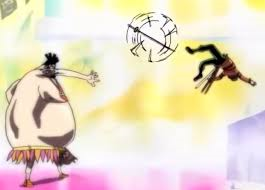 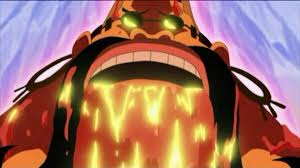 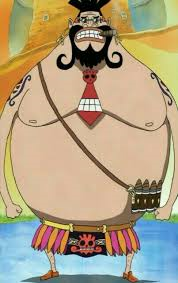 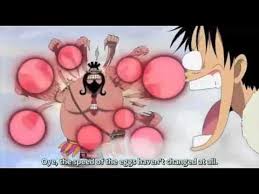 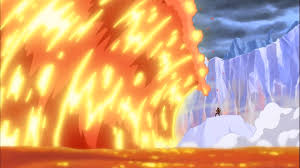 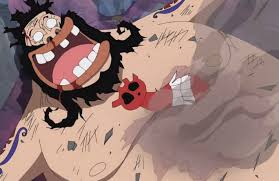 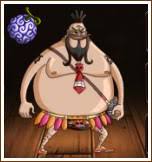 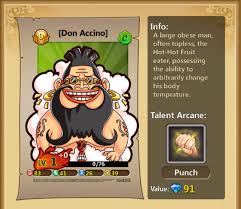 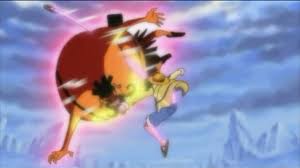 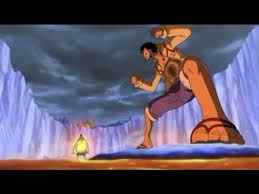 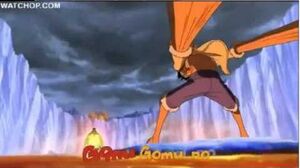