Don Dynamit was a recurring villain of the Austrian TV show "Tom Turbo", or, as it was called back then, "Die heiße Spur". He is a mobster who is mostly referred to as "the most dangerous villain in the world", however this title was also held by Fürst Finster. As the two never appeared in the same episode, it is unknown if both held that title or it was actually only referring to one of them.

In one of his appearances, Don Dynamit is after a dress belonging to the aunt of Tom's boss Thomas. He first hires one of Tom's other recurring enemies, the shape-shifter Sigi Schlitzohr, to make Tom and Thomas believe that his aunt is Don Dynamit's girlfriend, and later sends a henchman into Thomas lair to steal the dress, however it is later taken away again by Tom.

In another episode, he lures Tom's archenemy Fritz Fantom into a café, where he orders him to find out how to create a wormhole. With an American device that can create wormholes, Fritz Fantom kidnaps all the dogs from the police force. Don Dynamit then broadcasts on TV, informing the citiziens that he hid a poison, which makes anyone eating it breath fire, all across Vienna, and demands two billions for it. Thomas realizes that Don Dynamit ordered Fritz Fantom to kidnap the dogs with the wormholes so they couldn't track down the poison. Later, Tom manages to free the dogs, ruining Don Dynamit's plans. He tries to phone Fritz Fantom, however Fritz Fantom was accidentally transported to a distant planet by a wormhole.

Another time, Don Dynamit can be seen among other villains, handing money to Fritz Fantom for Lord Spider, who offered to destroy Thomas and Tom Turbo with a special button. However none of the villains wants to go to Lord Spider's fortress, deeming him to be too powerful for them. Later, when Tom happily leaves the fortress with Lord Spider's money after revealing that Lord Spider was bluffing to get the money from his fellow villains, Don Dynamit and the other villains rage.

In a two-parter episode, Fritz Fantom is told by Don Dynamit to prevent what they both call "the great danger". Their plan includes ordering Dr. Gruselglatz to erase Tom's and Thomas' memory concerning an event taking place in the UN building. Tom finally realizes that a conference room filled with Tom Turbos from other countries. Dr. Gruselglatz hacks the doppelgängers as ordered, but then decides to use them for his own plans. He is quickly betrayed and tied up by Fritz Fantom, who wants to control the bikes by himself, however he too is then betrayed and tied up by Don Dynamit, who orders the bikes to drive all the other people out of the building so it belongs to him and he can rule the world. Tom and Thomas finally remember what they were supposed to do in the building: the "great danger" the villains talked about was Tom teaching copies of himself made all around the world about how to use their tricks properly to be crime fighters like him. Tom manages to reprogram his doppelgängers, who trap Don Dynamit in the building's door. 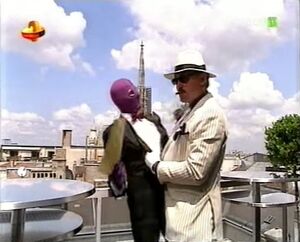 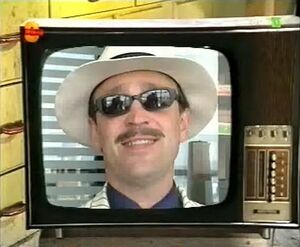 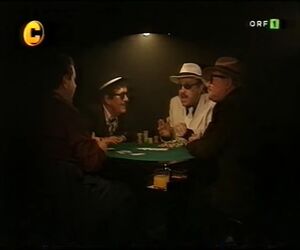 Don Dynamit and two henchmen gambling against a circus clown in one episode's flashback. 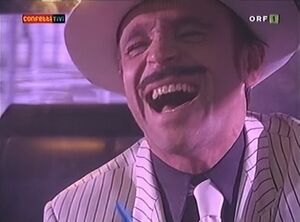