Get revenge on Professor Layton.
Save London from Clive with Layton.

At his time at the university, Don Paolo was in love with Layton's girlfriend named Claire. After working as a scientist, he was expelled from his position due to his unethical nature.

Wanting to find the treasure of the Reinhold family Layton was searching for, Don Paolo would become the main villain of Professor Layton and the Curious Village where his profile gives a rather unique insight into his personality as it notes that when not committing evil deeds Paolo is fond of listening to music. Furthermore, he disguised himself as Inspector Chelmey to frame Layton in a murder case with forged evidence.

In Professor Layton and the Diabolical Box, Don Paolo shows his skill of disguise by successfully managing to play the part of Flora - being able to fool many into believing he was her, according to the profile he was so good at this he was even able to mimic her walk. Disguised as Flora, he wanted to solve the mystery of Anthony Herzens Elysian Box he had stolen from Layton's mentor Dr Andrew Schrader.

It is revealed that Don Paolo's rivalry with Layton stems from the fact his love, Claire, was in a relationship with Layton - this embittered Paolo towards Layton and he swore revenge: An oath he seems to live by until he teams up with Layton in Professor Layton and the Unwound Future to solve the mystery of future London and stop Dimitri Allen. After furthermore helping to save London from Clive Dove, Don Paolo watches Layton's success from a rooftop and presumably flees afterwards.

Don Paolo considers himself Layton's arch-rival, a claim supported by the fact he is considered a criminal mastermind within his own setting and was a scientist of the highest nature. He is also a master of disguise.

Don Paolo has the admirable ability to disguise himself as absolutely everyone, even people much thinner or smaller than himself. He is furthermore able to completely copy their personality, voice and even the way they move, making it almost impossible to expose him.

Being a scientific genius, he is very talented at inventing and building all sorts of useful and dangerous contraptions, especially flying machines. These are often concealed, for example as umbrellas or cars. He is also an escape artist, being able to flee from the police at every single one of his appearances.

In the manga series Professor Layton and the Cheerful Mystery, where Don Paolo acts as the Big Bad, he is depicted as an incompetent On & Off villain and a Scapegoat, rather than an actual threat:

He appears in almost every story, often building machines like giant robots (which always halve a self-destruction button) to threaten Layton and Luke, however, in some cases he helps them, sometimes even to stop his own doings (For example after creating a killer robot or when he ate one of his own poisoned mushrooms and mutated, so that Luke had to find the antidote). In general, however, he doesn't redeem himself completely, like he does in the games.

A recurring joke is that Layton tends to forget about him. 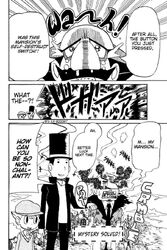 Retrieved from "https://villains.fandom.com/wiki/Don_Paolo?oldid=3411519"
Community content is available under CC-BY-SA unless otherwise noted.