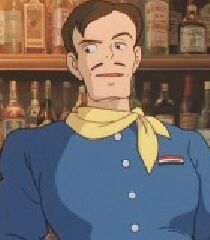 Donald Curtis (who goes by his last name) is the main antagonist of the Studio Ghibli film Porco Rosso. According to one of the pirates of the Mamma Aiuto Gang, Curtis is "the only one who can beat Porco" (the protagonist). Although he is an American, his English-language voice actor, Cary Elwes, is British.

Curtis is first seen at the Hotel Adriano of Madame Gina, and he is negotiating an employment contract with the Mamma Aiuto Gang.

When Porco flies off to Milan, Italy (though the Italians have a warrant out for his arrest), Curtis bothers him and tries to shoot him down (which he claims to have managed after Porco's engine breaks down and he crashes). Curtis also believes Porco is dead, but the latter had landed on an island.

Later, he goes off into Gina's secret garden to invite her to a glamorous life back in America, but she refuses as "life here is more complicated than in America".

After Porco lands at his island hideaway, the Air Pirates have infiltrated it. Curtis reveals himself and challenges Porco to a duel (with a deal that Curtis will pay off his airplane repairs if he loses to Porco, but will be married to Fio Piccolo if he beats him).

The next day, Porco and Curtis have a dogfight on their planes on a secluded island (as arranged by the air pirates). When Curtis realizes Porco's strategy, he begins to conserve his ammo. Porco merely avoids Curtis, baiting him into wasting bullets. Because Porco doesn't shoot at Curtis, the latter assumes the former's guns are jammed. Later, Porco and Curtis get tired and begin to fade. They cannot shoot each other because Porco's chaingun is jammed, and Curtis has run out of bullets. They throw debris at each other and land in the bay. So, they fist-fight instead (for Fio) despite being tired from the air combat. They go for several rounds. Despite getting many bumps and bruises, none of them give up. While they are fighting, Curtis tells Porco that Gina is in love with him. After they hit each other in the face, both pilots fall into the water. So, after Porco gets up (from hearing Gina calling him), he wins. After Porco asks Curtis to join him in drawing the Italian Air Force away from the others. Curtis agrees and notices that Porco's face has turned back (which the audience never sees)

Retrieved from "https://villains.fandom.com/wiki/Donald_Curtis?oldid=3750520"
Community content is available under CC-BY-SA unless otherwise noted.