Remove Harry Osborn from his position as CEO of OsCorp so that he can take over OsCorp for himself (succeeded, for a while).

Donald Menken is the secondary antagonist of the 2014 superhero drama film The Amazing Spider-Man 2.

He was portrayed by Colm Feore, who also portrayed Laufey in Thor, The Dollmaker in Gotham, Randall Flynn in Revolution, and André Linoge in Storm of a Century.

Donald Menken was Norman Osborn's personal assistant, until the day when he was ill, that he brought over Norman's son, Harry to see him, witnessing him becoming the new CEO of OsCorp. Unhappy at the idea of answering to Harry and desiring the position for himself he decided to conspire in order to have Harry removed.

The next day as Norman Osborn had passed away, Harry embarrasses the board, when a guard informed Harry that Peter Parker had came to visit him, Menken looked suspicious, and spied on him and Harry throwing rocks at a river. Planning to get rid of Harry, he kept Maxwell Dillon's accident in secret and later had him moved to Ravencroft Insitute to be experimented on by insane doctor Ashley Kafka so they can discover how he became the way he is.

The next day, at Ravencroft Institute, Menken had a recording of Electro's plans to put under Harry's name to frame him, which succeeds by firing him, thus usurping his position for himself. He then confronts Harry and tries to have him forcibly removed, however Harry agrees to leave willingly. Menken then mocks him, telling him that he'll die slowly and painfully and unlike his father no one will care about this.

However, he is soon confronted by the combined efforts of Harry and Electro. Menken tries to confront them only for Electro to kill him. Electro then revives him and Harry holds him at gunpoint. He then forces Menken to show Harry the secrets Norman had made, and forced him to save Harry's life by injecting him with the experimental mutant spider venom, which reacted badly with Harry's DNA, granting him superhuman powers but destroying his mind. As he saw Harry mutating, he cowardly ran away and activated an alarm throughout the tower.

A deleted scene shows Donald's fate when Harry (now as the Green Goblin) confronts him. Using his glider, Harry flies Menken up to the top of the stairway, telling him that the fall is 'fast and steep'. Without hesitation, Harry laughs maniacally as he drops Menken, who then falls screaming to his death below. 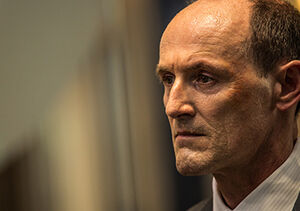