White Bishop of the Hellfire Club

Leader of the Reavers

Kill as many mutants as he can.

Donald Pierce is the White Bishop of the Hellfire Club and the leader of the Reavers, a group of cybernetic mutants. He is an enemy of X-Men, mostly of Wolverine and a supervillain in the X-Men comics.

An industrialist, Donald Pierce first appeared as a high-ranking member of the Hellfire Club Inner Circle, where he held the position of White Bishop, during that organization's first direct encounter with the X-Men. During this conflict, he battled Wolverine, Nightcrawler, and Colossus, and when Wolverine nearly severed his arm, it was discovered that he was a cyborg. The Hellfire Club Inner Circle was eventually defeated and Donald Pierce's whereabouts were unknown for several years.

Pierce later appeared with Lady Deathstrike and three other cybernetically-enhanced mercenaries (Cole, Macon, and Reese) who had been fatally wounded by Wolverine during the Hellfire's first skirmish with the X-Men. All five characters were consumed by their desire for revenge against the X-Men, and Wolverine in particular. To that end Pierce created an army of cyborgs out of low-life thugs and a few mercenaries. He named his army "The Reavers".

After rescuing their captive Tyger Tiger from the Reavers, the X-Men expelled the cyborgs from their Australian Outback headquarters, and appropriated the base for themselves (though Pierce was not present during this encounter, and was not yet revealed as the Reavers' creator). The Reavers set out to defeat the X-Men, mounting a return to their old headquarters, this time with Pierce and Deathstrike present, but after the X-Men had escaped through the Siege Perilous they only managed to capture Wolverine who they tortured and crucified, Jubilee saved him from the cross. At one point Pierce created two super intelligent sentient androids (Elsie Dee and Albert) to kill Wolverine, but they developed ethics and turned on Pierce and abandoned the Reavers.

A few years later, a member of the Upstarts, Trevor Fitzroy, sent Sentinels to destroy the Reavers because they were a threat to mutants and Pierce (as the Hellfire Club's former White King) was worth a lot of points in the deadly game the Upstarts played. Of the Reavers, only Lady Deathstrike and Cylla escaped the Sentinels and it appeared that Pierce had been destroyed. The rest of the Reavers were completely wiped out. Despite his apparent death, Pierce resurfaced to trouble the X-men once again. He recently started an anti-mutant hate group and enlisted several members. He revealed a plot to take militant terrorist actions against mutants and was thwarted by the X-Men. He was beaten by Wolverine in hand-to-hand combat even though he is several times stronger than Logan. It is revealed that little to no human tissue remains in Donald, which shows how he was able to survive the slaughter in Australia.

Pierce recently tried to take over Sebastian Shaw's new Hellfire Club, launching an attack and slashing Shaw's chest. Though Shaw was left critically injured and later needed to be hospitalized, he was able to punch off Pierce's head.

Pierce resurfaced, impersonating Cyclops and gathering a team of Young X-Men in order to assassinate Sunspot, the new Black King of the Hellfire Club. He was defeated by the combined forces of the Young X-Men and the New Mutants and imprisoned by the X-Men. He befriended Dust whom he promised to heal from her deadly cell degradation if she would free him from his imprisonment. The plot however failed, and Pierce remained a prisoner of the X-Men. It was later revealed that Pierce had been in contact with Bastion, keeping him informed of developments in the X-Men's headquarters on Utopia.

By order of Bastion, Pierce blew up the Black Birds, and was killed by Cyclops.

Donald Pierce appears in the Dark Phoenix saga in the X-Men cartoon. He is depicted as much younger than his comics counterpart.

He is shown as member of Hellfire Club attempting to steal the Phoenix Force from Jean Grey. Instead of a mutant—hating cyborg, he is depicted as a mutant capable of emitting energy blasts. 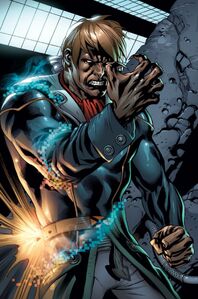 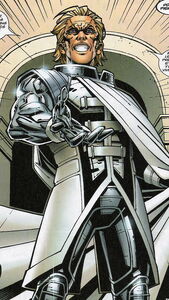 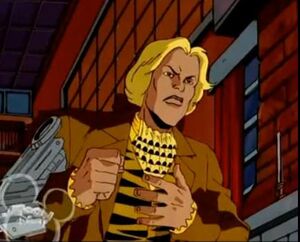