45th President of the United States

Build a wall around Mexico.

Make out with Meg Griffin.
Defeat Joe Biden (all failed).

Donald John Trump Sr. is a recurring antagonist in the FOX animated sitcom, Family Guy, appearing in both of the two-part special episodes "Hefty Shades of Gray" and "Trump Guy", as well as appearing in other one-shot episodes. He is a fictionalized version of the 45th President of the United States of America, beginning his term in 2016.

He is voiced by Josh Robert Thompson.

In "Hefty Shades of Gray", Peter Griffin started working as a reporter for Quahog 5 News and used his platform to spread lies and strong opinions, most of which were rather bigoted and damaging to society. Eventually, he got fired for doing this but shortly after losing his job, he got a phone call from President Trump, who said that he saw everything he did and loved it all, asking if he would like to become a panelist for him and work as his secretary. Peter happily obliged, much to the anger of Lois, who reacted by ripping his head off.

In a preview for the following episode, a scene depicted Ivanka Trump introducing Meg to her father, who greeted Meg and then gave out a previous comment on her "rack", which Meg assumed was directed at her before Trump said that he was actually talking to his daughter. This exchange of dialogue did not actually happen in the following episode.

In "Trump Guy", Peter had already gone to Washington D.C. and begun his career, working as Donald Trump's secretary as the latter gave him a tour of the white house. Donald Trump's first order of business was to get Peter to check the doorknobs of every door in the White House for static electricity. Peter checked one and got himself shocked. Trump thanked him with a handshake, which only caused himself to get shocked as well, leading to his hair comically frizzing out.

Ivanka Trump introduced Meg to Donald Trump and thanked the latter for giving her plastic surgery in her teens. Meg happily greeted Donald Trump and happily told him about how much she loved him and everything he did. As she did this, Trump would completely ignore her and slowly move his hand down to her crotch until he finally grabbed her by the pussy. Meg rightfully freaked out over this but Trump calmly told her that there was no reason to complain, as every president since Washington had done the same thing.

Meg tried to tell her family about how Trump assaulted her but nobody believed her.

Donald Trump would later try to rape Meg on the couch, while Mike Pence watched in amusement. Meg begged him to stop but he ignored her and proceeded to lick her face inappropriately until her family walked in and saw what he was doing and put a stop to it. Peter Griffin called out Donald Trump on the way he was behaving and Trump told him that the way he was acting was no different than how he acts. Trump told Peter that he was extremely rude and insulting to everything he saw and brought up Peter's previous shot at Bob's Burgers as an example. Trump later added that Bob's Burgers was his favorite animated show. Peter turns to the camera and assures the audience that if this is coming from the mouth of the president, then Emmy voters should "vote their conscience". Trump goes on to ask the question, "If Peter Griffin gets to be a jerk all the time, then why can't Donald Trump?" Peter finds himself bewildered by Trump's words and finds himself agreeing with him for once as this is "Not the dumbest thing he's ever said." Trump asks if this means that he and Peter are on good terms but Peter still says "no" and quits his job and gets the whole family to hate him too.

Donald Trump goes to board his private jet with his wife, who refuses to let him hold her hand until he is approached by Peter, who rehashes the fight from before and says that there's a difference between the two of them and the amounts of impact they leave on society, starting up a fourth-wall-breaking dispute between the two of them. Peter argues that because he's a cartoon, people can turn him off, whenever they please but because Trump is the president, they can't ignore him. Trump argues back that people learn a bunch of offensive jokes from his TV show. Peter takes things a step too far, when he calls Trump "cash poor", offending the latter. Donald Trump gets so mad that he resorts to physical violence. Understandably angered, Peter fights back against the president, starting a huge chicken-style fight between the two of them.

Peter and Trump's huge fight brings them all throughout Washington D.C., leading them through the White House, the Washington monument, and the Smithsonian National Air and Space Museum, before the two of them start plummeting off the Washington monument to their imminent dooms, only to be saved by Justin Trudeau. After this, the two stop fighting and decide to leave each other alone.

Peter goes home with his family and they all discuss how happy they are to be out of Washington and away from the president. They then proceed to end the episode by breaking the fourth wall to tell the audience about all of the horrible things Donald Trump has done as president.

Donald Trump is an obese, middle-aged Caucasian male with a lumpy, sagging face and unnaturally tiny hands. He has a bunch of tangerine orange spraypaint on his face. He has a long, slick, blond mullet that sticks out far in front of his face. He wears a navy blue suit and matching pants, a white collared shirt, a red tie, and black shoes. He also has a pin of the American flag on his suit.

Donald Trump behaves like a stereotypical political strawman of Donald Trump archetype. He is an incompetent, bumbling, idiot who knows nothing about being president and fails horribly at his job. He is known for being rude, offensive, disrespectful and even flat out hateful to various people, ethnic groups, countries, and a slew of other subjects. Donald Trump is perverted, misogynistic and is known to sexually abuse women by shamelessly grabbing them by their vaginas. He is very egotistical and thinks that because he's the president, everyone should respect him, failing to understand it's a free country. Trump's wealth is somewhat of a trigger for him and if someone dares to call him poor, he quickly spirals into a violent and murderous fury. 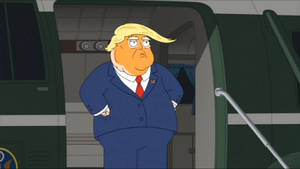 Donald Trump's debut from a deleted scene in "Hefty Shades of Gray". 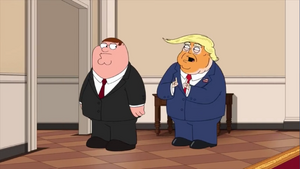 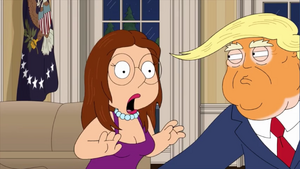 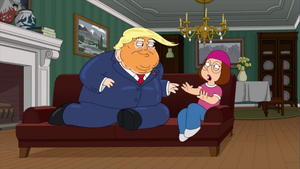 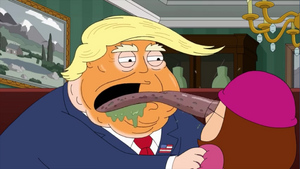 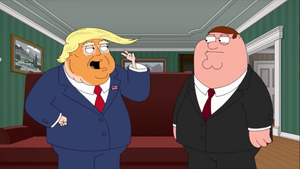 Trump claims to be better than Peter. 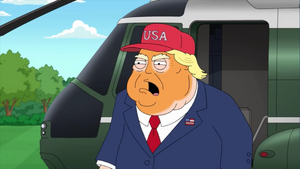 Trump gets triggered when Peter calls him "cash poor". 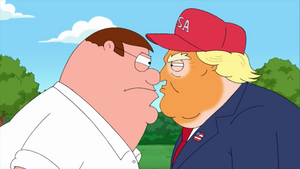 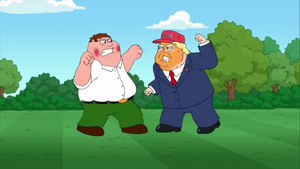 Peter fighting Trump like a Ernie the Giant Chicken. 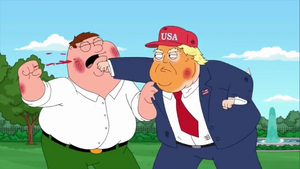 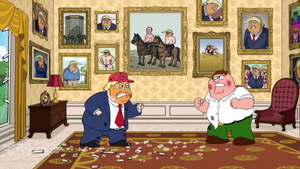 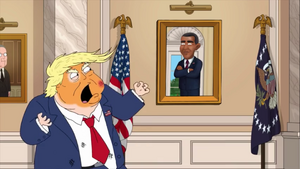 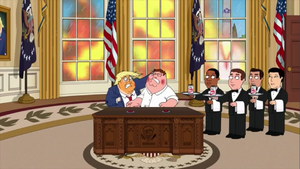 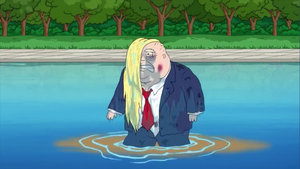 Donald Trump without his orange makeup. 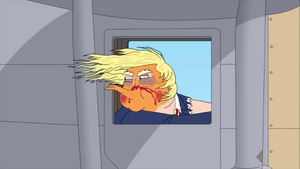 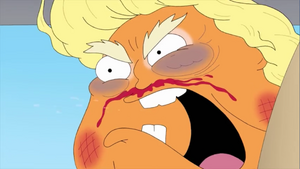 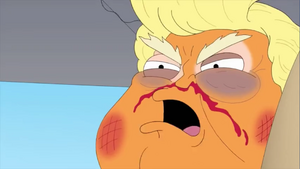 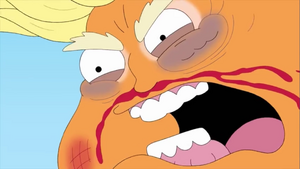 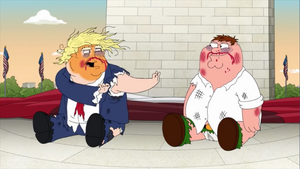