"45th President" of the United States

Lying to the press.
Drinking coffee
Tweeting
Watching Fox and Friends
Attacking others who disagree with him

become President of the United States (all succeeded).
Build a Wall between America and Mexico and have Mexico pay for it.
Create a Travel Ban to prevent Immigration into America (failed).
Take control over Zimbabwe (failed).
Go to war with Mexico, Australia and Germany (all failed).
Fire Robert Mueller from finding any obstruction of justice within the ongoing investigation (all failed).
Rule the world (will likely also fail).

Donald Trump is an ongoing parody of Donald Trump on the political comedy series Saturday Night Live. He is portrayed as a satire of the real Donald Trump and has appeared in several numerous SNL sketches, both before and after becoming president.

Donald Trump is currently portrayed by Alec Baldwin, who won a Critics' Choice Award for the role in 2016. Baldwin also played Larry Quinn, Nick Kudrow and Mark Cordell, and who voiced Makunga and Dennis.

This incarnation of Donald Trump appears to be very hypocritical, as he describes Hillary in ways that describe himself, saying that he doesn't like her because "her face is all orange, except around the eyes." Although, his personality shifts in each episode. In some, he appears to want Hillary in jail, but in a later one, he said she was innocent of all crimes because he didn't want to take the time out of his day to prosecute her, implying that he is very lazy. Trump doesn't ever take his job as President seriously or ever uses his presidential powers in anyway to help the country since he's more interested in expanding on his money, his hotels, his number of supporters, The Apprentice and writing ridiculous things on Twitter. In addition to Trump often throwing temper tantrums at people who denounce him by screaming that they're being offensive, Trump himself highly offends and discriminates other people especially in terms of their religion or background ethnicity.

Donald Trump is also appears to be culturally insensitive, best seen during his interview with "Lester Holt" in which he forgot Holt's name and called him random black people, such as "O.J.", "Denzel", etc. He also appears to be somewhat manipulative, despite his low intelligence, as he was able to easily convince "Sean Spicer" that he wasn't going to replace him with "Sarah Huckabee Sanders," before molesting him. He also enjoys spending his free time tweeting, stalking Hillary Clinton, and making prank phone-calls, implying he is very child-like and mischievous.

Donald Trump's most significant traits include having a sloppy attitude and cowardice. In the sketch "Donald Trump vs. Hillary Clinton Debate Cold Open", he talked for 2 minutes gloating about himself but Lester Holt called him back stating this is a 90-minute debate. In response, Trump lies he can't continue because Obama and Hillary broke his microphone. In "Oval Office Cold Open", when Steve Bannon eggs Trump to call Zimbabwe and bully their president Mugabe by intimidating him, Mugabe threatens to rip out Trump's spine, decapitate him and use his skull for a cup.

Trump just silently shivers in fear mouth agape as Mugabe lashes out at him for being a "little white bitch" then demands no more phone calls. In "Alien Attack Cold Open", when aliens were attacking the earth and easily, quickly stealing earth away from the humans Trump did nothing about it and just kept gloating that he's President. Of course then the aliens arrive right next to Trump with his Army general and the aliens' commander tells Trump, "Take me to your leader!". Trump thinks for a moment then declares that his general is the President.

Donald Trump also demonstrates poor common sense, such as by hiring meth kingpin Walter White from AMC's Breaking Bad to be the new head of the DEA or how his phone call to Robert Mugabe. When Trump called Mugabe just to bully the latter, the latter responds by threatening to rip his head and spine off. Trump fails to comprehend that Mugabe has a lackluster military while his own military, the U.S. Armed Forces, is far more powerful and capable should war break out between the United States and Zimbabwe.

This version of Donald Trump commits numerous villainous acts in the sitcom that include (but are not limited to): 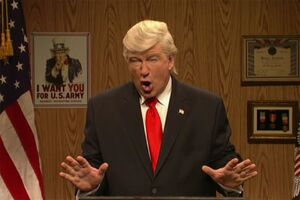 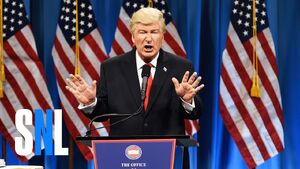 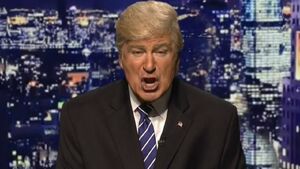 "Donald Trump" and "Kellyanne Conway" tweeting during the security briefing 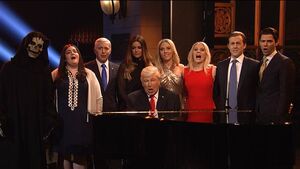 "Donald Trump" and his cabinet
Add a photo to this gallery 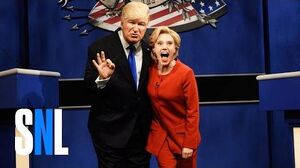 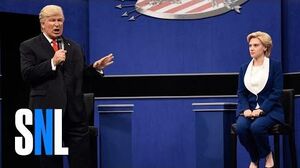 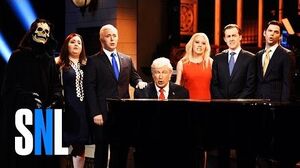 Retrieved from "https://villains.fandom.com/wiki/Donald_Trump_(SNL)?oldid=2506687"
Community content is available under CC-BY-SA unless otherwise noted.