Head of the Robot Mafia

Robotic Mobster
Donbot is one of the recurring antagonists in Futurama. He is a round greenish-gray robot with rings around each of his fingers. He almost always has a dark brown hat, a dark brown suit jacket, and occasionally a cane. He is the head of the Robot Mafia, joined by his subordinates Joey Mousepad and Clamps. His wife, Fanny, had an affair with Bender and his daughter, Bella, had sex with Bender at her sister's wedding.

The Donbot's personality is basically the stereotypical criminal mob boss personality, which is basically defined as calm, calculating, and intelligent. However, it also comes with arrogance, greed, selfishness, and a demanding hunger for power. The Donbot is also a murderous robot who would murder anyone who would not pay money to him. However, he is also shown to be forgetful about people a lot as he would try to kill them in one scenario and sell them something in another. He is also a manipulative person as he took over a casino and fooled the Martian police into doing his orders.

The Donbot hired Bender Bending Rodríguez to work as a goon to the Robot Mafia and steal a shipment of Zuban cigars, attempted to kill Flexo with an unbendable girder after Bender, disguised as Flexo, continued to flash his filthy scab money, was o ne of the FART, which shows that he is a parent, attended the Big Robot Party, and was a member of the League of Robots.

Fanny, his wife, cheated on him with Bender after Bender met her in the Gearotica Theatre. When the Robot Mafia became aware of the affair, they shot them and buried them a few times as a warning. However, the Donbot and Fanny had already gotten back together by the legalization of Proposition ∞. He later had Clamps try to kill Bender again after Bender had testified concerning Donbot's assault on Calculon.

In the Donbot's final appearance, he was seen being taken away by the police, implying that he finally had to face punishment for his actions.

Donbot is an unlockable character available during Act 2 of the Wise Bots event. Donbot is available in the store for 6000 Nixonbucks and can be fully unlocked with Pizza. 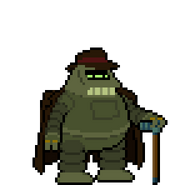 Donbot and his henchmen shooting Bender and Fanny for infidelity. 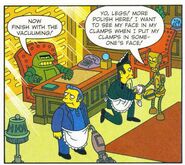