Dong Bai (Chinese: 董白), is the granddaughter of Dong Zhuo and a minor antagonist in the Romance of the Three Kingdoms.

Dong Bai is a sadistic girl with a violent temper, so much so that even like her grandfather. When Dong Zhuo moved to Chang'an, Dong Bai was less than fifteen years old. While she had not married (adult ceremony) and was named Yu Yangjun.

Dong Bai took the chariot, let the Tudor, Zhonglang, and the thorns in Yucheng guide him. When he arrived at the altar, Dong Bai's cousin Dong Wei was the messenger and was awarded to Yin.

After Dong Zhuo's death, his mother, father, wife, children, and siblings were all wiped out.

Cruel and selfish that much like her grandfather, Dong Bai has no trouble being snide to those below her station. She is only sweet and cheerful to Dong Zhuo. After her grandfather's death, she was becomes a more sadistic towards Lu Bu and Zhang Liao for their treachery. However, despite initially being haughty and thinking of him as nothing more than a simple pawn, she is also develops a fondness for Hua Xiong in his simple-mindedness. Despite her sadistic tendencies, Dong Bai was shows a sympathetic side.

In Dynasty Warriors game series, Dong Bai outlives her grandfather's demise and constantly dogs her grandfather's murderer to avenge him, first launching a sneak attack at Yuan Shao's main camp while Lu Bu is subjugating Zhang Yan and his bandits. However, she was attacks him once again near the port of Ye when he fight against Cao Cao for Yan Province. Dong Bai's final appearance has her attempt to obstruct Lu Bu's alliance with Yuan Shu to counter the battle against Cao Cao and Liu Bei. 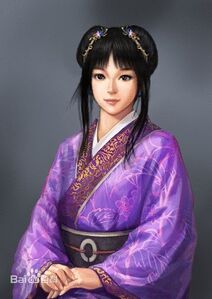 Dong Bai in Romance of the Three Kingdoms XI. 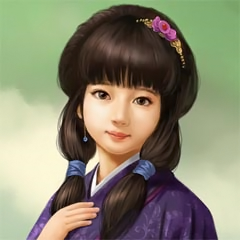 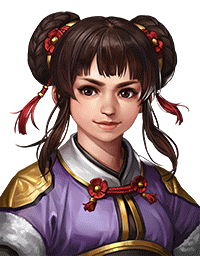 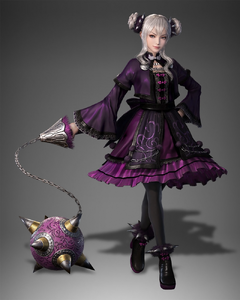 Dong Bai in Dynasty Warriors 9.
Add a photo to this gallery

Retrieved from "https://villains.fandom.com/wiki/Dong_Bai?oldid=3701793"
Community content is available under CC-BY-SA unless otherwise noted.