Brutally murder Kyun Yoon.
Make his son Jin Seon to be completely like him (all failed).
Kill Manny (succeeded).

Dongsoo Seon (In Korean: 선우 동수, Seonwoo Dongsoo) is the main antagonist of the widely known Manhwa Webtoon comic Naver/LINE Horror series Bastard and is the father of the series main protagonist Jin Seon. Dongsoo Seon is a sadistic serial killer who gains thrill seeking pleasure in his disturbingly violent actions in killing mainly women in some of the most brutal ways possible for over a decade and a half, even getting his son involved in his torturous kills by influencing and having him as his accomplice. However, despite his psychological influence over Jin, as his son gets into his teenage years, he develops feelings for a girl named Kyun Yoon, and as Dongsoo sees her as a target prey for his nightmarish slaughter, it raises the tension between the relationship of a father and son, with Jin doing whatever he can in keeping Kyun safe from him.

Dongsoo Seon is a middle aged man who has an athletic, fairly and tall build (Which is over six feet) with cedar brown hair. Another appearance that can labeled for Dongsoo, is when he shows his more psychopathic look, having a much more deranged appearance from his behavior stance, with eyes wide open, teeth showing, grinning and sometimes hands in a creepy type of bent posture. Some of Dongsoos expressions can be a mix of being in between in his normal and murderous look, that gives an unpredictable impression on rather he's going to be aggressive or not. His clothings are suits, long sleeve button shirt and a coat.

On an acting surface, Dongsoo Seon can be a charming charismatic sophisticated person, who can pull a friendly approach in behavior towards others, showing high qualities of an aspiring central executive officer (CEO) in collaborative discussions with his employees, is very courteous in helping out others in need with a lot of them being the elderly and offers basic guidance on how to be a role model to school students expressing the importance of kindness, service and love. However underneath his disguise he is a psychopathic thrill-seeking serial killer who laughs out loud at things that lead into an embarrassing catastrophe of grave danger that he can take advantage of or him cutting up women into pieces for the sake and desire of being bad.

Dongsoo's appeal has a meticulous preference on who he kills, he's more of the kind of guy who likes to chop up the female who don't look so tough, with the certain details being how he likes their facial physic being ones with sweet eyes and a cute figure. Dongsoo can also be very obsessive in giving into his bloodthirsty tendencies, especially with Kyun Yoon where when the moment he first saw her, he couldn't stop thinking on how he was going to get his hands on her, for a long period of time and when he had a greater chance in catching her, he was so happy about it all that he gave all his employees a day off. He is not only a business man to his own company but to illegal organ sales that involved organ traffickers though his views on the deals were not for the money but for his own sick belief of sending murdered girls to their lives that mean so much to his vile cravings. As how many would interpret Dongsoo being calculating in his efforts of marketing business strategy, the same can be said in how he makes his gory murders are left not noticed as he picks specific dates on when he will target his next or prey for his thrill-seeking feast in his mind.

It could also be noted that Dongsoo may have some kind of deviant warped perspective on his desire to destroy what is beautiful, making it very exciting for him to do. He is very observant into paying attention to people at what their doing, to the point where he'll stealthy stalk them to get any information he needs to exploit their weaknesses. In many ways he is an opportunist, as shown when trying to get information on where Kyun was in giving a kind approach to an elderly man who knew her whereabouts, which in return fits into his false admiral image of the public thinking he's friendly to be around. He has also this method in being seductive to a woman, where his charisma charms her enough for him to seek out the Intel he needs in hunting his target. Dongsoo takes delight over seeing his enemies in horrible pain and mutilation, as when he sliced off other murderers throats talking about the beauty of brutally murdering women and after he killed Mannys parents and got Manny legs destroyed he smiled seeing him in a handicapped state giving him joy over the teenagers loss of ligaments.

Dongsoo's faux affably evil traits are shown when he fools and manipulates others by making them think he has some form of sincerity in feeling sorry when he subverts that around by going one eighty on those false remorseful claims. One effective example is how he fooled Manny into making him think he was sorry for his parents being killed, telling him in a sincere sounding and appearing over tone that he didn't kill them, by flipping his statement around in saying he wasn't while laughing about his successful lie on Manny. These types of manipulation tactics are also used in Dongsoo's favor in causing characters like Jin, Manny and Faye Kim to lose self control of themselves as an opportunity to get back at them and getting them set up to be a part of his manipulative schemes and is gets exhilarated when seeing them lose their emotionally preservation. One of his most heinous qualities to his personality is how he is a corrupting influence on Jin when he was 2 years old, making his son at the time think that killing people is all fun and games and got his son to like it for a while.

This is a serious disaguard on the trouble he was getting his son into, as when raising him to be exploitive serial murderer could bring Jin in being caught, but in Dongsoos mind as long as they did it carefully they would be overall Karmic Houdini, and given how successful he was in making sure Jin helped him for over 15 years of serial killing his victims, his ego was boosted immensely because of that. Even though Dongsoo is mostly defensive when others attack him, as long as Jin would give into his traits of his father, he was okay with him hitting or killing him in a brutal way, and when being forced into a beating situation by Manny he'll use a endurance and a humorous survival mechanism in withstanding his torturer hitting him while laughing at his own pain.

He is symbolic in the length of what he represents to his son, a father who is of the concept beauty then destruction with his son being internally challenge in not resorting to that, the simple description for this is how he represents Jin Seons inner demons showing little to no hesitation in giving in when the opportunity is given meaning Dongsoo knows that unlike his son who has a chance in not being like him, he doesn't and accepts who he is. The symbology can extend to what Dongsoo represents in real life, a villain who is very how a real life one would be, and while many wouldn't, others may go the extent of his thrill-seeking actions which serves as an example of how twisted a persons heart can be when seeking exciting pleasure and at the starting point of it all, giving into the violent tendency where there is no going back resulting in who they would soon become later on with Dongsoo being that driving force example in the series. He takes some pleasure in some drinking and smoking, as he's seen to be a bit exhausted from the fun he was having with his brother.

A bit of a head scratcher on Dongsoos character is when he was about to commit suicide avoiding the police from punishing him for his crimes, where he goes into a deep state of a imagination of his wife having a conversation with him about how their son has grown and why he can't change who Jin wants to be. Amazingly despite how heinous Dongsoo Seon is, he has shown to care for his family or at least to some extent he cares for them, in refusing to kill his wife for pushing Jin off a building, stating he couldn't bring himself to do it, killed off Manny due to him bullying and trying to kill Jin and told his son how to save Kyun Yoons life when not giving into his violent desire to kill traits. The relationship between him and his wife can best be said that she was a very special woman to be spared in his eyes as he saw her as a way to have a legitimate loving family and even though that didn't last long he still deep down loved her.

However do not think Dongsoo draws a significant further line from there, as even the mercenary Mandeuk has stated that he is someone who shows no kind of hesitation in killing anyone else, meaning that no one else is really safe from his malicious intent that is not part of his exclusive main family, except for Kyun Yoon who was only spared because of Jin Seon. Although how he sees Kyun may have more deeper psychological views despite not having much of a personal relationship, post the separation of his wife going to a psych ward, Dongsoos serial murders seem to give evidence to show a case of obsession over the love of his former wife, as when his monologues about women having a beautiful demise through love, meaning that part of the reason why he focuses on brutally ripping women to shreds that resemble the appearance of his wife is because of how he felt betrayed over his wife nearly killing Jin in preventing their son to be a monster like him. Further noting on how Dongsoo sees Kyun is the fear that she maybe like his wife in wanting to do the same thing to Jin in killing him, making Dongsoo protective of his son in manner of being willing to kill Kyun.

Dongsoo getting ready to chop a woman into pieces 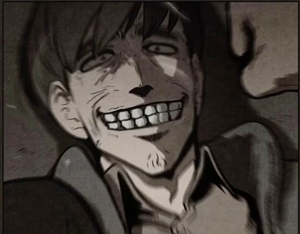 Dongsoo smiling at Manny going to punch him 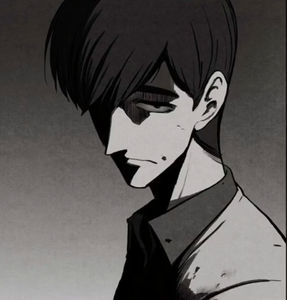 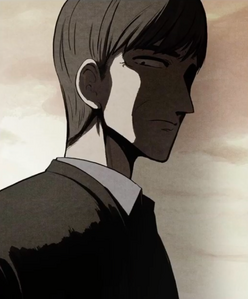 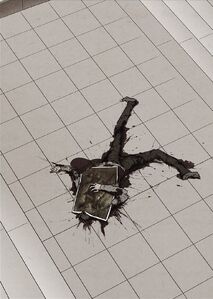 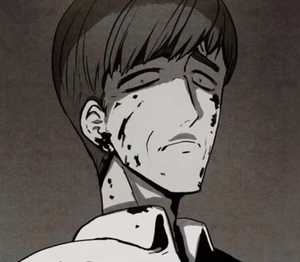 Dongsoo looking down at a scared Jin 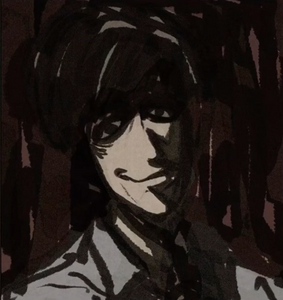 Jins dad is the devil