DK Jr. is the son of the original Donkey Kong, Cranky Kong, and the father of the modern Donkey Kong.

Donkey Kong teams up with his father to kidnap Pauline and defeat Mario. DK Jr. tries to kill Mario by activating and deactivating the switches, and throwing poisonous mushrooms at him. And also, he can harm Mario if Mario touches him somehow. In Stage 9-4, Mario eventually defeats him by locking him in a cage, but he managed to escape, as seen in the ending of the game. 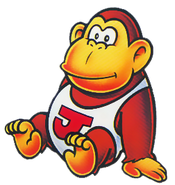