Note: This article is about Donna Troy as seen in the "New 52 Wonder Woman" comics, the future Troia version seen in "DC Rebirth's Titans" comics, and the character while infected by The Batman Who Laughs in the "Year of the Villain" saga. Her usual, heroic self couldn't be any more different.

Donna Troy is a character in DC Comics. Usually a hero, in various arcs she has been portrayed as a villain. The New 52 relaunch initially introduced her as a creation of the evil sorceress Derinoe, made to supplant Wonder Woman. A supremacist and genocidal tyrant, this version of Donna subsequently reforms, though her mass-murder history is retconned by DC Rebirth as an illusion.

A future version of Donna, going by Troia, is introduced in DC Rebirth Titans. Seeking to eliminate her friends to eliminate any sense of less she's felt, this counterpart is defeated by the present-day Donna Troy.

Donna Troy is later infected by The Batman Who Laughs, turning into a twisted, dark, bloodthirsty version of herself - Deathbringer.

Donna Troy is created as a weapon by the sorceress Derinoe out of rage and hatred in order to destroy Wonder Woman. She is introduced as a "saviour" to the Amazons' Council, who are manipulated by Derinoe into believing Diana has abandoned them for the outside world, and Donna is subsequently declared Queen of Themyscira by them.

Troy proceeds to rally the Amazons, turn them against the "absentee" Diana and calls for them to "take back" their island by killing all the Sons of Themyscira, the Amazons' abandoned sons and the only male residents. Diana, witnessing in horror, and Donna then clash, escalating into a duel, before they're quickly halted. Having succeeded in making the Amazons lose faith in Diana, Troy then leads 20 of them into murdering every Son of Themyscira.[4] Following the massacare, she is confronted by a returned Wonder Woman. After a sustained duel in which she holds initially holds her own against Diana, Troy is ultimately defeated. Diana subsequently reclaims the throne and uses her lasso of truth to show remove Derinoe's influence on Donna, who is then imprisoned for her coup and genocide.[2]

Remorseful over her horrific crimes, Troy is unable to see herself as anything but a monster. However, she is freed by Strife, and goes on a soul-searching journey of redemption, in the process befriending a woman named Violet - only for her to be killed by a thug. A grieving Donna, comforted by Diana, is then killed by Aegeus. However, she is then resurrected by Zeus as the Fate of the Gods.[5]

A future, 1400 year-old version of Donna Troy (whose genocide is retconned as a false memory of Diana by DC Rebirth), named Troia, time travels to the past to confront her former teammates, The Titans. The "traitor" Psimon referred to, she is unleashed by her former nemesis H.I.V.E. using a pan-dimensional gateway. Over the course of several years she had been manipulating her former enemies Psimon, Mister Twister and The Key to get her through to the present by greatly augmenting their powers and promising these followers ("avatars") more.[6]

Mister Twister had been thwarted in his attempt by the then-Teen Titans.[7] Her scheme with The Key, years later, involved forcing Diana to reveal the truth: that Donna was created as a weapon to destroy Diana, who gave her false memories so she could live a "stable life" (another DC Rebirth retcon). Hoping to draw power off Donna's anguish over the reveal to free herself to enter the present, it ultimately wasn't enough.[8] Troia then had Psimon and HIVE steal Karen/Bumblebee's memories, luring Mal and Gnark to be corrupted with darkness and bending them to her will as her avatars.[6][9] During her avatars' battle with the Titans, the corrupted Gnark kills the injured Wally (who is subsequently resurrected by his cousin), which provides enough traumatic psionic energy from Donna and the Titans to free Troia.[10]

Unable to handle the losses she incurs during her lengthy lifespan (the deaths and struggles of all the Titans, her only friends), Troia was driven to a murderous path, killing both villains and heroes alike - with her victims including Diana, fulfilling the purpose for which she was created, and an elderly Bumblebee (for "leaving" her alone). Fully embracing darkness, she "reshaped" the universe by killing the likes of Darkseid and Neron, feeding on power, toppling "empires" and burning down the world - so she can never experience pain again. She now seeks to kill the Titans in order to save her having to ever feel grief, by never having anything to lose, and so not delaying her dark and murderous destiny by 80 years.[3]

Revealing her history to the present-day Donna Troy and mocking her former friends, not least by revealing their grim fates, she beckons her younger self to join her, stating her dark path is inevitable and what she was made to follow. However, Donna rejects Troia, and following an initial struggle in which Troia single-handedly takes on the Titans, Donna defeats her and sends her back to her timeline.[3][6]

After learning the truth about her life from Diana, encountering Troia, being imprisoned by the Justice League for this possible future, and their former mentors forcefully disbanding the Titans, Donna is withdrawn and driven to alcoholism. In spite of this, and the tragedies that befall some of her friends, she recovers and steps up as the leader of Dick's new Titans.[11]

However, she ends up targeted by The Batman Who Laughs, who infects her with one of his dark matter batarangs. Transformed into a twisted, dark version herself that lets go of her morals and accepts the darkness she was created with, she battles against initially Batman and Superman, to free her master, and later Lex Luthor.[12][13][14]

Donna Troy possesses the same, superhuman abilities of any Amazon, and like all Amazons is highly trained in different fighting styles and martial arts. She is also proficient in the use of swords, shields and knives. However, with Derinoe creating her to kill Wonder Woman, Troy's strength and skill surpassed most Amazons, being able to go toe-to-toe with Diana. Additionally, she has the unique ability of regeneration: when Wonder Woman cut her arm off, Troy was able to simply rejoin it. She was also an able leader, gaining her own followers after usurping Diana and playing on their emotions to lead them into committing genocide against the men on Themyscira. As the Fate, this Donna gained the ability to view anyone's future (precognition).

Troia possessed the same powers as her prime, present-day self, but her millennium of additional experience instilled a significant advantage, including a deep insight into her former teammates' strengths and weaknesses. She can additionally (even from beyond their dimension/time) enslave individuals, by corrupting them with darkness, and greatly augment her followers' powers. She also has the ability to "feed on" power, particularly psionic energy, which she used to open an inter-dimensional portal. She is also a skilled manipulator, and proficient in the use of an energy sword. These skills and powers enabled Troia alone to best several of her former teammates simultaneously and back-to-back.

Initially in the New 52, Troy is hateful, malicious and bloodthirsty, created by Derinoe to be such a "weapon", with her usurping Diana, riling the Amazons up with her misandry and committing mass murder against the Amazons' abandoned sons to "cleanse" Themyscira. Branding those males "parasites" and "vermin", Troy had no regret for her deeds and saw death as being "what they deserved", relishing being "ruthless" and "merciless". She was also very arrogant, thinking of herself as "perfect" and "undefeatable". Her hatred for Diana was so deep that she was characterised by an obsession with defeating and killing her that invoked a fiery rage. However, upon Derinoe's influence being removed by Diana via the Lasso of Truth, Donna becomes more measured and empathetic, with remorse for her actions.

Troia is utterly unhinged after over a thousand years of loneliness and loss, with all her affection for her former teammates (including her former love interests Roy Harper and Wally West) completely gone. Having disowned her sense of morality and resorted to murder after years of being alone and bitter over the grief she suffered, her victims including her own friends, she has since become prejudicial towards humans, "earthly attachments", and genocidal - all of which is just like how she initially was in the New 52. She now sees herself as the "weapon" Derinoe made her as, just "playing human for a while", and revelled in claiming "trophies", killing and gaining power. The fact that she initiated an entire plot to travel back in time simply to accelerate all her horrific deeds, which she had already committed, shows just how obsessive and deranged she had become. She is also intolerant of failure, taking her anger out on The Key when he was unable to get enough energy to allow her to enter the present, and is impatient, instructing her avatars to stand down when they were unable to quickly take down the Titans - instead seeking to do so herself.

Infected by The Batman Who Laughs, Deathbringer has fully embraced her darkest impulses and given up on bringing peace, instead striving for slaughter, bringing her close to her original self and Troia. 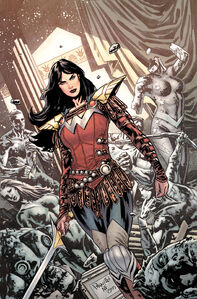 Donna Troy in the New 52 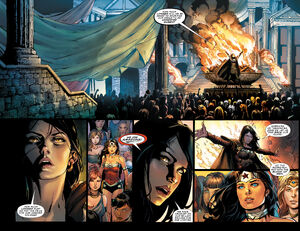 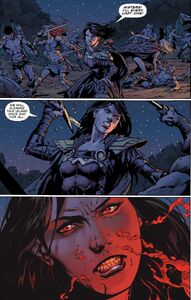 Troy commits genocide against the Sons of Themyscira 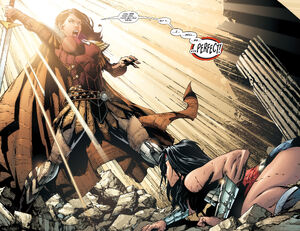 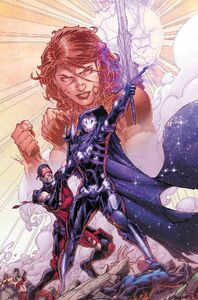 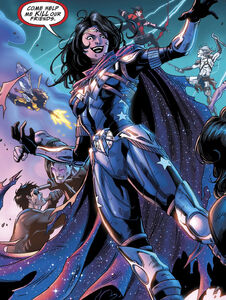 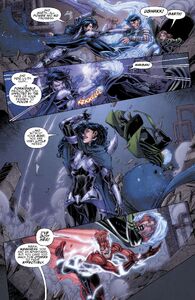 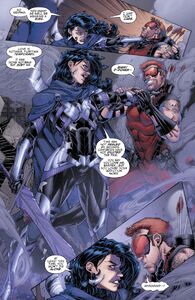 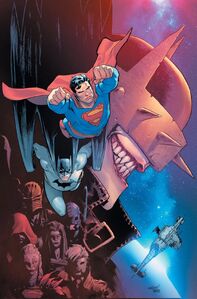 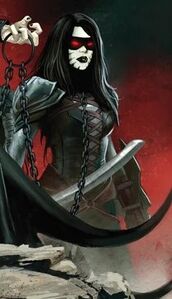 Deathbringer serving The Batman Who Laughs 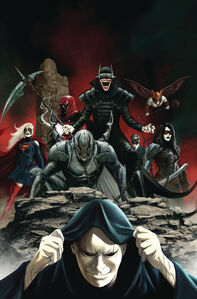 Deathbringer with The Infected and her master, against Lex Luthor 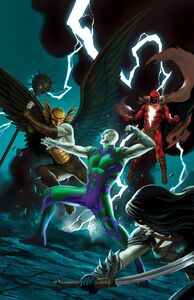