Abusive Protagonist
Donna Lou Retton Tubbs-Brown (born 1976) is the the deuteragonist of the FOX animated TV series The Cleveland Show. She is the wife of Cleveland Brown, biological mother of Roberta and Rallo Tubbs, step-mother of Cleveland Brown Jr., and ex-wife of Robert Tubbs. At first thought to be Cleveland's soulmate, she later turns out to the biggest threat in his life over the course of the series, even bypassing Loretta's villainous role in his life and proving far worse and sadistic.

She is voiced by Sanaa Lathan.

Donna Tubbs was born in 1976, to Dee Dee Tubbs and an unknown father, who left Dee Dee long before his daughter was born. To this day, Dee Dee still has no idea who the father is, as proven in "Mr. & Mrs. Brown". While Dee Dee was pregnant with Donna, she was at the height of her career, as a member of the famous vocal quartet, "The Towlettes", who sang about then-topical events such as the civil rights movement and Vietnam. Dee Dee could not risk her job, nor could she abandon her child, and yet she could not manage to handle the two things at the same time. So, she gave Donna to her brother, Kevin Tubbs and he took care of her.

Very soon after gaining custody of Donna, Kevin decided he was a woman and became a transgender. This was when Donna was still a baby, so she did not remember him as a man and grew up, thinking she was born a woman. Kevin was henceforth referred to as "Auntie Momma", at least by Donna. Dee Dee was completely absent from Donna's life at this point, even long after her job as a Towlette ended, because she just didn't have the guts to go back to her daughter, after she so carelessly abandoned her like that.

As a teenager, Donna attended Stoolbend High School and became good friends with Cleveland Brown, who secretly loved her but never got the chance to admit it. Donna fell in love with another guy named Robert and he became her boyfriend for the majority and remainder of her high school years, much to the silent disappointment for Cleveland. Episodes such as the "Pilot" expose how sleazy and misogynistic Robert was toward Donna and how much nicer of a boy Cleveland was. Despite this, Donna still chose to stay with Robert but still remained a true friend to Cleveland.

When Donna grew up and became an adult, she married Robert, holding up a promise she mad prior in "Hot Cocoa Bang Bang", when she said she'd marry anyone who saved her from drowning in a mall fountain, who was of course, Robert. She and Robert and bore two kids, Roberta and Rallo, who they raised in Robert's run-down apartment building. Robert was a very neglectful and uninvolved parent and on the rare occasions he did take care of the kids, he left a bad influence on them, teaching them how to cuss, do drugs, and commit felons.

In 2002, Robert and Donna entered a dance competition and made the theme of their dance, 9/11, with Donna playing Osama Bin Laden and Robert playing a Seal Team Six member. They both lost to LeVar and Evelyn, because it was too soon for a 9/11 themed dance. Robert blamed Donna for their loss and said he wanted a divorce, as seen in a flashback in "Dancing With the Stools". Whether or not this actually led to their divorce is ambiguous but very unlikely, as Rallo was 5 years old at the start of the series, which took place in 2008 and there was no way Robert divorced Donna two years before the birth of their son, who remembers the days of Robert being his father, fondly, so it's most likely that scene was just a gag.

After Robert dumped her and left her with custody of the kids, Donna bought a house and took up a job at Stoolbend High School, working as the secretary for Principal Farquhare. Her job was thankless and unforgiving but she did it to raise her kids. However, despite her efforts, she still needed a man in her life.

Throughout her adult life, Donna took up an interest in the flute and became skilled in playing the instrument. On some occasions, Donna would publicly perform with her flute and make money off of it but this was just an occasional thing for her and never became a regular career, so she still kept her job as a principal's secretary.

Donna would become friends with her neighbors such as her next-door neighbor, Arianna the Bear, a talking bear and a devout Christian, who tried to motivate Donna to remarry and find a new husband, by giving her constructive criticism, which really only came off to the latter as presumptuous judgment. Donna also became friends with her across the street neighbor, Kendra Krinklesac, an obese redneck girl, who was much nicer to Donna than Arianna, but at the same time, was also much stupider and really served as more of a "comic relief" friend to her, than anything. To a lesser extent, Donna became friends with her male neighbors, Tim the Bear (husband of Arianna), Lester Krinklesac (husband of Kendra), and Holt Richter, (single next-door neighbor).

Additional relationships Donna had were with Yvette, a single party girl, who was proud of being single and helped Donna with celebrating her life as a single woman, by taking her out to nightclubs and partying with her. Donna would also become enemies with Fern Stapleton, a rich white single mother, who loved bragging to Donna about how she was superior to her because she was richer and donated to charity.

In the "Pilot" episode of The Cleveland Show, Cleveland Brown and his son, Cleveland Junior went back to Stoolbend and met with Donna. Cleveland and Donna were happy to see each other again and after Donna heard that Cleveland had long since divorced his ex-wife, Loretta Brown, she saw this as an opening for them to get back together again. By the end of the episode, Cleveland and Donna had gotten married and the kids from both sides of the family all became stepsiblings and thus began The Brown-Tubbs Family.

In "Ladies' Night", Donna started to miss Yvette and the other party girls from that friend group, after Arianna and Kendra were being too annoying for her. However, being married, she would no longer fit in with her old friends, so she called them up again and lied to them that she was still single.

In "Mama Drama", Dee Dee Tubbs came back into Donna's life again and Donna was happy to be together with her mother again. Donna was not mad at her mom for leaving her as she understood her reasoning entirely. Since then, the two have spent plenty of time with each other and caught up on all of their lost time.

Following the cancellation of The Cleveland Show, Donna moved into Quahog, along with the rest of the family in the Family Guy episode, "He's Bla-ack!".

After moving back into Quahog, Donna became friends with Lois and Bonnie.

In the Family Guy episode, "Candy Quahog Marshmallow", Donna's mother killed herself. How this affected Donna's life or what this meant for her was completely ignored, as Cleveland didn't bother to go to her funeral.

Donna Tubbs-Brown is an adult African-American female with black hair and cinnamon lips. She wears a white shirt, powder-blue pants, powder-blue slippers, golden pearl earrings, and a golden necklace. Her lush black hair is also just a wig she wears. Underneath this wig, she has short, hideous gray hair, which really goes to show her true age. As for the rest of her body, large breasts, and a firm and large posterior, which matches the fact that her last name is "Tubbs".

Although she's generally a good person, she is also a very consistent liar, and an aspiring adulterer, still being mildly in love with her ex and attempted to abandon Cleveland for another guy.

She's also been shown on occasion to vow petty revenge on people she doesn't like, and acts unnecessarily cruel to her children on occasion, lies to her husband dozens of times and has been proven to hide even more secrets from him, even years into their marriage. 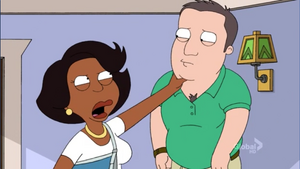 Donna strangleholds Holt and threatens after he finds out she's lying to her husband to get out of work. 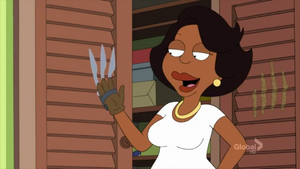 Donna scares Rallo away, with her Freddy Krueger fingers and calls him a "bitch". 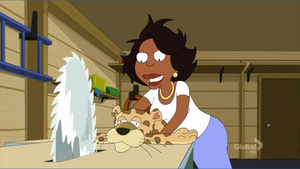 Donna, having completely lost her marbles, prepares to saw the head off of Larry the Leopard. 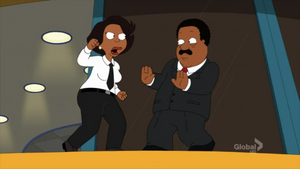 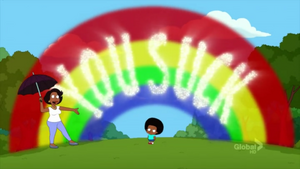 Donna insulting Rallo in the form of a catchy little tune. 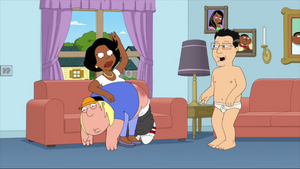 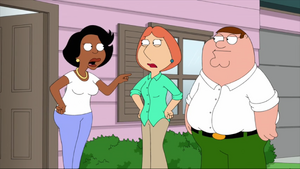