Humiliating and harassing the homeless.

Donnie is a minor antagonist in the second season of Todd McFarlane's Spawn. He is a drug dealer and worshiper of a small gang to push drugs into the alleys of Rat City. He is the secondary antagonist of the episode "Colors of Blood".

He was voiced by Brendan O'Brien.

Donnie is first seen beating up a homeless man while his friend Sticks smoke crack. He tells him and the other bums to keep out of the alleys, but he and Sticks fled from the scene as Sam Burke and Twitch Williams pull up their police vehicle.

He is later seen with Earl walking down the streets with their leader, setting up their work, and selling drugs to the riffraff. When a bum sees them what they are doing, Donnie and Sticks chase after him and killed him.

As Spawn watches the alleys, he sees the reverend and Donnie and Earl humiliating the homeless by making their women dance for them. As one of the bums had enough, Donnie kills the homeless woman for "disrespecting" him.

This made Spawn furious and acted, he kills the satanic worshipers and injured the reverend leader, who later was dragged and drop into the sewers.

He appears to be quite a ruthless and sadistic criminal, he also seems to be loyal to the drug reverend, caring about each other while Donnie was slowly dying. 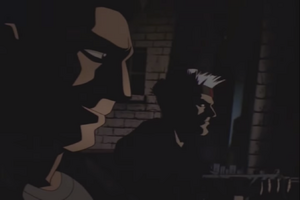 Donnie and Sticks looking for the homeless man. 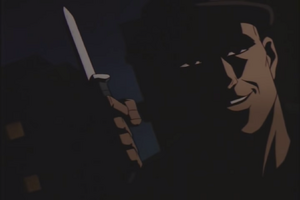 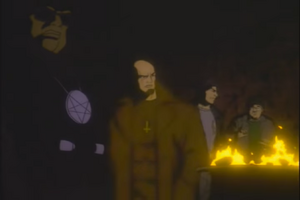 Donnie with Earl and the reverend harassing the homelesses.