Kidnap Ted for his son (first film; succeeded, but Ted was later rescued).

Kidnap Ted for the Hasbro CEO in order to create more teddy bears like him (sequel; failed).

He is Robert's father who desperately wants Ted to give to his son. He is also Ted's biggest fan and arch-nemesis.

He was portrayed by Giovanni Ribisi, who also played Parker Selfridge in Avatar and Tim Briggs in Contraband.

Donny came from a lower-class background. His mother had presumably left him with his father, who had one-night stands in front of him. When he saw Ted on TV one night, he immediately liked him and wanted one of his own. However, when he asked his father (who was making out with a woman on the couch) if he could have him, he refused since he had already given him a present: a rake. After his father tells him to go to his hammock, Donny felt heartbroken and took one last glance at the TV screen of young Ted before reluctantly leaving.

When Robert, his son, was born, a grown-up Donny vowed to be the best father ever and let his son have anything he wants — including Ted (which may have contributed to Robert's nature). It's unknown what happened to Donny's wife, but given his stalking attitude, it's possible that she may have left or divorced him.

Donny is first introduced in a positive way. He approaches John and Ted in the park with his son Robert. Donny had remembered Ted from an interview he had years ago, where the host kept on saying prejudiced jokes because he thought Ted was ALF. He offers to buy Ted from John for Robert, but he refuses and he's a little insulted by Robert's actions towards Ted.

Later, Donny's true nature begins to take a darker form when he appears outside of the grocery store Ted works and asks Ted why he's alone. Ted pretends that he isn't alone and that Christ is with him. Sooner or later, Ted leaves with Tami-Lynn.

Finally, Donny and Robert kidnap Ted and take him to their old house, which is also their secret hideout. There, Donny's obsession with Ted comes into full circle. On the walls are hundreds of tapped magazine cut-outs of Ted as a kid and an adult. When Donny tells Ted he belongs to Robert now and that the former must do as the latter says, Ted rudely criticizes his getting away with kidnapping and says the "F" word when sarcastically complimenting this example, but Donny yells loudly at him for swearing, scaring Robert. Noticing this, Donny quickly apologizes to his son for this. Donny reveals that when he was young, he asked his dad for a talking teddy bear, but he said no; it was then that he swore that if he ever had a son, he'd never say no to his son again. He also showed Ted a basement full of destroyed teddy bears that he had used to fill Ted's place, only to realize eventually that none of them were real enough.

Donny sends Ted and Robert upstairs to play whilst he goes downstairs to dance in private. Before Robert violently rips Ted's ear off for swearing with Jesus' name and the "F" word between the last two parts of His name, he says that like his father, he needed to be punished, suggesting that his father abuses him. Ted tricks Robert into playing hide-and-seek with him and he sneaks downstairs to call John. He tells John who took him and that he thinks Donny and Robert may be lovers, but the phone is quickly disconnected by Donny.

Donny and Robert put Ted in a big bag and place him into the trunk of the car to escape John. It is then that John and Lori smash into the back of Donny's car, breaking the back window and allowing Ted to escape, but during so, his stomach is ripped a bit. Ted runs into a nearby building and he's pursued by Donny. As Robert runs at John and Lori demanding "his" teddy bear back, John punches Robert in the nose and knocks him out (to Lori's shock), saying that he deserved it. Donny catches up with Ted into the building, which, in terms, is Fenway Park. Ted crawls up a stadium, but he's stopped by Donny who offers him love, rocking horses, and dancing, but of course, Ted refuses, telling Donny they're far apart from it. Donny quickly grabs him and throws him onto the field, ripping him in half by accident and draining the magic from him, killing him. Immediately, Donny runs away from a passing police car before Ted is brought back to life by Lori, wishing her life back.

In the end, Patrick Stewart (narrating the whole Ted story) reveals that Donny was arrested for kidnapping a plush toy, but the charges were dropped when he and the police realized how completely stupid that sounded.

After having failed to capture Ted in the first film, Donny is now working as a janitor at the Hasbro Toy Company. He discovers that Ted's imminent court case is on the news, and decides to use this to his advantage by convincing the CEO to hire their best lawyer to ensure that Ted loses his case and retains his status as property. He also wants them to capture Ted and study him in the hopes of discovering the secret to creating more live teddy bears.

Later on, after Ted storms off to get away from John and Samantha, Donny stalks him and follows him into the New York City Comic-Con. He disguises himself as a Teenage Mutant Ninja Turtle and asks Ted for a picture, but when he reveals himself, Ted runs away. As Ted is contacting John and Samantha, Donny appears behind him and knocks him unconscious.

Just as Donny is about to cut Ted open with a kitchen knife, John and Samantha arrive at Comic-Con and save Ted. The CEO then abandons Donny out of fear for being sued or charged for potential crimes. John furiously confronts Donny and punches him in the face. Enraged that he will never have his own Ted, Donny decides that if he cannot have a Ted for his own, no one can. As Ted, John and Samantha are leaving, Donny cuts the cables holding up a model of the Starship Enterprise, hoping the model will crush Ted. His plan fails utterly, however, when John winds up being hit by the model instead, which gets him sent to the hospital. When Donny hides from the security among the Ninja Turtle cosplayers, Ted exposes him by playing Tiffany's "I Think We're Alone Now", making him dance and allowing security to apprehend him. With Ted now contributing to humanity and authorized as a person, Donny is arrested and is facing charges for kidnapping and attempted murder.

Donny is an obsessive, alcoholic, violent stalker. He can't accept when things don't go his way and he was apparently stuck in a child-like emotional state. He likes Tiffany's song, "I Think We're Alone Now" which leads to his defeat since Ted uses Donny's fondness of the song to make him dance to the song and expose him.

He dislikes profanity, usually responding with a scream or violence. At times, he'll simply say not to swear, though ironically, in the sequel, he curses when he is arrested; most likely because he is angered that he is caught.

It's implied that maybe Donny has a softer side, as he tries his best to be a good parent. When Robert was born, Donny promised himself to never say no to him and be the greatest father Robert could ever have. His neglectful upbringing most likely contributed to his current mental state. 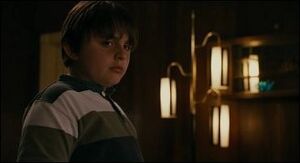 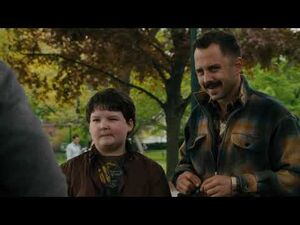 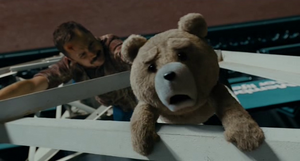 Donny trying to retrieve Ted to his hands, while Ted tries to escape. 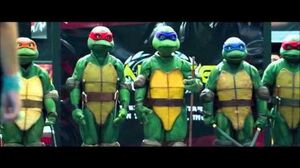