Comedy (in his mind, at least)
Weaponry (particularly with axes)

Be friends with Cleveland (failed)

Donny is the minor antagonist on The Cleveland Show. Specifically, he is the main antagonist of the third-season Halloween episode "Nightmare on Grace Street". He is a master of puns and the would-be friend of Cleveland Brown, should he have been shunned from his regular friend circle.

He was voiced by Danny Smith, who also voices Ernie the Giant Chicken in Family Guy.

Donny was among Cleveland's new group of friends after he leaves Lester, Tim, and Holt when he is embarrassed by Lester striking him out.

He returns as the main antagonist of the Halloween special "Nightmare on Grace Street," where Cleveland repeatedly rejects Donny because of his bad joke-telling which annoys him (including Terry, Lester, Tim & Holt). In the jack'o lantern challenge, Donny annoys Gus and everyone by making another bad jokes with teleprompter. After Cleveland, Terry, Lester, Tim & Holt win the jack'o lantern challenge, Terry invites everyone over to his house for a celebration party which everyone accepts. As Cleveland contacts Donna that he'll comeback to home late, Donny gets uninvited to Kimple's party by Cleveland, much to Donny's dismay. On Halloween, Cleveland, Roberta, Jr. and Rallo are trick or treating at Wally Farquhare's House until Donny disrupts with a bad joke again. Wally, annoyed by Donny's bad jokes, forbids to giving candy to anyone and shuts the door. The kids complains to Cleveland that Donny ruined their fun.

Finally, to prove he is brave to Rallo Tubbs, Cleveland tells Donny to get lost and take a hike after he costed them their candy at Wally's House. Tired of getting rejected by Cleveland, Donny has a psychotic break and tries to kill Cleveland by breaking into his house with an axe to exact revenge on him for being snubbed.

Unfortunately for him, when Donny gets to Cleveland's house, he learns that he isn't home. So until he gets back, Donny instead decides to settle for killing his wife, Donna, and his son, Cleveland, Jr., chasing them around the house in an attempt to decapitate them with his axe. Eventually, Donny changes his mind about killing them (at least temporarily) and somehow subdues them instead (despite their occasional attempts to double-team him). Donny presumably then ties them up in Cleveland, Jr.'s, room and waits for Cleveland to come home, under a disguised as Donna.

When Cleveland and Rallo get back home, Donny attacks them with his axe and almost kills Cleveland when he makes another bad jokes that Cleveland ridicules at it, leading to Donny attacking him and ensuing struggle, but Rallo sprays fluid from Junior's WD-40 costume onto the floor, allowing Cleveland to shove Donny out the window with full force. While Donny starts slipping on the WD-40 fluid, his last words are "I hate black people!" before falling out the window and plummeting below to the ground, killing him. This revelation that something Cleveland had figured to be true about him. Donny's body was seen with a gash on the side of temple from the axe due to the impact. The family then sings The Black Eyed Pea's "I Gotta Feeling" to celebrate Cleveland and Rallo for finally proving their bravery to Donna. As they sing, Gus takes and hauls away Donny's body in the trunk of his car to be made into his "turkey sandwiches."

Donny was a heavy-set, middle-aged Caucasian man who stood at a height about equal to Cleveland's. He had blond hair and wore red, thick-framed glasses, a lime green leisure suit, a white undershirt, a blue tie, and bright, red pants.

When first introduced, Donny seemed like a nice, congenial, well-meaning man. He was bright, fun-loving, and very social, enjoying the company of people and, of course, telling jokes and puns. Initially, he was very polite and friendly toward Cleveland, but it was clear that his personality was not one that would mesh with him or any of his friends, as he, Terry, Lester, Tim, and Holt were very clearly and visibly annoyed by him.

After being rejected by Cleveland one too many times, however, Donny's personality immediately cracks. He mentally snaps and becomes insane, conniving, and full of rage toward Cleveland, the man whose friend he had only desired to be. His newly-adopted murderous nature drives him to do whatever it takes to exact revenge on Cleveland, and all who are close to him, for humiliating him and blowing him off. He becomes truly evil and psychotic, registering a near-perpetual evil grin on his face (that he holds consistently on his face before and during his attempt on the lives of the Brown-Tubbs family) and even unleashing exactly six evil laughs and chuckles.

Interestingly, despite all of this, Donny maintains his sense of humor, continuing to crack jokes and one-liners even during his attempts to kill Donna and Cleveland, Jr., and during his attempt on Cleveland and Rallo later on. For example, when he chops off a small tuft of Donna's hair, he jokes, "You get a haircut? No, I got 'em all cut!" When he is about to kill Cleveland, he cracks, "Time for my axe to make your body spray blood!", making a pun out of the product Axe Body Spray. This ability to crack these jokes is likely Donny's lingering sanity peeking through his psychosis. It is only when Cleveland does not understand the aforementioned pun that Donny loses the last of that sanity, goes into a full-on villainous breakdown, and steps up his effort to murder Cleveland.

It can also be assumed that Donny was a stealth racist, judging by his final words before his death. But given that he said it just as he was defeated, it could possibly have just been a diss to Cleveland that he didn't mean. But given that his sanity was fully gone by that point, he might very well have meant it. 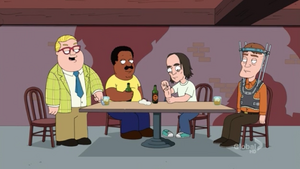 Donny's debut in "How Cleveland Got His Groove Back". 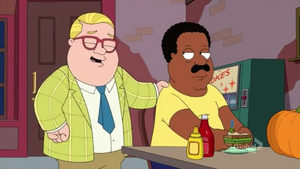 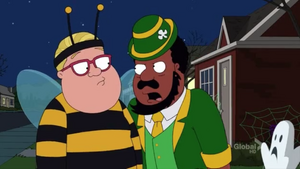 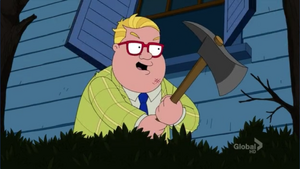 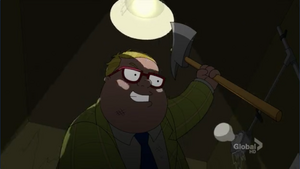 Donny in the dark, Oh! Get it? 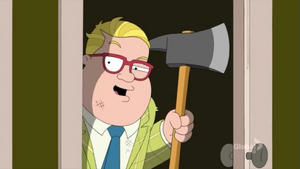 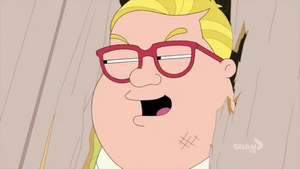 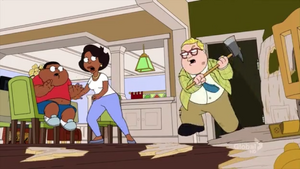 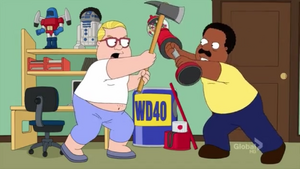 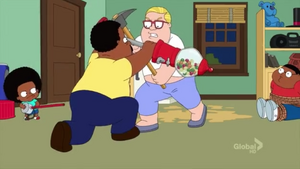 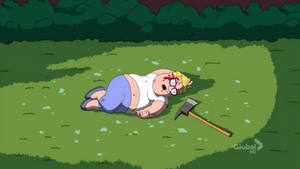 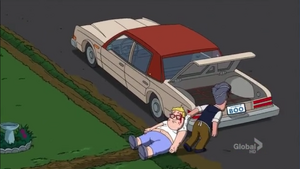 Gus dragging Donny's corpse away in the latter's final appearance. 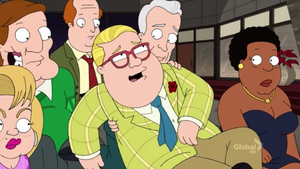 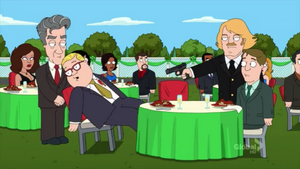