Nature of the Beast

To kill who he can (partially succeeded) and make Rich kill Julia and her family (failed).

Donovan Warder is the main antagonist of the 2007 direct-to-TV film, Nature of the Beast. He is the alpha werewolf who is responsible for turning the film's protagonist, Rich, into a beta werewolf.

He was portrayed by Eric Mabius.

Not much is known about Donovan's past, though he briefly stated that he's lived for 200 years. It is unknown whether or not Rich was his first beta, although it's possible given he stated in the film that he preferred to "hunt alone". It is implied that at one point, he killed a man because he wanted to move into his house. He eventually became one of Rich's college professors, and one night, he took him and a couple of friends of his, Danny and Gavin, to a bar for drinks. It is established there that he really knows how to get with the ladies with literally only one look at them. When they decided it was time to leave for the night, Donovan stayed behind.

As they walked home in the middle of the night, Rich and his friends made a stop because Danny had to urinate while Gavin was throwing up. Unbeknownst to them, Donovan had been following them and was fully transformed, ready to take one of them as a pack member. After he jumped out of a tree and killed Danny, he chased both Rich and Gavin  and managed to bite Rich in the butt before a night watchman came over and scared him off. But before leaving the scene completely, he apparently took Danny's body to get rid of any evidence.

Four years later, after Rich had proposed to a woman named Julia, she had discovered he was a werewolf and they went out to find the alpha so they could kill him, and have his curse lifted. When they go to the same bar Donovan took Rich to four years earlier to discuss the alpha's identity, Donovan was apparently following them. Once he becomes acquainted with him again, Rich seems happy to see him, though slightly surprised that he knew where he was. It was only in a matter of seconds that Rich realizes Donovan is the alpha through his senses. Julia, who is unaware of the whole situation, misunderstands Rich when he whispers that he's "the guy" and offers him the position as best man for their wedding. Donovan happily agrees as well as invites them to his house for dinner to discuss the plans.

After Rich takes Julia aside, and tells her Donovan is the alpha, he decides that when they drive over to his house, he is going to shoot him with her dad's hunting rifles. Unfortunately, once they park his car to get the weapons from the truck, they find out Donovan stole them all as it is completely empty. They hear him howling, and they drive away in the car. As they're driving, Donovan jumps on the top of the car and nearly rips the top completely off, but they drive over to the police, causing Donovan to run away, unnoticed.

Once Rich and Julia arrive over to her family's mansion for dinner, they discover Donovan has just arrived and seems to be getting along with everyone. Rich takes Donovan aside and threatens him to leave. Donovan, however, insists that Rich would kill tonight. Rich fails to see how that's possible since there's no full moon. But Donovan has his own plan. Being the alpha, he makes Rich transform himself at his will and sends him to kill Julia and her family. He nearly kills Julia, but remembers her before he can do anymore harm, and then changes back. Donovan is disgusted by this and tries to tempt Rich by saying that he could give him hundreds of women, as well as eternal life and the satisfaction of "every hunger". Rich of course, rejects his offer. Donovan then takes one of their guns that he stole from his pocket and places one of its silver bullets in his hand, showing that it  only gives him a slight little burn.

Julia's family show up, armed and ready to shoot Donovan. Donovan transforms with silver bullets firing at him all at once, only for  the wounds to heal almost immediately. He attacks the family and tries to kill Julia's father, but Rich willingly transforms and is able to hold him off until he lures Rich into the woods. They fight, though Donovan pins him down and gains the upper hand. It seems like the end for Rich until Julia stabs him from behind with her wedding fork. He turns around only for her to stab him in the chest with her cake knife. This is apparently lethal and destructive enough to kill him as he sets on fire and burns to nothing but ashes as a result. The curse is then lifted and Rich is cured.

Being the alpha werewolf, Donovan possessed the most powerful traits: he could heal almost immediately (even with silver bullets), live hundreds of years, transform at will without the full moon (as well as transform his own betas and make them do his bidding), possessed unnatural strength and speed, and his wolf form was far more wolf-like and monstrous than that of Rich's. Some of his other traits due to his status as the alpha included an extra set of incisors, long prehensile toes, and an over-sized penis. 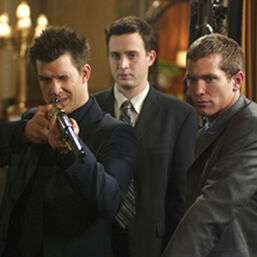 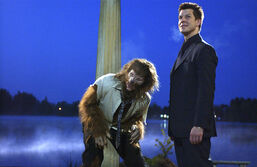 Donovan with Rich after he's transformed him 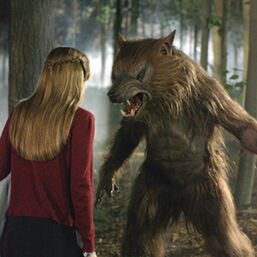 Julia about to kill Donovan
Add a photo to this gallery