Frycook at the Krusty Krab (in Hero's Choice)

DoodleBob is the main antagonist of the SpongeBob SquarePants episodes "Frankendoodle" and "Doodle Dimension", and the former's videogame sequel Drawn to Life: SpongeBob Edition for the Nintendo DS. He is an evil drawing of SpongeBob SquarePants created by the "Magic Pencil" who seeks to replace his original counterpart.

He was voiced by Paul Tibbitt, who is also a supervising producer and writer of SpongeBob SquarePants.

Despite having a limited grasp of language and being quite chaotic in his mannerisms, DoodleBob demonstrates a desire to possess a life like SpongeBob. He also demonstrates some super-abilities, such as effortlessly swinging a decent-sized rock over Patrick's head. During his confrontation with SpongeBob which resulted in the pencil snapping in two, DoodleBob transformed his mouth into a pencil sharpener.

The episode starts off showing an artist at sea working on a new piece when he drops his pencil into the ocean. His pencil lands near SpongeBob's house, causing SpongeBob and Patrick to panic.

SpongeBob examines the pencil and begins to doodle with it. After experimenting with drawings that come to life, such as a jellyfish and Patrick's crude rendition of Squidward, the two decide to play a prank on Squidward by having a crude doodle of SpongeBob knock on his door. The prank goes awry as DoodleBob swings Squidward around and then runs off with the pencil. SpongeBob and Patrick find DoodleBob in a poorly drawn sketch of SpongeBob's pineapple house.

When the two approaches, DoodleBob delays them with a pit trap and runs off again. They come across DoodleBob babbling and brandishing the pencil in an empty field, likely in the midst of it trying to recreate something else. DoodleBob throws SpongeBob to the side and conks Patrick on the head with a rock. However, SpongeBob manages to get a hold of the pencil and violently erases DoodleBob when the drawing runs into a rock during his attempt to flee.

In his fury, SpongeBob overlooks an arm that inches towards SpongeBob's house. Climbing up the stairs, it reaches his bedroom and reclaims the pencil to redraw its body. DoodleBob then declares his intention of taking SpongeBob's life for his own and pursues SpongeBob while erasing portions of his house. While DoodleBob does succeed in erasing half of SpongeBob, the sea sponge grabs the pencil and causes it to break. He redraws himself, but clumsily loses his half of the pencil when he flings it. However, DoodleBob is foiled when SpongeBob notices the doodle's foot fusing to a sheet of paper and uses another within a book to entrap DoodleBob. Returned to his original two-dimensional form, DoodleBob smiles and SpongeBob hangs the drawing in his living room.

When SpongeBob and Patrick accidentally cause Sandy's portal machine to warp them to a blank white dimension, the duo discovers everything they draw with the magic pencil comes to life, and have fun with it until Patrick draws a doodle of SpongeBob, which is revealed to be DoodleBob. He terrorizes them once he grabs the magic pencil. He turns SpongeBob and Patrick's doodles against them by drawing angry eyebrows and mustaches on them.

DoodleBob later kidnaps Patrick and ties him to flagpole of a doodle castle. SpongeBob attempts to charge into the castle but is attacked by DoodleBob's Mini Doodles. SpongeBob and Patrick draw a doodle balloon and attempt to float away, but DoodleBob grabs the balloon. The two manage to cut the string, with DoodleBob floating into the void of the blank dimension with his miniature clones.

DoodleBob makes a cameo in the episode as a doodle drawn under Mr. Krabs' desk.

DoodleBob is used by SpongeBob as a distraction against the Evil Syndicate.

The game begins the same way the episode does in which an artist at sea drops not one but two pencils into the sea where at the time Patrick is counting his bellybutton hairs. When the pencils hit the ground, Patrick doesn't run around screaming this time. This game takes place after the events of "Frankendoodle" as evidenced when Patrick has a hard time remembering what not to draw. He starts to remember the details of what it is as he's drawing it. After he's finished drawing DoodleBob, the drawing comes to life once more and starts to terrorize all of the ocean after grabbing the second pencil that fell.

Patrick then runs to SpongeBob to tell him what happened but forgot what he was supposed to tell him. After a few moments, Patrick remembered and told SpongeBob about DoodleBob's revenge and so the two decide to create a hero to fight DoodleBob with. This is similar to the first Drawn to Life game except for this time SpongeBob names the hero instead of the player, calling it "DoodlePants." After this, DoodleBob captures SpongeBob and puts him in a cage (This is also similar to the beginning of the first game where Wilfre captured the mayor of a town eventually named by the player and put him in a cage of Shadow Goo. The similarity is that both of these rescue missions are tutorial levels).

DoodleBob has drawn quite a few new drawings that will try their best to stop DoodlePants from winning. He even took the time to draw a Doodle robot. Some of the new drawings of DoodleBob's include Doodle bats, Doodle Sandy, and Doodle rammers. DoodleBob is fought three times, ultimately culminating in a battle with a giant version of DoodleBob. After DoodleBob's final defeat, SpongeBob realizes that DoodleBob never meant to harm anyone he just wanted a few friends. He realizes that when they discover that DoodleBob drew an exact replica of Bikini Bottom on the Moon. And after a scene where SpongeBob draws DoodleBob a happier face, the credits roll and SpongeBob and friends say goodbye to DoodleBob and DoodlePants, who stays behind with DoodleBob.

He was the main antagonist in this online game Hero's Choice.

He appears as a boss in the videogame SpongeBob SquarePants: Bikini Bottom Pursuit. 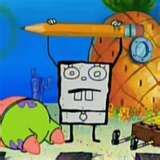 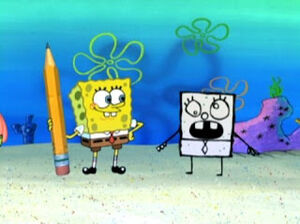 DoodleBob standing next to SpongeBob. 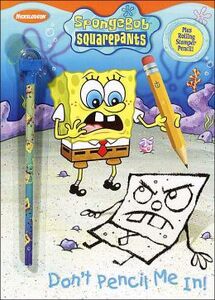 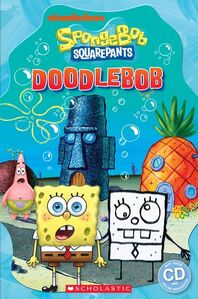 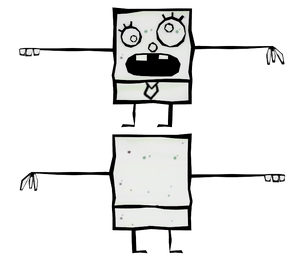 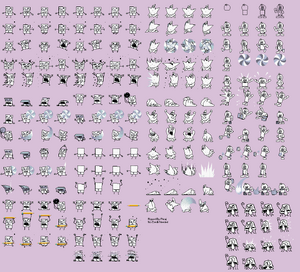 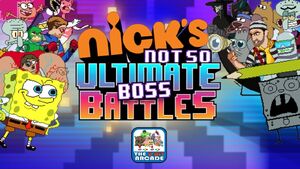 DoodleBob in Nick's Not So Ultimate Boss Battles.

Retrieved from "https://villains.fandom.com/wiki/DoodleBob?oldid=4070932"
Community content is available under CC-BY-SA unless otherwise noted.