Dispose of Doofenshmirtz and take over the Tri-State Area for itself (failed).

Doofenshmirtz's Mecha is the main antagonist of the Phineas and Ferb episode "Phineas and Ferb-Busters!". It was a small robot that used to serve for Heinz Doofenshmirtz, but later rebelled against him after being turned into a giant mecha caused by a power surge.

It was voiced by Kevin Michael Richardson.

When Doofenshmirtz starts to tire himself of Norm's outrageous antics (especially the time when Norm accidentally poured coffee on Doof's lap after tripping on a rug), he got himself a small robot and is very impressed for its blender attachment of making tasty smoothies. As Perry the Platypus heads by to Doofenshmirtz's place, Doofenshmirtz traps Perry in a straitjacket, stating that it was hand-made by the robot itself. Doof takes pride for the robot for its competence as it happens to be more stronger and efficient than Norm (despite its small size). Unknown to Doof, Norm overhears this from the closet and is very heartbroken.

Needless to say, a power surge (caused by Phineas and Ferb's radiant power machine) struck around Danville, causing many electronic appliances to run amok and create havoc against the citizens. As such, Doofenshmirtz's robot was affected by the power surge and transformed itself into a giant mecha, much to both Doofenshmirtz and Perry's surprise. With a new sentient personality developed by the power surge, the mecha rebelled against Doofenshmirtz and attempts to put him down by shooting with lasers, forcing to latter to flee. Perry frees himself from the straitjacket and attempts to fight the mecha to save Doof, but the annoyed mecha just flicks off Perry from the building before turning its rage towards Doof, much to Perry's dismay.

Grabbing Doof by the lab coat, the mecha attempts to kill him by putting him into the blender. Doofenshmirtz called out for Norm to help him, but Norm refused as he seemingly had enough of Doof putting him down and wants to make coffee for the mecha as his new boss. However, Norm seemingly slips again and the coffee spills onto the mecha, shortening it out. This allows Doofenshmirtz to jump safely into Norm's hands while the mecha falls down to the floor deactivated. Eventually, Norm pointed out that there was no rug to slip on this time, which made Doofenshmirtz realize that Norm purposely spilled the coffee to destroy the mecha to save him.

With the mecha destroyed, Doofenshmirtz thanks Norm and apologizes for his misgivings towards him. It was also revealed that Norm ran on squirrel power, which can explain why he was unaffected by the power surge, prompting an impressed Doof to declare that he ought to check through Norm's operation manual. Perry later found out that Phineas and Ferb's radiant power machine caused the power surge in the first place, so he permanently disabled it to ensure that it wouldn't happen again. 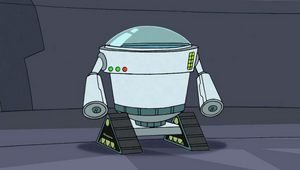 The robot as it was originally designed. 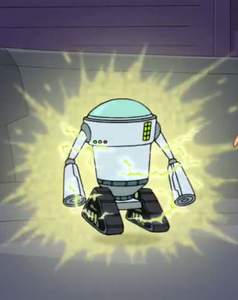 The robot being affected by a power surge. 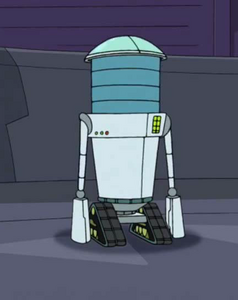 The robot starting to transform into a giant mecha. 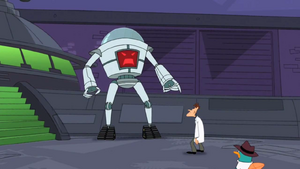 The mecha turning against Doofenshmirtz, planning to dispose of him and Perry. 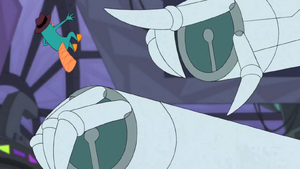 The mecha flicking Perry out from the building. 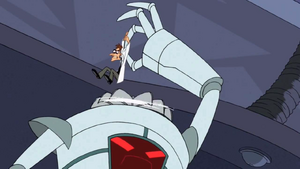 The mecha attempting to drop Doof into his blender attachment, much to Doof's anger. 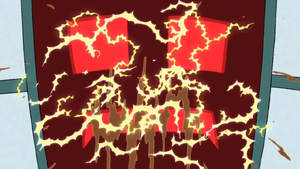 The mecha starting to shorten out after Norm spills some coffee. 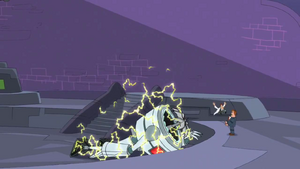 The mecha deactivates as Doof jumps down to Norm's arms.
Add a photo to this gallery

Retrieved from "https://villains.fandom.com/wiki/Doofenshmirtz%27s_Mecha?oldid=3331126"
Community content is available under CC-BY-SA unless otherwise noted.